The productivity of American workers rose just modestly in the spring, extending a worrisome issue that has persisted through this expansion. 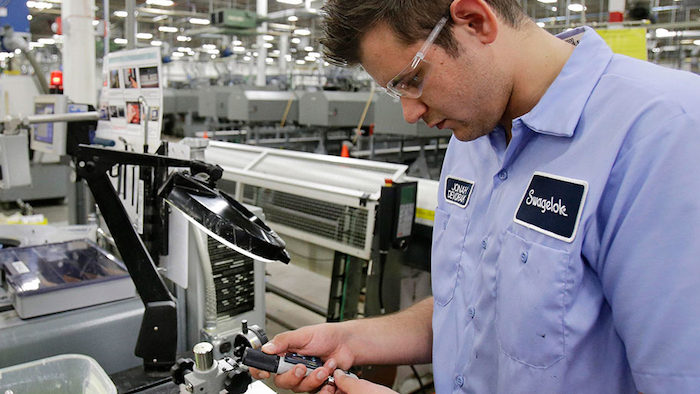 WASHINGTON (AP) — The productivity of American workers rose just modestly in the spring, extending a worrisome issue that has persisted throughout this expansion.

Productivity, the amount of output per hour of work, has been weak throughout the economic recovery, now in its ninth year. Many analysts say the issue is the biggest economic challenge facing the country.

For 2016 overall, productivity actually declined — the first fall in 34 years. Productivity last year had previously been reported as a slight increase of 0.2 percent. However, that gain evaporated as part of the government's annual benchmark data revisions. It marked the first annual decline in productivity since a 1 percent drop in 1982.

The small improvement in the second quarter reflected the fact that overall economic growth, as measured by the gross domestic product, accelerated to a 2.6 percent rate of increase compared to a 1.2 percent gain in the first quarter.

Since 2007, annual productivity increases have averaged just 1.2 percent. That's less than half the average annual gains of 2.6 percent logged in 2000 to 2007, when the country was benefiting from increased efficiency from computers and the internet in the workplace.

Rising productivity means increased output for each hour of work, which allows employers to boost wages without triggering higher inflation.

The challenge of boosting productivity back to the levels before the Great Recession of 2007-2009 will be a key factor in determining whether President Donald Trump will achieve his goal of boosting overall growth. The economy's potential for growth is a combination of labor force expansion and growth in productivity.

During the campaign, Trump pledged to double growth to 4 percent or better. But since taking office, his administration has projected a slightly lower but still ambitious goal of pushing annual growth back up to 3 percent. Trump's first budget projects that faster economic growth will produce $2 trillion in deficit reduction over the next decade, a forecast most private economists view as overly optimistic.

What happens inside a warehouse in Bessemer, Alabama, could have major implications not just for the country's second-largest employer but the labor movement at large.
Mar 30th, 2021

If organizers are successful, it could lead to a chain reaction of other unionization pushes at Amazon facilities.
Mar 29th, 2021
Follow Us
Most Recent