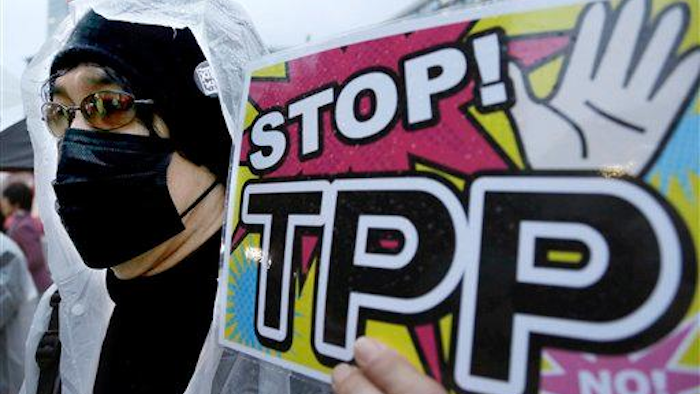 At issue now is the Trans-Pacific Partnership, a measure expected to call for lowering or eliminating most trade barriers among the United States and 11 other Pacific Rim nations. The pact is still being hammered out in closed-door negotiations.

It's a familiar theme. After all, former presidential candidate Ross Perot warned NAFTA would create "a giant sucking sound" as jobs left the United States for Mexico.

So far, the economic consequences of NAFTA have seemed mixed — not as dire as Perot predicted nor as positive as former President Bill Clinton once forecast.

The current Pacific Rim free-trade debate pits many fellow Democrats against President Barack Obama. Some Democratic critics have depicted the Pacific free-trade deal, and a companion trans-Atlantic one expected to follow, as "NAFTA on steroids."

As with NAFTA, which linked the economies of the United States, Canada and Mexico and created what is now the world's largest free-trade zone, the Pacific free-trade proposal generally has stronger support among Republicans in Congress than Democrats.

Up to now, Congress has shown little inclination to grant President Barack Obama trade promotion authority powers — called "fast track" — that allow only yes-or-no votes on trade agreements with no amendments permitted. Fast-track authority had been routinely granted by Congress to presidents in past major trade negotiations, including NAFTA.

Now, with Republicans in control of Congress, chances might seem to be stronger for free-trade legislation. But Gary Hufbauer, a senior fellow at the Peterson Institute for International Economics, predicted that Obama "is going to have a harder time bringing over Democrats than Clinton did back in that era."

Obama told a gathering of business leaders last month that he recognizes differences within his own party on free-trade agreements and understands how some fellow Democrats may have "legitimate complaints" about possible adverse consequences. It adds up to "tough politics," he acknowledged.

Democrat Sen. Elizabeth Warren of Massachusetts, a rising voice in the party and usually a close ally of the president, is among the skeptics. "We cannot afford a trade deal that undermines the government's ability to protect the American economy," she wrote in a recent letter to U.S. Trade Representative Michael Froman.

"A world where goods and services trade freely is a more fascinating — and prosperous — place to live," says David Abney, chief executive Officer of United Parcel Service, a company that would benefit from the proposed new free-trade agreements.

Major trade agreements entered into by the United States should "contribute to democratic global economic governance and to promote good jobs, full employment and rising wages," Hoffa said. "A key element, of course, is strong labor rights protections so that every worker in every country can exercise fundamental human rights on the job_without fear."

"Our experience in the past on free trade agreements has not been encouraging," said Robert E. Scott, director of trade and manufacturing at the Economic Policy Institute, a Washington-based think tank that gets much of its financing from labor organizations.

The U.S. Chamber of Commerce says NAFTA "has generated vast new opportunities for U.S. workers, farmers, consumers and businesses" and that trade with Canada and Mexico "supports tens of thousands of jobs in each of the 50 states."