Automakers have skipped some of their usual summer shutdowns to keep up with demand, causing fewer temporary auto layoffs. 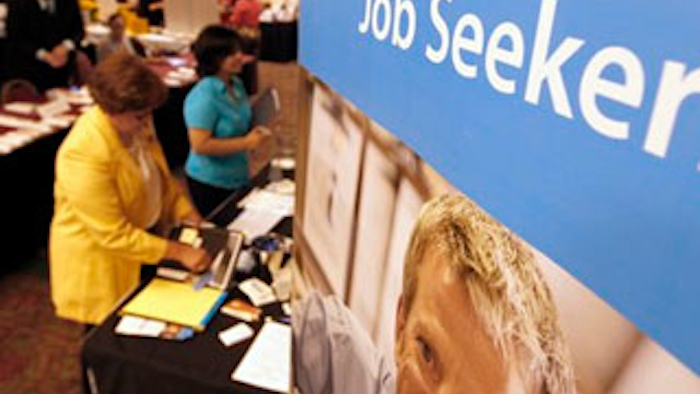 WASHINGTON (AP) — The number of people seeking U.S. unemployment benefits plunged last week. But a big reason is that automakers have skipped some of their usual summer shutdowns to keep up with demand, causing fewer temporary auto layoffs.

Economists expect the number of Americans seeking unemployment aid to go back up in coming weeks.

The auto industry's recovery has helped support the struggling U.S. economy. U.S. auto sales in the first half of the year jumped 15 percent over the same period a year ago. Sales of new vehicles surged in June. Automakers also began Independence Day promotions early, lifting sales at the end of the month.

The Labor Department adjusts the number of applications for unemployment aid to account for seasonal factors. But it underestimated this summer's drop in temporary shutdowns of auto plants. That distorted the seasonally adjusted data it released Thursday.

And that may largely explain why applications for unemployment aid tumbled 26,000 last week to a seasonally adjusted 350,000 — the fewest since March 2008.

"Take July with a grain of salt," Jill Brown, an economist at Credit Suisse, said in a note to clients. The auto shutdowns "often cause extreme volatility."

Automakers traditionally close their plants in the first two weeks in July to prepare them to build new models and their employees file for unemployment benefits. But Ford Motor Co. said in May that it would reduce its usual two-week closing to just one week. And Chrysler canceled the normal two-week shutdowns at three factories.

Applications for unemployment benefits measure the pace of layoffs. When they consistently fall below 375,000, it generally suggests that hiring is strong enough to reduce the unemployment rate. The number has fluctuated at or above that level since April.

At the same time, hiring has slowed sharply compared with the first three months of the year. Employers added only 80,000 jobs in June, the third straight month of weak hiring. The unemployment rate was stuck at 8.2 percent.

And wages have barely kept up with inflation over the past year, leading consumers to pull back on spending.

The economy isn't growing fast enough to prompt more hiring. The economy grew at an annual rate of just 1.9 percent in the first three months of the year. Most economists don't think growth picked up in the April-June quarter. And some predict that it weakened.

The Federal Reserve expects the U.S. economy to grow just 1.9 percent to 2.4 percent for 2012. That's half a percentage point lower than the range it estimated in April. The Fed also says the unemployment rate won't fall much further this year than it has already.

Yet the auto industry is enjoying a rebound. From January through June, U.S. auto sales ran at an annual rate of 14.3 million, far better than last year's 12.8 million. Many analysts predict 15 million sales next year.

Much of the increase comes from pent-up demand. The average age of a vehicle on U.S. roads is nearing 11 years. Many are wearing out and need to be replaced.

The higher auto production also has ripple effects: Many parts companies have had to add workers to keep up with demand.

Chrysler's first-half sales are up more than 30 percent over the same period a year ago.

Ford's sales rose nearly 7 percent in the first half of 2012. It cut in half the usual two-week shutdowns at six assembly plants and seven engine and parts plants, all so it could make 40,000 more vehicles this year.

Most other areas of the U.S. economy aren't faring as well. That's why some analysts think applications for unemployment aid could rise in coming weeks, once the Labor Department's seasonal adjustments no longer include the summer auto shutdowns.

"We have been disappointed for the past three months, and I will believe that payroll gains have improved up when I see it," said Joel Naroff, chief economist at Naroff Economic Advisors.