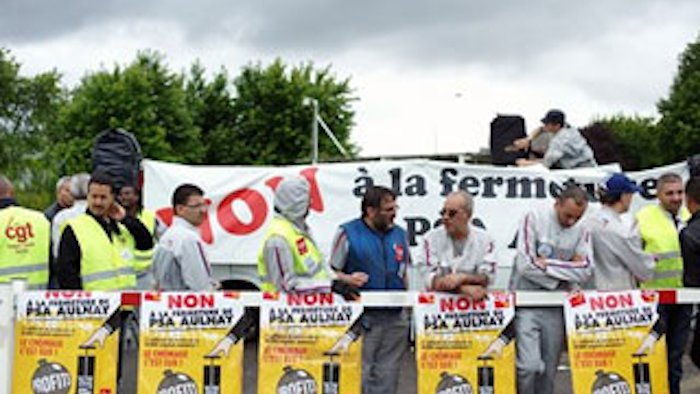 Workers at the plant in Aulnay-sous-Bois staged a protest strike in front of the site, one of France's biggest car factories and a bastion of automaking and autoworkers' unions. They said they would resume striking September 11.

Company management announced the job cuts and closure plan during a meeting Thursday with its worker representatives.

The company, which warns it faces a first-half loss of €700 million ($858.2 million) this year, is trying to save €1 billion as it struggles to compete in Europe's stagnant car market. It is suffering particularly amid a slump in sales in the recession-hit south of Europe, and saw sales plunge 20 percent in Europe in the first quarter.

The restructuring plan also includes cuts of 1,400 jobs at the company's Rennes factory and 3,600 jobs in other French sites. The company employs about 100,000 people in France and 209,000 people worldwide. The announcement came after the company announced plans last year to cut 6,000 jobs.

Chairman Philippe Varin, grim-faced, told reporters that the company is losing about €100 million per month. "No one will be left along the side of the road," he pledged.

The scope of the jobs to be cut startled even the government. A statement from the office of Prime Minister Jean-Marc Ayrault said the plan was "without precedent ... a veritable shock for all employees of the group, for the regions affected and, more broadly, for the entire automobile industry."

France's car industry was heavy hit by the economic crisis and was given a bailout under then-President Nicolas Sarkozy. Ayrault said a help plan for the industry would be worked out with all those concerned with Peugeot's restructuring plan and presented to the Cabinet by July 25.

About 250 striking workers gathered in front of the Aulnay-sous-Bois plant after the announcement.

Worker Abdallah Baih said, "I woke up this morning, started having breakfast turned on the TV and saw on the screen ...'The Aulnay site is going to close.' Anger. We really feel anger and it's unfair."

Peugeot's problems highlight the current woes facing Europe's carmakers. Unable to draw on government incentive schemes such as the "cash-for-clunkers" promotions launched in 2008-2009, manufacturers are suffering from falling sales.

European operations for Italian automaker Fiat lost €207 million in the first quarter this year with the number of new car registrations in the region plunged 26 percent to 81,469 units — far outpacing the market's drop of 6.6 percent in the quarter, according to the European Automobile Manufacturer's Association.

While Europe's largest carmaker, Volkswagen, notched up a 13.7 per cent increase in June passenger vehicle sales, it was the US and Asia-Pacific region that lifted the total. Announcing the June figures, the German carmaker warned of "considerable uncertainty" in Europe ahead in the second half.

Peugeot-Citroen shares were up 0.45 percent to €7.17 in early afternoon trading.

Peugeot is hoping a new alliance with General Motors Corp. will allow it to return to long-term profitability. GM has been working hard to return its lossmaking European operations to profitability. It's European Opel and Vauxhall units have been a drag on the company's earnings for a dozen years, including a $256 million loss in the first quarter and $700 million last year.

Under the alliance with GM, the American company became the French automaker's second-largest shareholder with a 7-percent stake, behind the Peugeot family, whose stake dropped from 31 percent to around 25 percent.

Peugeot says the deal will allow it to address tightening emissions targets in Europe and strengthen its position in emerging markets in a way not economically feasible on its own.

Daniel Vernet , who has worked at the Aulnay factory since 1977, maintained that the real motive driving the closure is the company's far-flung goals. "Peugeot coffers are not empty, but they need cash flow to complete construction of their factory in China and India. What happens here is to sacrifice French employees."