The Chamber of Commerce's lead immigration negotiator said he's hoping for a deal soon with the AFL-CIO on a new temporary worker program, but the sides are still apart on important details. The issue has emerged as perhaps the toughest obstacle to completion of comprehensive immigration legislation on Capitol Hill. 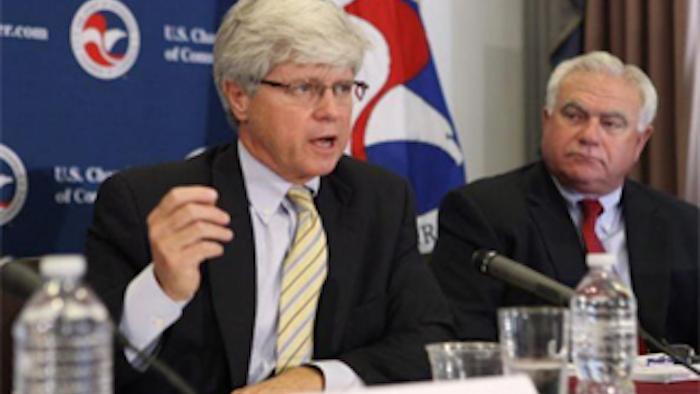 WASHINGTON (AP) — The Chamber of Commerce's lead immigration negotiator said Friday he's hoping for a deal soon with the AFL-CIO on a new temporary worker program, but the sides are still apart on important details.

The issue has emerged as perhaps the toughest obstacle to completion of comprehensive immigration legislation taking shape on Capitol Hill. Senators working on the bill gave the Chamber and the AFL-CIO the job of helping negotiate an agreement on the temporary worker issue.

Randy Johnson, the chamber's senior vice president for labor, immigration and employee benefits, told reporters at a briefing that points of contention include wages and the overall number of visas in the new program. He said the chamber sought 400,000 new visas for temporary workers while the AFL-CIO's opening number was much lower, in the low five figures.

Johnson said the chamber and AFL-CIO are still talking, but much of the negotiating work has now been kicked up to Sens. Charles Schumer, D-N.Y., Lindsey Graham, R-S.C., and others in the bipartisan Gang of Eight, which is trying to complete a bill in time to release it once Congress returns from a two-week recess in early April. In addition to the temporary worker issue, the bill would aim to secure the border, strengthen workplace enforcement and provide an eventual path to citizenship for the estimated 11 million illegal immigrants in the U.S.

"Having been through this I wouldn't say it's taking longer than expected, but it's been difficult," Johnson said of talks with labor. "The next week-and-a-half will tell the tale."

Andrea Zuniga DiBitetto, legislative representative for the AFL-CIO, said the labor group remains "absolutely committed, we are committed to working on comprehensive immigration reform, committed to citizenship and committed to honoring our agreement to come to agreement with the chamber."

The question of temporary workers has traditionally produced a stark divide between business and labor, with business seeking a large, low-cost supply of workers, and labor opposed to any guest-worker program that could threaten American laborers and produce questionable working conditions.

The issue contributed to the failure of the last serious attempt at immigration reform in 2007, and Schumer and Graham sought to head off such an outcome this time around by asking chamber President Tom Donohue and AFL-CIO President Richard Trumka to work together.

The talks have progressed in fits and starts. Last month the two sides agreed on broad principles, which was more progress than in the past but no guarantee of a final deal. Johnson said he'd hoped to be able to announce a deal Friday, but the groups couldn't get there.

Current programs for temporary workers in the U.S. are woefully inadequate to meet demand, business leaders say. There is a small visa program for seasonal, short-term, low-skilled workers but it only offers 66,000 visas a year. Meanwhile there are numerous industries — hotels, construction and nursing homes among them — that operate year-round and have labor shortages but no good way to sign on foreign workers. These industries and others end up employing large numbers of illegal workers.

The new visa program the chamber and AFL-CIO envision would fill that void. Separately, Senate negotiators are working on programs for high-tech and agricultural workers.

Johnson said workers coming in on the new lower-skilled visa program would not be tied to one employer, as short-term-worker visa holders now are, but would be able to move from one job to another. That's seen as an important detail for the workability of such a program. The cap on the number of visas would also fluctuate according to demand.

The chamber and AFL also have agreed to create a new federal bureau to inform Congress and the public about labor supply issues, but the role of that entity remains unclear. The AFL-CIO had pushed for a commission with authority to determine labor market needs, while the chamber has argued that businesses themselves were best suited to make such determinations.

Separately Friday, there were signs of progress from a House bipartisan group that's been meeting in secret to write an immigration bill. Most attention has focused on the Senate because it's expected to act first, but Democrats in the House group met Thursday to brief House Democratic Leader Nancy Pelosi, while the group's Republicans met Friday with House Speaker John Boehner. Through spokesmen, both leaders praised the group's efforts.

The House group is now expected to unveil its legislation sometime in April, though details remain unclear, including the shape of any path to legal status or citizenship for illegal immigrants.