U.S. employers added 165,000 jobs in April, and hiring was much stronger in the previous two months than the government first estimated. The job increases helped reduce the unemployment rate from 7.6 percent to a four-year low of 7.5 percent. 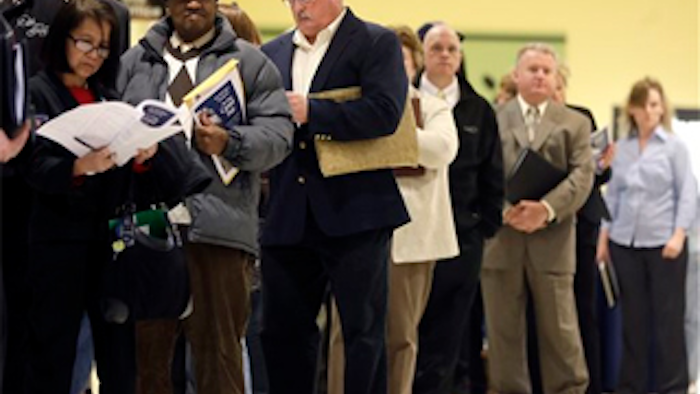 WASHINGTON (AP) — U.S. employers added 165,000 jobs in April, and hiring was much stronger in the previous two months than the government first estimated. The job increases helped reduce the unemployment rate from 7.6 percent to a four-year low of 7.5 percent.

The report Friday from the Labor Department was a reassuring sign that the U.S. job market is improving despite higher taxes and government spending cuts that took effect this year.

The government revised up its estimate of job gains in February and March by a combined 114,000. It now says employers added 332,000 jobs in February and 138,000 in March. The economy has created an average of 208,000 jobs a month from November through April — above the 138,000 added in the previous six months.

"This is a good report," said John Silvia, chief economist at Wells Fargo. "There's a lot of strength... It's good for the economy. It's good for people's income."

The stronger job growth suggests that the federal budget cutting "does not mean recession," Silvia said. "It does not mean a dramatic slowdown."

Stock prices soared when trading began on Wall Street at 9:30 a.m. Eastern time. The Dow was up 146 points in early trading.

The unemployment rate has fallen 0.4 percentage point since the start of the year, though it remains high. The Federal Reserve has said it plans to keep short-term interest rates at record lows at least until unemployment falls to 6.5 percent.

The hiring last month was broad-based. The only sectors of the economy that cut jobs last month were construction and government.

But some of the bigger job gains were in lower-paying fields, such as hotels and restaurants, which added 45,000 jobs, and retail, which added 29,000. Temporary help firms gained 31,000 positions.

The job growth is occurring while the U.S. economy is growing modestly but steadily. It expanded at a 2.5 percent annual rate in the January-March quarter, fueled by the strongest consumer spending in two years.

The global economy, by contrast, is slowing. The European Union warned Friday, for example, that the 17 countries that use the euro currency will shrink by a collective 0.4 percent this year. And unemployment across the eurozone is expected to hit an average of 12.2 percent. In Greece and Spain, it's forecast to reach 27 percent.

Both Fed Chairman Ben Bernanke and European Central Bank President Mario Draghi have suggested that governments need to focus on stimulating growth and not just on spending cuts and deficit reduction.

In April, more Americans said they had part-time jobs even though they wanted full-time work. That figure rose 278,000 to 7.9 million, reversing a steep drop the previous month.

Some economists worry that restaurants, retail chains and other companies are hiring more part-time workers in preparation for the implementation of health care reform. Companies with more than 50 full-time employees in 2013 will be required to provide health insurance to their full-time staff next year.

The revisions to the March and February figures were unusually large. Retailers, restaurants and hotels added 48,000 more jobs in February than previously reported. They accounted for three-quarters of that month's revision.

The government revises each month's job totals twice in the following two months. The revisions occur because many companies in the survey submit their responses late.

The average workweek for private-sector employees declined 0.2 hour to 34.4 hours, but average hourly earnings rose 4 cents to $23.87. In the past year, wages have risen faster than inflation.

The number of people who have been unemployed for more than six months dropped 258,000 to 4.4 million. Over the past year, the number of long-term unemployed has declined by 687,000.

A fire overnight at the Labor Department's headquarters shut down the building for most employees. Members of the news media were allowed in for the release of the jobs report.