Texas Gov. Rick Perry extolled the tax policies and regulatory climate of his state as he courted gun manufacturers that have threatened to leave Connecticut since the state passed new gun-control laws in response to the Newtown school massacre. 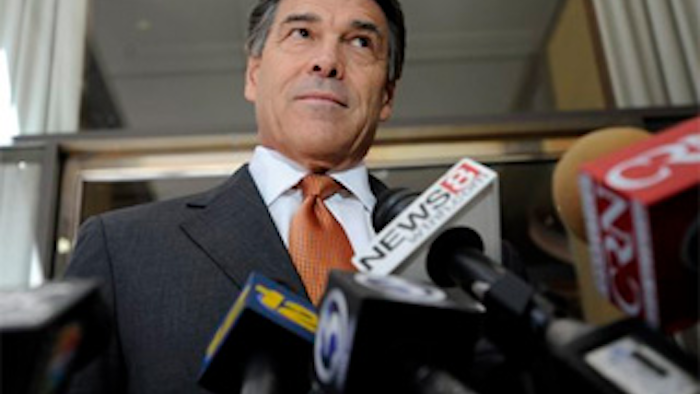 HARTFORD, Conn. (AP) — Texas Gov. Rick Perry extolled the tax policies and regulatory climate of his state as he courted gun manufacturers that have threatened to leave Connecticut since the state passed new gun-control laws in response to the Newtown school massacre.

Perry shot at a firing range at Connecticut's venerable Colt Manufacturing Co., one of the plants he toured, and met privately with company owners and other businesses at a downtown Hartford restaurant. At a brief news conference afterward, the Republican offered a conservative policy blueprint in a state run by Democrats.

"Are your tax policies really in the best interest of your job creators?" he asked. "Is your regulatory climate one of which really allows your citizens to be able to enjoy the freedoms that they can have or they should have or that they think they should have? Or are they going to relocate somewhere?"

While gun makers may be unlikely to leave behind their factories and skilled workforces, executives say Texas is an appealing location. Some also said the out-of-state attention was a contrast with Connecticut Gov. Dannel P. Malloy, who they say has shown little regard for a local industry that dates to the Revolutionary War.

Malloy, a Democrat, signed new gun restrictions into law in April, four months after 20 children and six educators were murdered by a lone gunman at Sandy Hook Elementary School.

Bartozzi contrasted Perry's interest in the business and the jobs it provides with what he called "less than flattering remarks" in recent months by U.S. Sen. Chris Murphy and Malloy about the gun industry.

Asked about the possibility of expanding in Texas, Bartozzi said, "That would make more sense. That would be more logical for us."

Mark T. Malkowski, president of Stag Arms in New Britain, said he's been in touch with Perry's office and met with the governor in Houston last month. He and Perry spoke about taxes, he said, and what Texas is doing "to keep it a very friendly place for businesses." Another topic was the cultural differences between Connecticut and Texas, which is perceived as less hostile to guns.

"There was nothing as much as a phone call from our governor asking us to stay," he said.

Malkowski also was getting a visit from South Dakota Gov. Dennis Daugaard on Monday.

Kelsey Pritchard, a spokeswoman for Daugaard, said the governor and state economic development officials were visiting Connecticut on Monday and Tuesday to meet with gun manufacturers.

The biggest obstacle to leaving Connecticut, Malkowski said, is that the company's 200 employees would have to uproot their families.

"That's the hardest part. The employees make up the business," he said.

Colt President and CEO Dennis Veilleux issued a statement saying Perry assured the company it would "always be welcome in Texas."

Malloy made an unannounced visit to the Texas governor's meeting in Hartford, where he welcomed Perry to Connecticut. He said the gun issue is particularly sharp here because of the school shootings.

"I don't think he understands that kind of loss and how it's affected people in our state," Malloy said.

Legislation enacted in April adds more than 100 firearms to the state's assault weapons ban and outlaws the sale of magazines capable of holding more than 10 rounds of ammunition.

Perry said taxes and regulations are factors in decisions not only by gun manufacturers, but by pharmaceutical companies, financial firms and other businesses about where to locate.

"We compete for every job, and we're doing a pretty good job at it," he said.

Perry also has made similar pitches in other states. He sought to talk up Texas for jobs in California's high tech, biotechnology, financial, insurance and film industries and urged Illinois employers to leave the state "while there's still time."