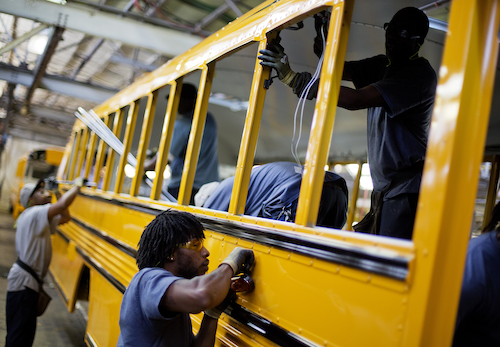 In this Friday, Sept. 18, 2015, photo, employees work on a school bus on the assembly line at Blue Bird Corporation's manufacturing facility, in Fort Valley, Ga. On Tuesday, March 1, 2016, the Institute for Supply Management, a trade group of purchasing managers, issues its index of manufacturing activity for February. (AP Photo/David Goldman)

WASHINGTON (AP) — May was a brutal month for the U.S. labor market, with job losses hitting multiple industries.

The Verizon workers' strike weighed on the telecommunications sector, which lost more than 37,000 jobs.

Overall, employers added just 38,000 jobs in May, the fewest in more than five years. The unemployment rate fell to 4.7 percent from 5 percent, mainly because nearly a half-million jobless Americans stopped looking for work and so were no longer counted as unemployed.