Steelworkers in Granite City, Illinois, threw a street party — complete with hot dogs, cold beer and a singer in red, white and blue — when U.S. Steel announced earlier this year it was bringing hundreds of laid-off employees back to work at the local mill. 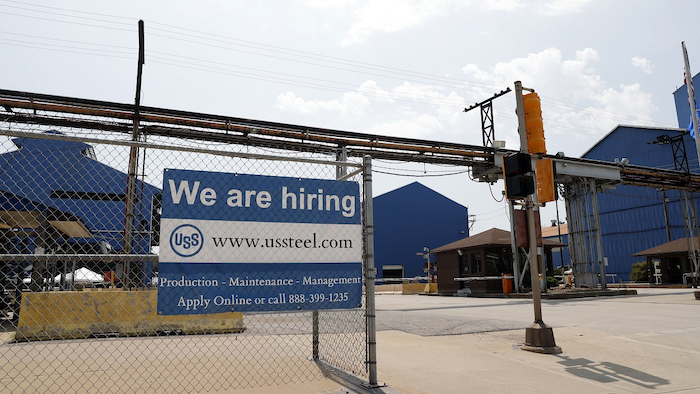 Steelworkers in Granite City, Illinois, threw a street party — complete with hot dogs, cold beer and a singer in red, white and blue — when U.S. Steel announced earlier this year it was bringing hundreds of laid-off employees back to work at the local mill.

U.S. Steel credited Trump's plan to impose tariffs on imported steel and aluminum when the company announced in March it was firing up a furnace at Granite City Works that had been idled for more than two years. Since then, Trump has pointed to the community east of St. Louis as an example of how his "America First" approach to trade will help U.S. workers — a case he'll make again Thursday before a crowd of employees and local residents who say this steel town has come alive again.

But not everyone is in a partying mood. Others in Illinois and the Midwest, from farmers to manufacturers and technology companies, warn a global trade war and retaliatory tariffs from countries such as China, Mexico and Canada are causing job losses. The new tariffs threaten more than $3.8 billion in Illinois exports, the U.S. Chamber of Commerce says, and major Illinois-based companies including Caterpillar and Boeing already have been negatively affected.

"While we're happy Granite City has those jobs coming back, it's a lot harder to see the jobs that are lost or not created in the rest of the state because of the tariffs," said Illinois Chamber of Commerce President Todd Maisch. He described the administration's policies as "really negative" for most of Illinois, the nation's fifth-largest economy. 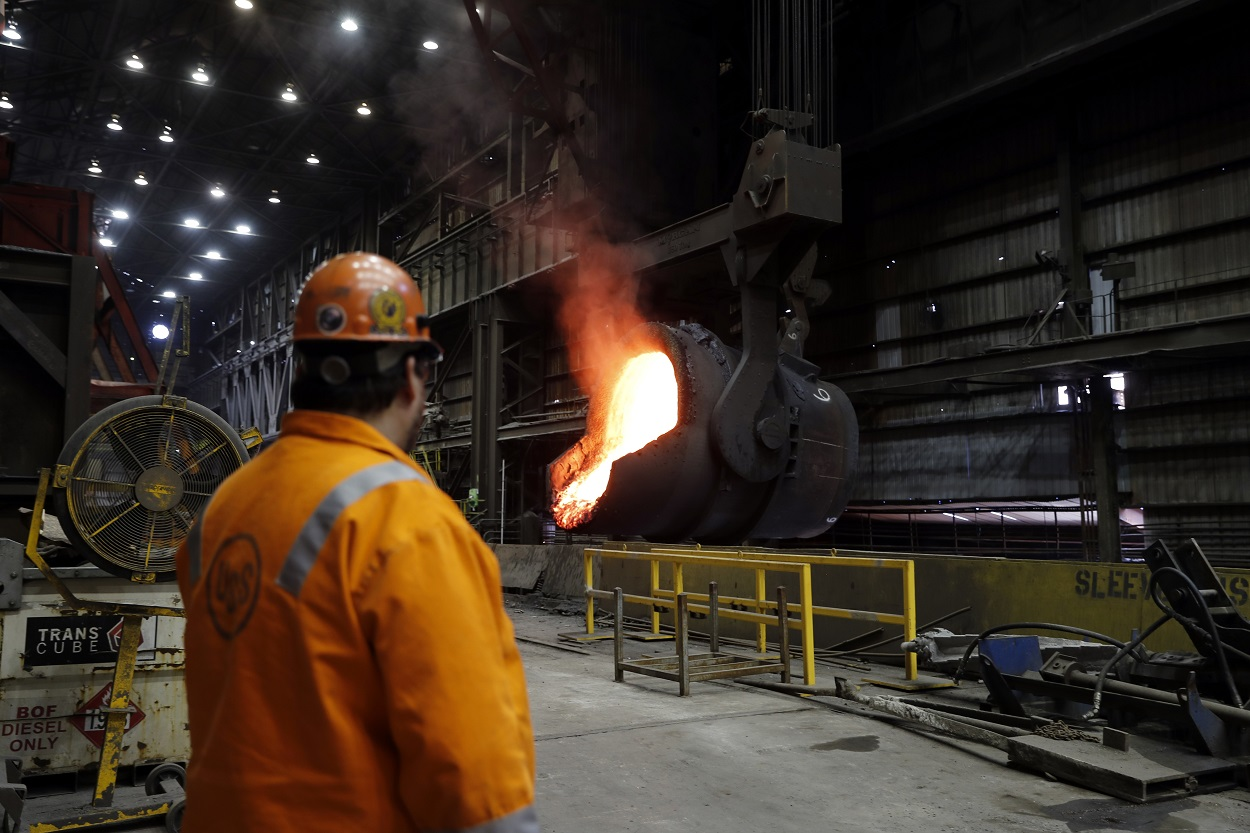 In this June 28, 2018 photo, senior melt operator Randy Feltmeyer watches a giant ladle as it backs away after pouring its contents of red-hot iron into a vessel in the basic oxygen furnace as part of the process of producing steel at the U.S. Steel Granite City Works facility in Granite City, Ill. Image credit: AP Photo/Jeff Roberson

Richard Guebert, a farmer and president of the Illinois Farm Bureau, said he told Vice President Mike Pence during a meeting last week that there's "a lot of angst" among farmers after several tough years and with another strong crop likely to lower prices this year. He worries particularly about whether young farmers will be able to keep going in a state where one of every four rows of soybeans is exported to China.

"Older, more seasoned farmers have a better asset base. They can weather storms like this," Guebert said. "The young farmers are having a definite challenge."

A $12 billion aid package the administration announced Tuesday to help farmers hurt by the trade disputes is "a start," Guebert said, but "won't make farmers whole in the face of continued trade tensions."

Factories around the region also have been hurt. Mid Continent Nail Corp. in Poplar Bluff, Missouri, has shuttered a multimillion-dollar plant and is "on the brink of extinction."

The company, which says it's the nation's largest nail manufacturer, employed 510 workers before Trump raised tariffs on June 1 but has since slashed its workforce to 370, spokesman James Glassman said. The tariffs led to a big jump in the price of steel wire, the raw material Mid Continent imports from Mexico to make nails. When Mid Continent raised its prices 25 percent, customers turned to cheaper foreign-made nails.

"This is a county that went 79 percent for Trump so people are certainly willing to give him the benefit of the doubt," Glassman said. "But their jobs are at stake because of this misguided tariff." 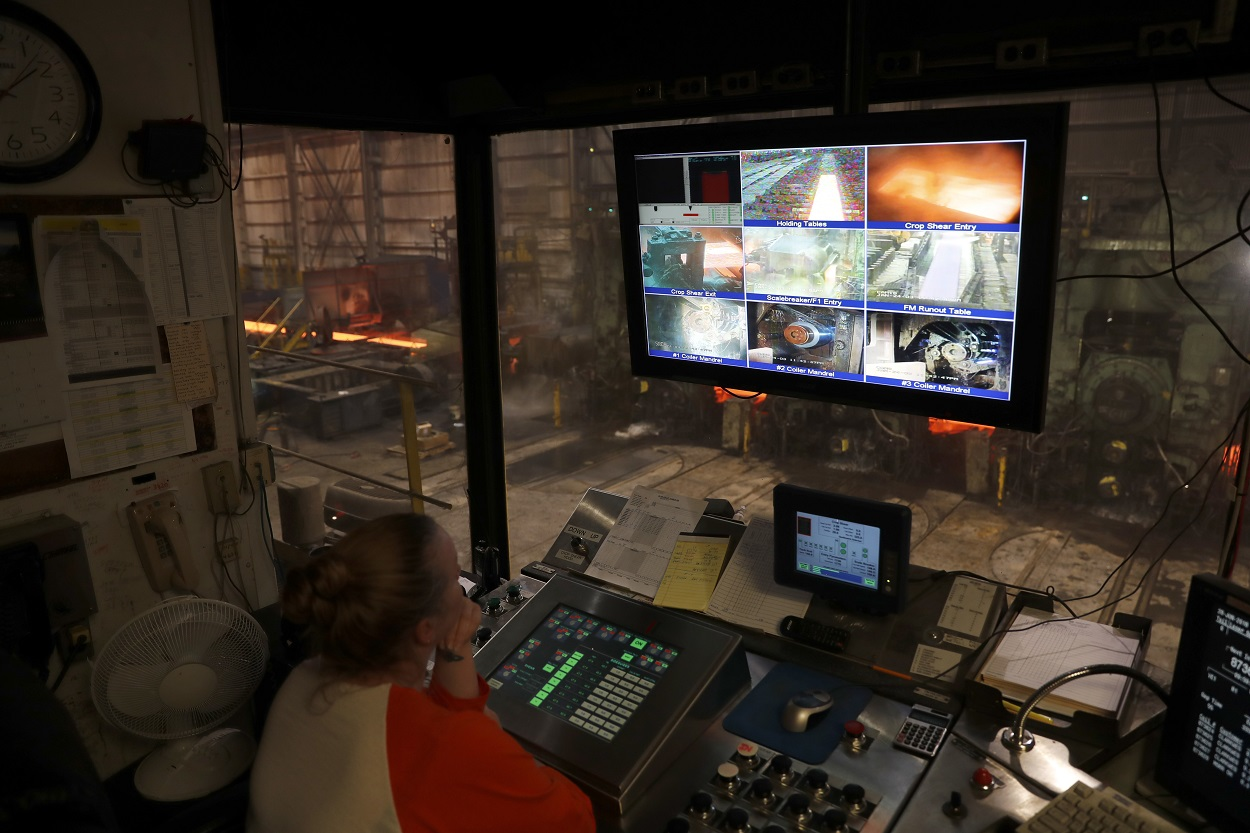 In this June 28, 2018 photo, steelworker Amanda Menendez keeps watch over various stages of the production process on monitors in an office as steel is produced on the floor below inside the hot-strip mill at the U.S. Steel Granite City Works facility in Granite City, Ill. Image credit: AP Photo/Jeff Roberson

Trump will travel to Granite City with Republican U.S. Rep. Mike Bost, whose southern Illinois district includes the steel mill as well as many farmers. The seat is one of Democrats' top targets as they look to regain control of the House this fall.

Bost, who's being challenged by St. Clair County State's Attorney Brendan Kelly, could get a boost from the Trump visit. While Illinois went heavily for Hillary Clinton in 2016 thanks to large support from the Chicago area, most of Southern Illinois backed Trump.

The more than 2,000 workers laid off from Granite City Works got the notice just before Thanksgiving 2015. U.S. Steel cited low oil prices — because the mill produces steel for oil refineries and the auto industry — as well as the availability of cheap, imported steel.

Granite City Works is now near its 2015 employment level of 2,100, with a second blast furnace to be operating by this fall. Jobs there mean dozens more at steel-processing plants throughout the city that bend or cut or coat or reshape the raw product, Amos said.