Milestone for US Job Market: More Openings Than Unemployed

For the first time on record, the number of job openings in the United States exceeds the number of unemployed Americans — a trend that may soon give workers more leverage for pay raises. 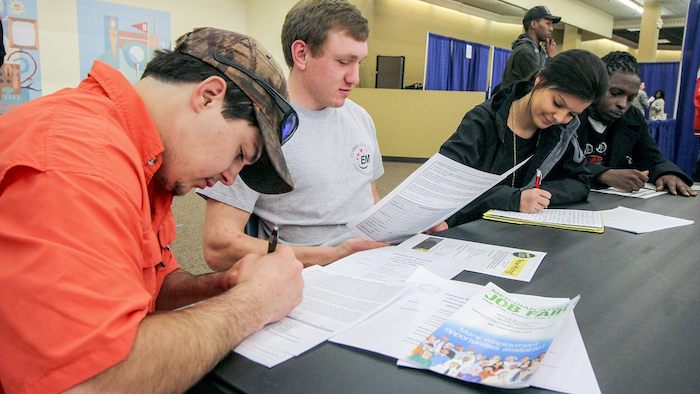 For the first time on record, the number of job openings in the United States exceeds the number of unemployed Americans — a trend that may soon give workers more leverage for pay raises.

The number of available jobs in April rose 1 percent to 6.7 million from 6.6 million in March, the Labor Department said Tuesday. That's the most since records began in December 2000.

Steady economic growth has encouraged employers to step up hiring. That helped lower the unemployment rate in May to an 18-year low of 3.8 percent. Faster consumer spending is expected to lift economic growth above a 3 percent annual pace in the April-June quarter, after growth had lagged slightly in the first three months of the year.

At the peak of the recession, there were, on average, 6.7 unemployed people for each job. Now, that figure has fallen to just 0.95 per opening.

That suggests employers may not be as desperate to hire as the robust number of job openings suggests.

For example, data from the Federal Reserve Bank of Atlanta indicate that workers who switch jobs are starting to get healthier pay gains. That is a sign that companies are willing to pay more to lure workers from other companies.

But by historical standards, pay increases for job-switchers are relatively low. In April, job-switchers saw their wages rise 4 percent, on average. But in December 2000, near the peak of the late 1990s boom, they were getting raises of 6.5 percent.

And Martha Gimbel, director of economic research at job listing site Indeed, points out that pay increases for Americans who remain in their jobs are actually falling. Wages for job-stayers were up just 2.9 percent in April, compared with 3.7 percent six months earlier.

Separate research from the Federal Reserve Bank of Kansas City, released last month, shows that 14.5 percent of people who remained in their jobs in early 2018 received no pay increase from a year earlier. That figure was just 11 percent before the Great Recession began in late 2007.

"That is really astonishing to me at this point in the recovery," Gimbel said. "That just signals that employers are not worried about their employees being poached."

The number of people quitting their jobs in April slipped just 1 percent from a record high in March to 3.4 million. More quitting is a positive sign, because it suggests workers are leaving jobs for new, possibly higher-paying, ones.

Job openings rose in professional and business services, which includes accountants, architects and engineers; manufacturing; and in hotels and restaurants.