MIT Launches Task Force on the Work of the Future

Today MIT launched its Task Force on the Work of the Future, an Institute-wide effort to understand and shape the evolution of jobs during an age of innovation. 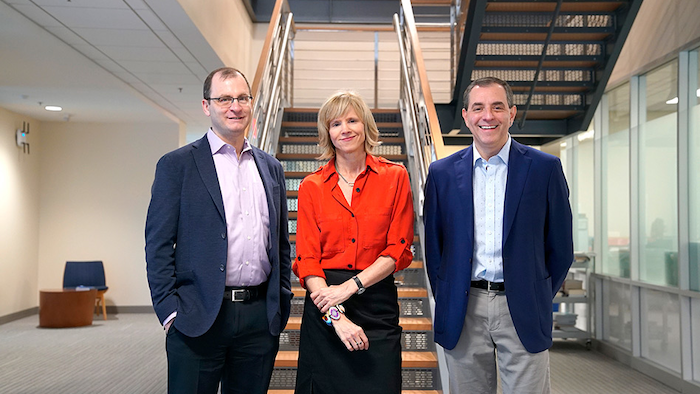 The task force leadership team consists of (right) David Autor, the Ford Professor of Economics and associate head of the MIT Department of Economics; (left) David Mindell, the Frances and David Dibner Professor of the History of Engineering and Manufacturing, and professor of aeronautics and astronautics; and (center) Elisabeth Reynolds, executive director of the MIT Industrial Performance Center (IPC) and a lecturer in the Department of Urban Studies and Planning. Image credit: Melanie Gonick/MIT

Today MIT launched its Task Force on the Work of the Future, an Institute-wide effort to understand and shape the evolution of jobs during an age of innovation.

The task force’s mission was announced in a letter to the MIT community by Provost Martin A. Schmidt.

“The MIT Task Force on the Work of the Future takes as a guiding premise that addressing the social and human implications of technology should not be an afterthought, but instead should be a first concern that pervades how we design, innovate, and take our ideas to market, as well as what we teach our students, the technologists of tomorrow,” Schmidt writes.

The task force’s project is a vital part of examining the strength of our civic fabric, MIT President L. Rafael Reif says.

“In profound and pervasive ways, the technologies humans invent in the present will set the terms of our shared future,” Reif says. “The global race to advance those technologies will help determine the nature of society itself. Through the work of the task force, we hope to help the nation and the world reflect on what kind of society we aspire to — and come together to make it real.”

Since at least the industrial revolution, new technologies have both created and replaced jobs at large scales, while altering many other forms of work. Today, new developments in artificial intelligence, automation, information technology, 3-D printing, and other areas of innovation are again reshaping traditional jobs and have the potential to further change the workplace.

Faced with this uncertain landscape, as well as growing concerns about the issue across the political spectrum, the MIT Task Force on the Work of the Future will conduct an empirical, interdisciplinary, and global study of the subject, to understand work today and its possible trajectories in the future. The task force aims to shed new light on the linked evolution of technology and human work, and will issue findings guiding the development and implementation of policy, to suggest how society can continue to offer broad opportunity and prosperity.

Many MIT scholars have already produced research revealing recent changes in the nature of work. The new initiative will bring that expertise to the fore and tap into the Institute’s unique range of scholarship.

The MIT Task Force on the Work of the Future consists of a faculty and student research team of more than 20 members, as well as an external advisory board. Additional researchers are expected to participate in working groups to supplement the efforts of the core task force members.

Those task force members represent fields from engineering and cognitive science to economics, management, political science, anthropology, education innovation, and the history of technology. The group will integrate deep knowledge of technology, expertise in the social and human sciences, and an understanding that public policy significantly shapes the workplace as well.

All told, the task force is expected to continue for two years. The group will issue research findings periodically, as well as final reports and a published book intended for a general audience. Task force activities will include conferences and a speaker series, in addition to educational and outreach efforts.

The task force leadership team consists of David Autor, the Ford Professor of Economics and associate head of the MIT Department of Economics; David Mindell, the Frances and David Dibner Professor of the History of Engineering and Manufacturing, and a professor of aeronautics and astronautics; and Elisabeth Reynolds, executive director of the MIT Industrial Performance Center (IPC) and a lecturer in the Department of Urban Studies and Planning.

“History makes clear that individuals and institutions shape how innovation, automation, and rising productivity translate into opportunity, meritocracy, and dynamism on the one hand, or into economic stasis, dynasticism, and plutocracy on the other,” says Autor, a labor economist who has studied many aspects of the workplace.

Autor adds: “MIT's choice of the title Work of the Future conveys two facets of the challenge and opportunity we face. One is to understand and anticipate the role that human work will play in a future in which machines accomplish many of our traditional cognitive and physical tasks. A second is to seize the opportunity to shape that future. Our task force aims to contribute to both goals — anticipating the future and enabling individuals, institutions, private-sector actors, and governments to make this future a better one.”

Mindell, an engineer, historian, and entrepreneur who has written multiple books about human-machine interactions, says he is “honored” to be co-chairing the task force. “I believe it is the most important thing MIT can be doing right now, as the world is clamoring for sober, informed assessments on how we can shape the future of technology and work. MIT’s resources on both the technical and social dimensions of these changes are unsurpassed, and I’m thrilled that the task force will bring together expertise from so many perspectives.”

Reynolds oversees the IPC, an interdisciplinary center supporting research about firms, industries, and technological change in the global economy. The new task force will engage with several issues that have been of longstanding interest to the IPC, such as the adoption of new technologies by firms, the role institutions play in shaping regional growth and labor markets, and the impact of increasing globalization on industry.

“We see significant variation in how different regions and countries more broadly are responding to concerns about the impact of new technologies on work in the future,” Reynolds says. “These differences are important to understand, within the U.S., as well as in other countries. We expect our research will try to capture this variation and learn from it.”

The launch of the MIT Task Force on the Work of the Future is occurring as the Institute is starting the MIT Intelligence Quest (MIT IQ), an interdisciplinary project to study and develop human and machine intelligence. The task force’s ability to draw upon the latest developments from MIT IQ will help it stay informed about the leading edge of intelligence research and its possible workplace applications. At the same time, research from the Work of the Future task force can inform the approach of MIT IQ and other Institute initiatives relevant to the workplace.

The MIT Task Force on the Work of the Future has a similar aim and structure as some high-profile MIT research initiatives that preceded it. MIT’s Production in the Innovation Economy (PIE) initiative, which concluded in 2013, examined the relationship between advanced manufacturing and innovation. Along with MIT’s participation in the U.S. federal government’s Advanced Manufacturing Partnership, the PIE initiative has helped inform U.S. economic policy on industrial innovation.