Is Trump Overstating The Depth Of The Labor Pool?

Envisioning a manufacturing revival, President Donald Trump tells lawmakers the U.S. has a vast, idle labor pool itching to go to work. But is that a mirage? 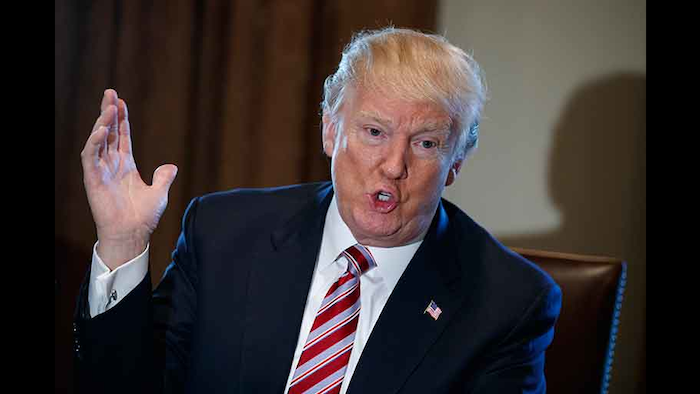 WASHINGTON  — As he envisions a manufacturing revival, President Donald Trump is telling lawmakers the U.S. has a vast, idle labor pool itching to go to work. That's a mirage.

His remarks Tuesday at a meeting with members of Congress about trade:

"I do have to say that we do have a pool of 100 million people, of which some of them — many of them — want to work; they want to have a job. A lot of them do better not working, frankly, under the laws. And people don't like to talk about it. But you're competing against government. And they have great potential. They sort of want to work, but they're making less if they work than if they stay home and do other things. So we have to address that situation. That's a big problem. But we have a pool of 100 million people, a lot of whom want to work. "

"Some of them" is true. But that's not true for most.

Out of Trump's pool of 100 million (actually 95.7 million, according to the government), only about 5.2 million say they want to be working. The vast majority is made up of students aged 16 and over, the elderly and people who want to stay home to raise their children. That information comes from the same government survey used to calculate the unemployment rate.

The economy is already considered to be close to full employment, meaning it's harder to find workers to fill new jobs — harder still if Trump succeeds in curbing immigration.

Few economists blame social programs keeping large numbers of people at home and out of work, as Trump appeared to do. Instead, recent economic research suggests opioid addiction is a key reason many Americans can't get or keep jobs. And past episodes of widespread imprisonment are also a factor: Having a criminal conviction makes it hard for people to find work once they are out of jail.

Trump reasons that trade penalties he's considering against other countries would spur domestic manufacturing if imports become too expensive. But Republican Sen. Ron Johnson of Wisconsin and other lawmakers told him to tread carefully on trade sanctions because the tight U.S. labor market has existing manufacturers struggling to fill jobs.