Hurricanes Cause Rare Monthly US Job Loss But Rebound Likely 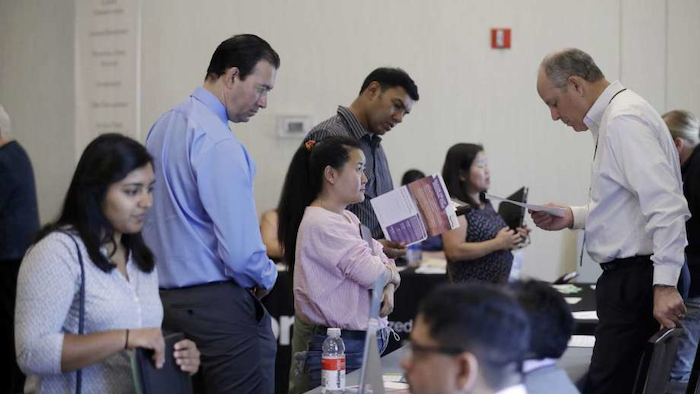 The U.S. shed 33,000 jobs in September because of Hurricanes Harvey and Irma, which closed thousands of businesses in Texas and Florida and forced widespread evacuations. It marked the first monthly hiring drop in nearly seven years.

The unemployment rate fell to 4.2 percent from 4.4 percent, the Labor Department said Friday , the lowest level since 2001 and a sign that the job market remains fundamentally solid. Hiring is expected to rebound in coming months as businesses in the Southeast reopen and bring back employees, and construction companies ramp up repair and renovation work.

"The labor market remains in good shape," said Gus Faucher, chief economist at PNC Financial. "The job losses were due to disruptions from hurricanes, not underlying weakness in the economy."

Last month's drop was driven by huge losses in restaurants and bars, which accounted for 105,000 fewer jobs, a sign of the damage to Florida's tourism industry. Roughly 1.5 million people were unable to work last month because of the weather, the government said, the most in 20 years.

Outside of hurricane-hit areas, many Americans found work. The number of people describing themselves as unemployed fell to 6.8 million, the fewest since March 2007, before the Great Recession began.

That sign of health makes it appear all but certain that the Federal Reserve will raise its benchmark short-term interest rate in December. According to data from the CME Group, investors now foresee a 93 percent chance of a Fed rate hike then.

Fed Chair Janet Yellen has said she expects pay raises to accelerate as unemployment declines. That, in turn, might lift inflation closer to the Fed's annual 2 percent target level if companies raised prices to pay for higher salaries.

Hourly workers who couldn't work because of the storms last month and missed a paycheck would have been counted as not working in the government's survey of businesses, thereby lowering September's job total. That's true even if those employees returned to work after the storm passed or will return.

The unemployment rate fell because it is calculated with a separate survey of households. That survey counted people as employed even if they were temporarily out of work because of the storms. In fact, the proportion of adults who have jobs rose to 60.4 percent, the highest since January 2009.

That's a positive sign that the low unemployment rate is pulling more Americans off the sidelines and back into the job market. Many people gave up searching for work during the recession and the slow recovery that followed.

Dan Harmon, chief operating officer of Smoothie King, a 900-store chain based near New Orleans, said the storms temporarily closed 66 stores in the Houston area and disrupted the company's end-of-summer hiring. One store was so damaged it still hasn't reopened.

In August and September, the company typically hires new employees to replace college workers who return to school. But that process was delayed in Florida and Texas.

"We weren't able to do our normal hiring spree that we usually do going into the fall," Harmon said.

The storms also disrupted the company's expansion plans. It opened 65 stores nationwide in the July-September quarter. It would have opened four more, but they were damaged while under construction. Each Smoothie King employs about 15 hourly workers and two to three managers.

Nationwide, an alternative barometer of the labor force that includes not only the unemployed but also part-time workers who'd prefer full-time jobs, fell to 8.3 percent. That's the lowest such level in over a decade.

Average hourly wages rose a healthy 2.9 percent from 12 months earlier. That trend was probably inflated by the loss of so many lower-paid workers in hurricane-hit areas. Higher-paid workers likely disproportionately boosted the wage figure.

Still, the government on Friday revised wage gains in August — before the hurricanes hit — to a 2.7 percent annual rate, up from 2.5 percent. That suggests that pay could be picking up, even excluding the storms, and encouraging more people to look for work.

More than 11 million people had been employed in the 87 counties in Texas and Florida that were declared disaster areas, the government says. That's equal to about 7.7 percent of the nation's workforce.

Puerto Rico and the U.S. Virgin Islands, which were hammered by Hurricane Maria, aren't included in the national unemployment report. Their data will be included in the state jobs data to be released Oct. 20.

Other recent indicators point to a solid economy and job market. This week, a survey of services firms — covering restaurants, construction companies, retail stores, banks and others — found that they expanded in September at their fastest monthly pace since 2005. That followed a survey of manufacturers, which found an equally strong gain. Factory activity expanded at the fastest pace in more than 13 years.

Harvey caused about $76 billion to $87 billion in economic losses, according to Moody's Analytics, an economic consulting firm. The estimate includes damage to homes and businesses as well as lost business and economic output. That calculation would make Harvey the second-worst U.S. natural disaster, after Hurricane Katrina in 2005.

Irma will likely end up having caused $58 billion to $83 billion in economic losses, Moody's forecasts.