Recent revelations of a scheme involving the United Auto Workers could threaten its years-long attempts to unionize an auto plant in the southern U.S. 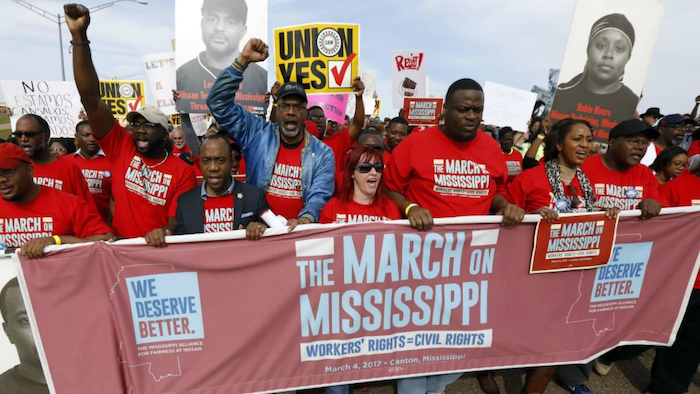 Recent revelations of a scheme involving the United Auto Workers could threaten its years-long attempts to unionize an auto plant in the southern U.S.

The Detroit News reports that Nissan highlighted articles and made presentations to workers at its Canton, Miss., plant about last week's indictments of Monica Morgan-Holiefield and Alphons Iacobelli.

Workers at the central Mississippi factory will vote Thursday and Friday about whether to form a UAW chapter at the facility. If approved, the Canton plant would become the first with a UAW chapter for hourly workers in the South, where many foreign automakers set up shop amid traditionally low unionization rates and long-standing laws that prohibit mandatory union membership.

Morgan-Holiefield, the wife of the late UAW Vice President General Holiefield, and Iacobelli, the vice president for employee relations for Fiat Chrysler, were charged in connection with a multi-year scheme to divert millions in funds linked to a UAW-Chrysler worker training facility.

Morgan-Holiefield allegedly used the money to pay off a mortgage and purchase first-class airline tickets; Iacobelli's purchases reportedly included a new swimming pool and kitchen as well as a $350,000 Ferrari.

UAW President Dennis Williams sought to assure members that union leadership was not aware of the plan and was "heartbroken and horrified" by the incident, one of "the toughest moments our union has faced in years."

Another UAW official told the News that the scandal was an "isolated incident" and downplayed its potential impact on the unionization vote.

"Nissan is trying desperately to make hay over this as part of their scorched-earth anti-union campaign, but we don’t believe it’s getting traction among employees," Secretary-Treasurer Gary Casteel told the paper.

Nissan, meanwhile, said that workers deserved to hear all sides in the bitter fight over unionization.

"The company has the right, and we believe the obligation, to provide employees with full information as they prepare to make this important decision, and we will continue to do so," the company told the paper in a statement.