"No one who works hard in a full-time job should have to live in poverty," Sen. Patty Murray said. "We owe it to workers across the country to make sure our minimum wage is set to a level that works for them and their families." 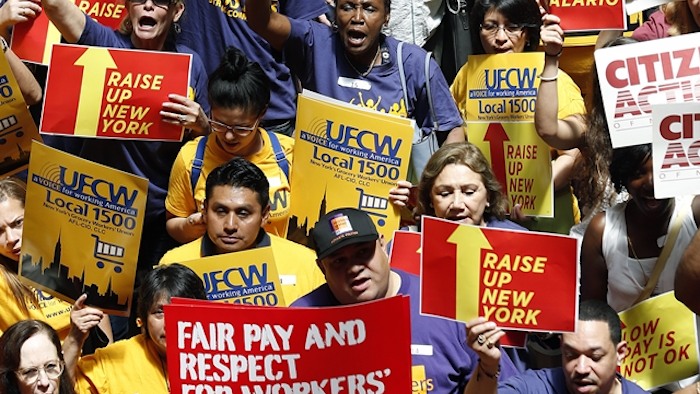 Sen. Patty Murray of Washington and Rep. Bobby Scott of Virginia on Thursday introduced the Raise the Wage Act, which would bump the wage from the current $7.25 per hour to $12 per hour by 2020.

The proposal would also index that threshold to the median wage in future years and eliminate an exemption for tipped workers.

"No one who works hard in a full-time job should have to live in poverty," Murray said. "We owe it to workers across the country to make sure our minimum wage is set to a level that works for them and their families."

As previous bills languished in Congress, however, many states and cities took the initiative to enact higher wage floors for their citizens. Critics pointed to Seattle, which implemented a $15 minimum wage last month — one of the highest among large cities in the nation.

"If Senator Murray wants to know why a $12 minimum wage is bad policy, she should look in her own backyard," wrote Michael Saltsman of the Employment Policies Institute, a D.C.-based nonprofit with ties to the restaurant industry.

A group called Business for a Fair Minimum Wage countered that enacting the Murray-Scott bill would "be good for business, customers and our economy.”

"Today’s outdated minimum wage has far less buying power than it had in the 1960s, dragging down the consumer demand that drives Main Street businesses," said CEO Holly Sklar.

The ongoing political fight over wage levels coincides with a number of high-profile retailers that decided to raise pay rates for low-wage workers — a sign, analysts said, of a tightening U.S. labor market.

The company will construct a 650,000-square-foot facility in Virginia.
Apr 22nd, 2021
Follow Us
Most Recent