Bradley J. Holcomb, CPSM, CPSD, chair of the ISM Business Survey Committee, says the report is fairly well balanced, yet growth is slower in both imports and exports. 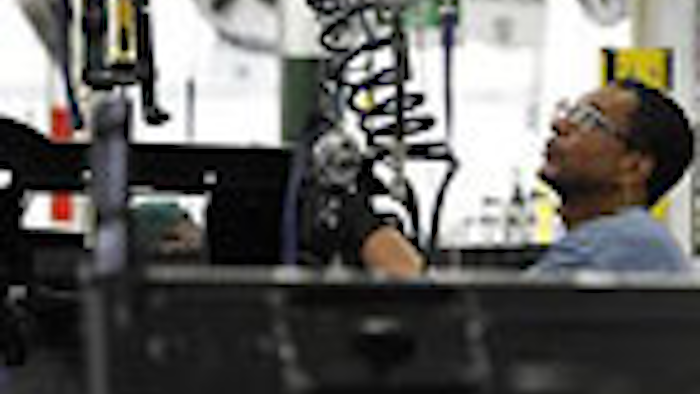 Manufacturing expanded in July as the PMI registered 57.1 percent, an increase of 1.8 percentage points when compared to June’s reading of 55.3 percent. July’s PMI reading of 57.1 is the highest reading since April 2011 when the PMI registered 58.9 percent. A reading above 50 percent indicates that the manufacturing economy is generally expanding; below 50 percent indicates that it is generally contracting.

“This month is a pretty strong number at 57.1, up 1.8 percentage points,” says Bradley J. Holcomb, CPSM, CPSD, chair of the ISM Business Survey Committee. “It’s the highest reading since April of 2011, and we have 17 of our 18 industries reporting growth, so it’s very broad based.”

ISM’s New Orders Index registered 63.4 percent in July, an increase of 4.5 percentage points when compared to the 58.9 percent reported in June, indicating growth in new orders for the 14th consecutive month. A New Orders Index above 52.1 percent, over time, is generally consistent with an increase in the Census Bureau’s series on manufacturing orders (in constant 2000 dollars).

ISM’s Production Index registered 61.2 percent in July, which is an increase of 1.2 percentage points when compared to the 60 percent reported in June, indicating growth in production for the fifth consecutive month. An index above 51.1 percent, over time, is generally consistent with an increase in the Federal Reserve Board’s Industrial Production figures.

“New orders is really the engine that drives this whole system, and up 4.5 percentage points to 63.4 is a really solid number, indicating good orders and 13 of our industries reporting growth and only two reporting a decrease and those are not some of our larger industries,” says Holcomb. “So again, broad based, really solid number. Production as well is up 1.2 percentage points, keeping up with those new orders and also keeping the backlog of orders at a reasonable rate.”

“Down 4.5 percentage points, dropping below 50 to 48.5 is a natural consequence of high production, number one,” says Holcomb. “And number two, supplier deliveries being slower and faster in terms of the slowing aspect. It’s a little hard to get your head around, but when we have slow supplier deliveries, that will generally mean inventories of raw materials are low, and in this particular environment that’s a good thing, because supplier deliveries being tight represents tightness and strong demand up and down the supply chain. So the bottom line is inventories are below 50 but still well controlled and we will likely see them go back up next month.”

ISM’s New Export Orders Index registered 53 percent in July, which is 1.5 percentage points lower than the 54.5 percent reported in June. July’s reading reflects growth in the level of exports for the 20th consecutive month.

ISM’s Imports Index registered 52 percent in July, which is 5 percentage points lower than the 57 percent reported in June. This month’s reading represents 18 consecutive months of growth in imports.

“Exports at 53 and imports at 52 show growth for the 20th consecutive month with exports and 18th consecutive month with imports, says Holcomb. “But they’re both down in terms of a slower growth rate than last month. The only one that catches my eye is imports down 5 percent. That’s a big drop, and it’s just something to watch. We can’t speculate as to why that would be – whether it would be in part due to geopolitical situations around the world – we just don’t know. But we’ll keep an eye on it.”

“The most recent jobs report confirms the bright outlook, showing that 28,000 manufacturing jobs were created in July—well above the 15,000 jobs per month average of the last 12 months,” says Dan Meckstroth, Chief Economist at MAPI. “Manufacturing activity is driven by consumer demand for durable goods and housing, expanding energy infrastructure, and firming business confidence in the future of U.S. manufacturing. The manufacturing infrastructure decline appears to have stabilized and firms are now expanding investments in structures and factory equipment.

Holcomb says that overall we saw a solid continuation of a trend that’s been set up and has been continuing all year, this being the high-point for the year. He says we are situated well for continuation of this trend, barring some difficult situations around the world.

“I think everything looks very solid and well balanced, particularly new orders, which as I said really drives this whole system. But if you go into the quotes, you can see that they are generally positive but they’re not super optimistic, if you will. And there’s a couple that refer to geopolitical situations representing a risk, and one says Russia’s demand for medical devices from the U.S. has dropped 40 percent, so there’s an actual impact cited by one of our companies. I think it goes without saying that we all are watching these various troubled spots around the world and hoping that things settle down.”