Angry customers and gangs of scalpers threw eggs at Apple Inc.'s Beijing store Friday after the iPhone 4S launch there was canceled due to concerns over the crowd's size. 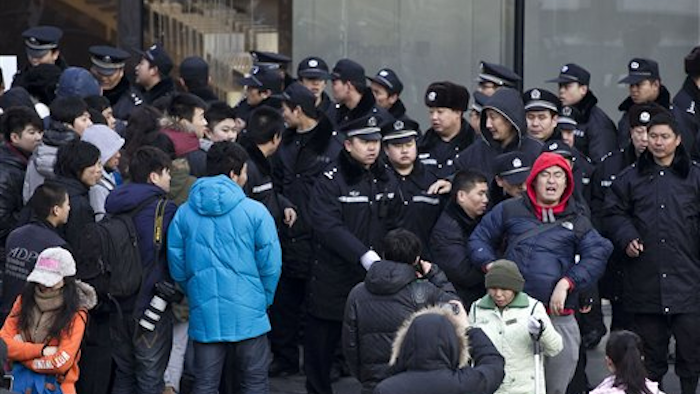 BEIJING (AP) — Angry customers and gangs of scalpers threw eggs at Apple Inc.'s Beijing store Friday after the iPhone 4S launch there was canceled due to concerns over the crowd's size.

Apple reacted to the outburst by postponing iPhone 4S sales in its mainland China stores to protect customers and employees. The phone still will be sold online and through its local carrier.

The incident highlighted Apple's huge popularity in China and the role of middlemen who buy up limited supplies of iPhones and other products or smuggle them from abroad for resale to Chinese gadget fans at a big markup.

Hundreds of customers including migrant workers hired by scalpers in teams of 20 to 30 waited overnight in freezing weather at the Apple store in a shopping mall in Beijing's east side Sanlitun district.

The crowd erupted after the store failed to open on schedule at 7 a.m. Some threw eggs and shouted at employees through the windows.

A person with a megaphone announced the sale was canceled. Police ordered the crowd to leave and sealed off the area with yellow tape. Employees posted a sign saying the iPhone 4S was out of stock.

"We were unable to open our store at Sanlitun due to the large crowd, and to ensure the safety of our customers and employees, iPhone will not be available in our retail stores in Beijing and Shanghai for the time being," said Apple spokeswoman Carolyn Wu.

The iPhone 4S quickly sold out at other Apple stores in China, Wu said. She said the phone still will be sold in China through Apple's online store, its local carrier China Unicom Ltd. and authorized resellers.

China is Apple's fastest-growing market and "an area of enormous opportunity," CEO Tim Cook said in October. He said quarterly sales were up nearly four times over a year earlier and accounted for one-sixth of Apple's global sales.

Apple's China stores are routinely mobbed for the release of new products.

The company has its own stores only in Beijing and Shanghai, with a handful of authorized retailers in other cities, so middlemen who buy iPhones and resell them in other areas can make big profits, said Wang Ying, who follows the mobile phone market for Analysys International, a research firm in Beijing.

"Apple is making a lot of money, so it is not too concerned about the scalpers," Wang said.

Wang and other industry analysts said the size of the underground trade and price markups are unclear.

In Shanghai, stores limited iPhone 4S sales to two per customer. Several hundred people were waiting when the stores opened, bundled up against the cold. Some passed the time playing mahjong.

Buyers included 500 older people from neighboring Jiangsu province who were hired by the boss of a mobile phone market, the newspaper Oriental Morning Post said. They arrived aboard an 11-bus convoy and were paid 150 yuan ($15) each.

Online bulletin boards were filled with comments about Friday's buying frenzy, many complaining about or ridiculing the scalpers.

An Apple contractor manufactures iPhones in China, but new models are released in other countries first. That has fueled a thriving "gray market" in China for phones smuggled in from Hong Kong and other markets.

Last May, the Sanlitun store was closed for several hours after a scuffle between an employee and a customer during the release of the iPhone 4, the previous model in the series.

Customers began gathering Thursday afternoon outside the Sanlitun store. People in the crowd said the number grew to as many as 2,000 overnight but many left when word spread the store would not open. About 350 people remained when the protest erupted after 7 a.m.

"On the one hand there is poor organization and on the other there were just too many people," said a man outside the Sanlitun store Friday, who would give only his surname, Miao. "I don't think they prepared well enough."

Another man who refused to give his name said he was a migrant laborer who was paid 100 yuan ($15) to wait in line overnight.

Others in the crowd said scalpers had organized groups of 20 to 30 migrant workers to buy phones or hold places in line. Organizers held colored balloons aloft to identify themselves to their workers.

Others said they were waiting to buy the phone for themselves.

"I just like the 4S," said Zhu Xiaodong, a Beijing resident. He said he was upgrading from the previous iPhone 4 model.

Sales in China began three months after the iPhone 4S had its global debut Oct. 14 in the United States and six other countries.

The delay between the release of Apple products in the United States and in China has yet to affect its reputation with Chinese customers, said Ted Dean, managing director of BDA China Ltd., a research firm in Beijing.

For other products, such a delay "sort of gives the impression here that you're not giving the Chinese consumer a fair shake," Dean said. "But demand and that 'cool factor' is so huge for Apple products that you don't hear that about them."