A group of prominent Chinese writers have demanded millions of dollars in compensation from technology giant Apple Inc. for allegedly selling unlicensed versions of their books in its online store. 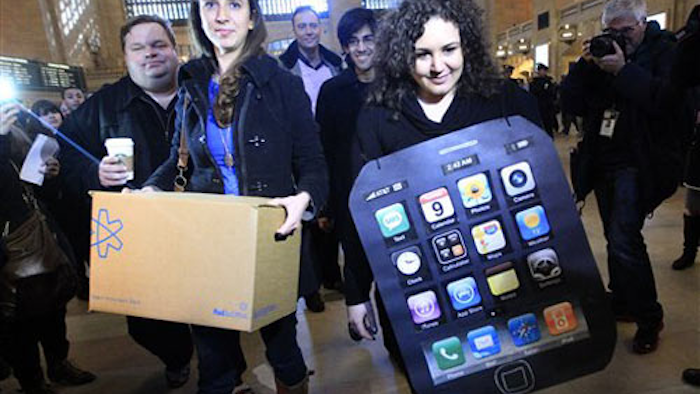 BEIJING (AP) — A group of prominent Chinese writers have demanded millions of dollars in compensation from technology giant Apple Inc. for allegedly selling unlicensed versions of their books in its online store, a lawyer said Monday.

The case is a departure from the usual pattern of U.S artists or companies going after Chinese copycats. Trade groups say illegal Chinese copying of music, designer clothing and other goods costs legitimate producers billions of dollars a year in lost sales.

Three separate lawsuits have been filed with the Beijing No. 2 Intermediate Court on behalf of 12 writers who allege 59 of their titles were sold unlicensed through Apple's iTunes online store, said Wang Guohua, a Beijing lawyer representing the writers.

The three suits together demand 23 million (US$3.5 million) in compensation from Apple, Wang said. Well-known novelist and race car driver Han Han is among the writers taking the legal action, he said.

"As an IP holder ourselves, we understand the importance of protecting intellectual property and when we receive complaints we respond promptly and appropriately," she said. She declined to get into the specifics of the Chinese writers' claims.

Wang said the Chinese writers' works was made available via the Apple Store without their permission, violating their copyright, and while Apple deleted some books after the suits were filed in January, some works quickly appeared again, apparently uploaded by developers that sell apps through the Apple Store.

"Some developers, with whom Apple has contracts, put them back online again," said Wang of the United Zhongwen Law Firm. "It is encouragement in disguise, because they did not punish the developers. The developers could have been kicked out. But nothing happened to them."

Apple has more than 585,000 apps available through its Apple Store, and according to guidelines postedonline, requires the developers themselves secure the rights to any trademarked material within those apps.

Wang said 10 other writers have also gotten involved since January but their suits have yet to be filed. In all, 23 writers have registered their complaints with Wang and claim that Apple sold 95 pirated titles.

The official Xinhua News Agency reported late Sunday that the writers were collectively seeking 50 million yuan ($7.7 million) in compensation from Apple but Wang could not confirm that figure.

Product piracy is a major irritant in China-US relations, but usually involves complaints that Chinese are copying American products.

However, it's not the first time Chinese have cried foul over copyright infringement by an American company either. In 2009, the government-affiliated China Written Works Copyright Society complained that Google had scanned nearly 20,000 works by 570 Chinese authors without permission as part of its digital library project, drawing an apology from Google.

For Apple, the latest case is just one of several legal battles being fought in China. The company is embroiled in a battle over the iPad trademark with Proview Electronics Co., a Chinese computer monitor and LED light maker that says it registered the trademark more than a decade ago.

Proview wants Apple to stop selling or making the popular tablet computers under that name.

Apple says Proview sold it worldwide rights to the iPad trademark in 2009, though in China the registration was never transferred.