Microsoft is scrambling to preserve what's left of its kingdom, and it's counting on Windows 8 to do it. 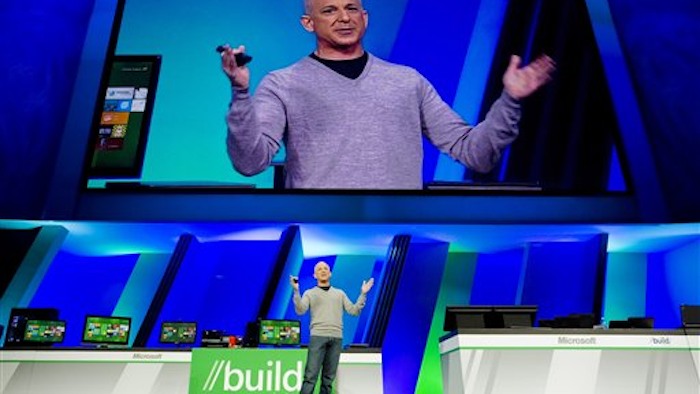 SAN FRANCISCO (AP) — Microsoft is scrambling to preserve what's left of its kingdom.

Since the company released its Windows operating system in 1985, most of the sequels have been variations on the same theme. Not that it mattered much. Regardless of the software's quality, Microsoft managed to remain at the center of the personal computing universe.

The stakes are much different as Microsoft Corp. puts the finishing touches on Windows 8 — perhaps the most important piece of software the Redmond, Wash., company has designed since co-founder Bill Gates won the contract to build the first operating system for IBM Corp.'s personal computer in the early 1980s.

A test, or "beta," version of the revamped operating system will be unveiled Wednesday in Barcelona, nudging Windows 8 a step closer to its anticipated mass market release in September or October. The company will offer the most extensive look at Windows 8's progress since it released an early version of the system to developers five months ago.

Microsoft designed Windows 8 to help it perform a difficult balancing act. The company hopes to keep milking revenue from a PC market that appears to be past its prime, while trying to gain a stronger foothold in the more fertile field of mobile devices. It's a booming market that, so far, has been defined and dominated by Apple Inc.'s trend-setting iPhone and iPad and Google Inc.'s ubiquitous Android software.

"Microsoft's future path is riding on Windows 8 and its success," said Gartner Inc. analyst David Cearley. "This is a chance for Microsoft to re-establish itself in a market where it's becoming increasingly irrelevant."

If Windows 8 is a hit, it could also help lift the fortunes of struggling PC makers, including Hewlett-Packard Co. and Dell Inc. Besides giving businesses and consumers a reason to consider new PC purchases, Windows 8 is expected to spawn a new breed of hybrid machines that will be part tablet computer, part laptop.

If Windows 8 is a flop, however, it will increase the pressure on Microsoft CEO Steve Ballmer. His 12-year reign has been marred by the company's troubles adapting to an Internet-driven upheaval. As Microsoft has stumbled, faster-innovating companies such as Apple and Google have elbowed their way into a position to steer the direction of computing for the next decade or two.

Ballmer, known for his zealous faith in Microsoft, hails Windows 8 as the catalyst for an exciting — and lucrative — new era at the 37-year-old software maker.

Investors seem to be believers, too. Microsoft's stock gained 52 cents Tuesday to close at $31.87, the highest closing price since April 2008. The shares have climbed by 23 percent so far this year. By comparison, Apple's stock has surged 32 percent during the same period, while Google's shares have dropped 4 percent.

Microsoft's financial performance traditionally improves when it releases a new version of Windows. The last upgrade came in October 2009 when Windows 7 hit the market. The company has sold more than 525 million copies of Windows 7 since then. Part of Window 7's success stemmed from pent-up demand; the previous version, Vista, was so clunky and buggy that many PC users stuck with the system they already had on their machines or switched to Apple's technology on Mac computers.

Windows 8 is radically different from its predecessors. The system won't even have Microsoft's familiar "Start" menu. All applications are spread across a mosaic of tiles, as part of a design Microsoft calls "Metro." The tiles, which resemble road signs, can be navigated with a swipe of the finger on the display screen or with a keyboard and a computer mouse. The tiles also provide a glimpse at the activity occurring in applications connected to the Web, such as email.

The system also is expected to enable users to easily back up their pictures, movies, music and other files on a Microsoft storage service called SkyDrive, which will compete against Apple's iCloud.

The operating system's versatility means it can be used to power computer tablets, as well as traditional PCs.

Microsoft badly wants a piece of the tablet market that has been cutting into PC sales since Apple introduced the iPad two years ago.

In the quarter that included the holiday shopping season, Apple shipped 15.4 million iPads, more than doubling the volume from the same time a year earlier. Meanwhile, worldwide personal computer sales dipped slightly, and Microsoft's revenue in its Windows division declined 6 percent. It marked the fourth time in the past five quarters that Microsoft's Windows revenue has fallen from the previous year.

Reversing or slowing that trend is critical for Microsoft. It still relies on the PC industry for about 55 percent of its revenue, according to Nomura Equity Research analyst Rick Sherlund. "The launch of Windows 8 should provide a few years of robust growth and opportunity for Microsoft to reposition itself to better defend its position against challengers," Sherlund wrote in a note after Microsoft reported the latest erosion in its Windows division.

Besides spurring more sales of the new operating system, Windows 8 is likely to drive demand for the next generation of the Office suite, another major moneymaker for Microsoft.

Windows 8 could inspire more PC makers to design machines that combine the convenience of tablets with the utility of a notebook computer. These devices would be similar to the so-called "ultrabook" computers that offer a Windows-based version of Apple's lightweight MacBook Air machines. Once Windows 8 is available, the ultrabook line could be expanded to include machines equipped with a screen that swivels off the keyboard to take advantage of the system's touch controls and provide a tablet-like experience.

Microsoft clearly envisions Windows 8 becoming the foundation for pure tablets, too. That's why it's developing a version of Windows 8 that can run on the more tablet-friendly microprocessor technology licensed by ARM Holdings. That version will complement the Windows 8 design that will run on the Intel Corp. and Advanced Micro Devices Inc. chips that power most PCs.

HP, the world's largest PC maker, is already counting on Windows 8 to deliver better times. The company's division that includes desktop and laptop computers suffered a 15 percent drop in revenue during its more recent quarter ending in January. CEO Meg Whitman said last week that HP expects to release PCs and tablets running on Windows 8 in time for the holiday shopping season. HP's Windows 8 product line will include a tablet designed for corporate customers.

The biggest question hanging over Windows 8 is whether the long wait for the software will leave Microsoft hopelessly behind Apple and Google in mobile computing.

Whatever headlines Microsoft grabs during Wednesday's preview are likely to be quickly overshadowed next week when Apple is expected to show off the third version of the iPad.

Meanwhile, Google says more than 300 million smartphones and tablets are already running on its Android software, with another 850,000 devices getting activated each day. At that rate, another 155 million to 180 million devices could be running on Android by the time Windows 8 comes out in September or October. As it is, a version of Android is already running the second hottest-selling tablet, Amazon.com Inc.'s Kindle Fire.

"Microsoft is late to the game and this is a different game than they have been playing," Cearley said. "But if they hit a home run with Windows 8, it could still turn some things around."