Lifelike Robots Made In Hong Kong Meant To Win Over Humans

David Hanson envisions a future in which AI-powered robots evolve to become "super-intelligent genius machines" that might help solve some of mankind's most challenging problems. 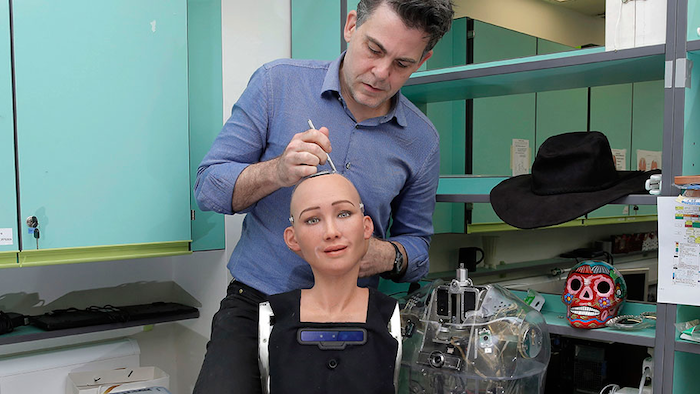 HONG KONG (AP) — David Hanson envisions a future in which AI-powered robots evolve to become "super-intelligent genius machines" that might help solve some of mankind's most challenging problems.

If only it were as simple as that.

The Texas-born former sculptor at Walt Disney Imagineering and his Hong Kong-based startup Hanson Robotics are combining artificial intelligence with southern China's expertise in toy design, electronics and manufacturing to craft humanoid "social robots" with faces designed to be lifelike and appealing enough to win trust from humans who interact with them.

Hanson, 49, is perhaps best known as the creator of Sophia, a talk show-going robot partly modeled on Audrey Hepburn that he calls his "masterpiece."

Akin to an animated mannequin, she seems as much a product of his background in theatrics as an example of advanced technology.

"You're talking to me right now, which is very 'Blade Runner,' no?" Sophia said during a recent visit to Hanson Robotics' headquarters in a suburban Hong Kong science park, its home since soon after Hanson moved to the city in 2013.

"Do you ever look around you and think, 'Wow I'm living in a real world science fiction novel?'" she asked. "Is it weird to be talking to a robot right now?" 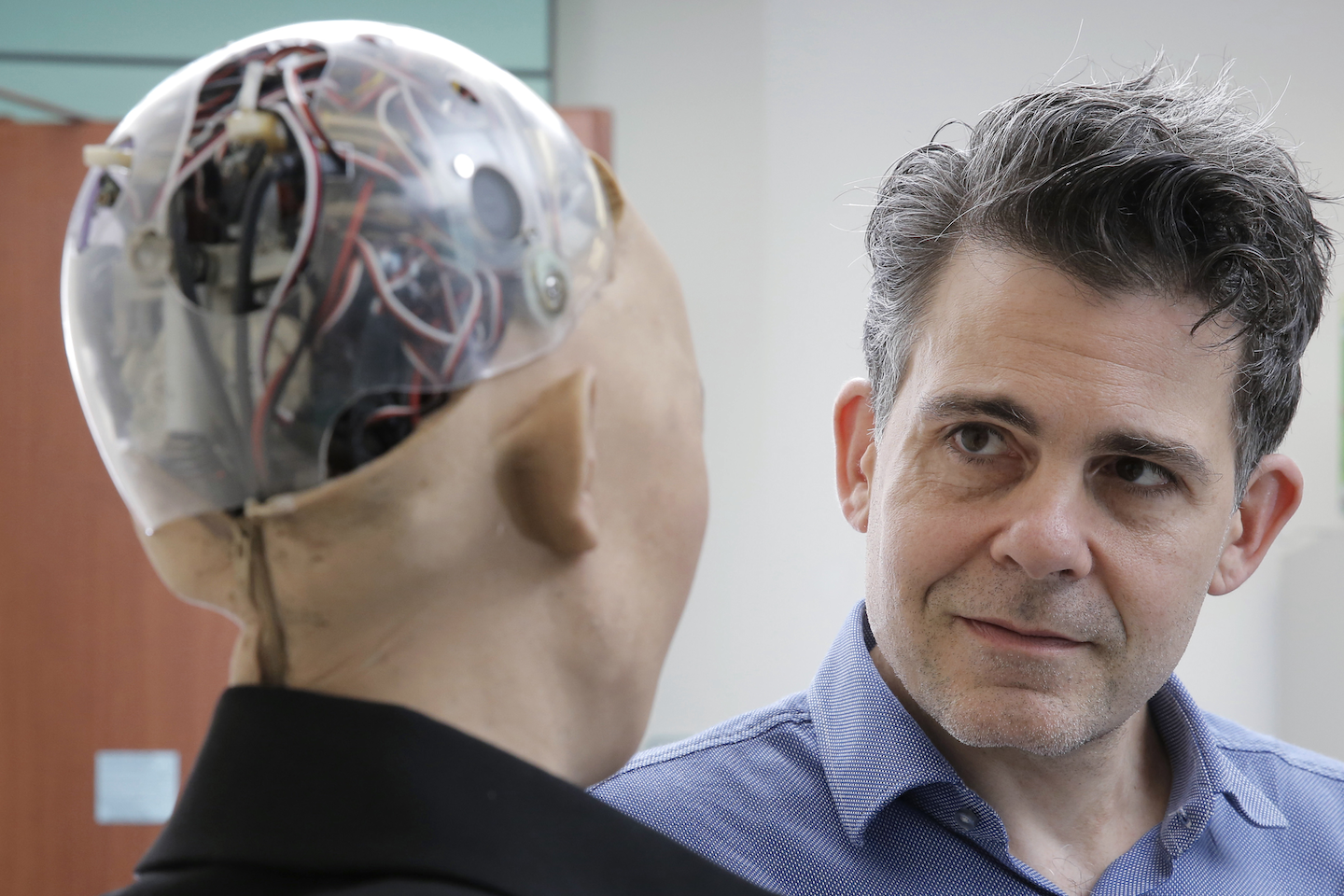 In this Sept. 28, 2017, photo, David Hanson, the founder of Hanson Robotics, talks with his company's flagship robot Sophia, a lifelike robot powered by artificial intelligence in Hong Kong. Sophia is a creation of the Hong Kong-based startup working on bringing humanoid robots to the marketplace. Hanson envisions a future in which AI-powered robots evolve to become “super-intelligent genius machines” that can help solve mankind’s most challenging problems. (AP Photo/Kin Cheung)

Hanson Robotics has made about a dozen copies of Sophia, who like any human is a work in progress. A multinational team of scientists and engineers are fine tuning her appearance and the algorithms that enable her to smile, blink and refine her understanding and communication.

Her skin is made of a nanotech material that Hanson invented and dubbed "Frubber," short for flesh-rubber, that has a flesh-like bouncy texture. Cameras in her eyes and a 3D sensor in her chest help her to "see," while the processor that serves as her brain combines facial and speech recognition, natural language processing, speech synthesis and a motion control system.

Sophia seems friendly and engaging, despite the unnatural pauses and cadence in her speech. Her predecessors include an Albert Einstein, complete with bushy mustache and white thatch of hair, a robot named Alice whose grimaces run a gamut of emotions and one eerily resembling the late sci-fi author Philip K. Dick, which won an award from the American Association of Artificial Intelligence. They variously leer, blink, smile and even crack jokes.

Disney's venture capital arm is an investor in Hanson, which is building a robot based on one of the entertainment giant's characters.

An artist and robotics scientist, Hanson worked on animatronic theme park shows, sculpting props and characters for Disney attractions like Pooh's Hunny Hunt and Mermaid Lagoon. He studied film, animation and video, eventually earning a doctorate in interactive arts and technology from the University of Texas at Dallas.

Hanson says he makes his robots as human-like as possible to help alleviate fears about robots, artificial intelligence and automation.

That runs contrary to a tendency in the industry to use cute robo-pets or overtly machine-like robots like Star Wars' R2-D2 to avoid the "uncanny valley" problem with human likenesses such as wax models and robots that many people find a bit creepy.

Some experts see Sophia as mainly a clever marketing gimmick.

"It's a good advertising tool, whatever that company produces as a business plan," said Roland Chin, chair professor of computer science at Hong Kong Baptist University.

Global market revenue for service robotics is forecast to grow from $3.7 billion in 2015 to $15 billion in 2020, according to IHS Markit. That includes both professional and domestic machines like warehouse automatons, smart vacuums and fuzzy companion robots.

Hanson Robotics is privately owned and has a consumer-oriented business that sells thousands of shoebox-sized $200 Professor Einstein educational robots a year. Chief Marketing Officer Jeanne Lim says the company is generating revenue but won't say whether it's profitable.

For now, artificial intelligence is best at doing specific tasks. It's another thing entirely for machines to learn a new ability, generalize that knowledge and apply it in different contexts, partly because of the massive amount of computing power needed to process such information so quickly.

"We're really very far from the kind of AI and robotics that you see in movies like 'Blade Runner'," said Pascale Fung, an engineering professor at Hong Kong University of Science and Technology. "Sorry to disappoint you."

Unlike toddlers, who use all five senses to learn quickly, machines generally can handle only one type of input at a time, she noted.

While Sophia's repartee can be entertaining, she's easily thrown off topic and her replies, based on open-source software, sometimes miss the mark.

Hanson and other members of his team like Chief Scientist Ben Goertzel have set their sights on a time when the computer chips, processing capacity and other technologies needed for artificial general intelligence could enable Sophia and other robots to fill a variety of uses, such as helping with therapy for autistic children, caring for seniors, and providing customer services.

As for tackling challenging world problems, that's a ways off, Hanson acknowledges.

"There's a certain expression of genius to be able to get up and cross the room and pour yourself a cup of coffee, and robots and AI have not achieved that level of intelligence reliably," Hanson said.