The promise of augmented and virtual reality was a big focus of Facebook's annual conference for developers on Tuesday. CEO Mark Zuckerberg kicked off the gathering of programmers and other tech folks by talking about augmented reality tools he envisions on Facebook. 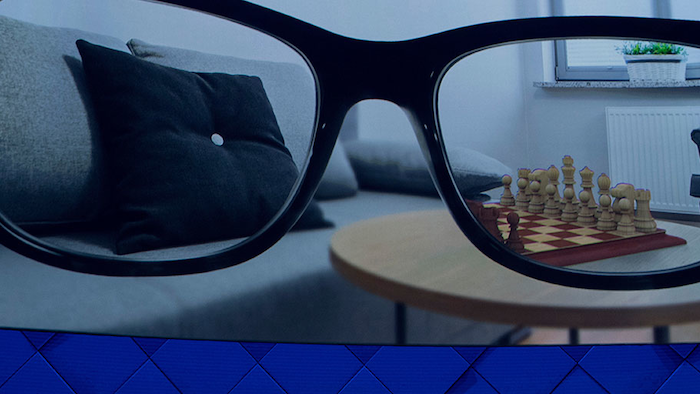 SAN JOSE, Calif. (AP) — Facebook wants you to sit in your bedroom wearing a headset and take a virtual vacation with faraway friends and family. Or use your smartphone's camera to spruce up your dinky apartment, at least virtually.

The promise of augmented and virtual reality was a big focus of Facebook's annual conference for developers on Tuesday. CEO Mark Zuckerberg kicked off the gathering of programmers and other tech folks by talking about augmented reality tools he envisions on Facebook.

Augmented reality involves the overlay of computer-generated images into real-world surroundings. Zuckerberg said new phone-based applications might let you create a three-dimensional scene from a single two-dimensional photo or splatter the walls of your house with colorful digital art. (You'd see the digital additions by looking "through" your phone at the augmented physical world.)

Facebook executives stressed that the technology is still in its early stages, and that the "journey to the future of augmented reality is just 1 percent finished," as Deb Liu, vice president of platform and marketplaces, put it.

Zuckerberg envisions the marriage of augmented reality and Facebook's camera feature enabling people to make even mundane chores, like doing the dishes, look entertaining with digital effects. Of course, it could also result in people staring into their smartphones even more intently as they marvel at an alternate reality instead of their actual surroundings.

"Over time, I think this is going to be a really important technology that changes how we use our phones," Zuckerberg predicted.

Facebook also launched a virtual world, called Facebook Spaces, designed to let users of its Oculus Rift VR headset hang out with avatar versions of their friends in a virtual world. It's the first time the company has connected the Rift to its social network in a meaningful way, though it's a development Zuckerberg hinted at when the company bought Oculus back in 2014 for $2 billion.

While the new tools and features are impressive, analyst Jan Dawson of Jackdaw Research cautioned that that "most of them won't be in users' hands anytime soon."

That's especially true for the Spaces app, since relatively few of Facebook's 1.9 billion members are using Oculus's VR headset, which sells for about $500 and requires an expensive computer to make it work.

But Facebook could still have the edge on rivals such as Snapchat, which also launched some augmented reality features on Tuesday, likely to coincide with Facebook's news. "Facebook has the resources to move fast in this area and the audience to spread those features much more widely than Snapchat," Dawson wrote in a brief research note.

Snap representatives did not immediately respond to an email for comment on Tuesday afternoon.

Facebook's focus on smartphones over high-tech glasses or headsets makes sense given how familiar they are, said Gartner analyst Brian Blau. "People already have cameras and are used to having fun and being creative with them," he said. "This will give people a chance to experience augmented reality in a way that isn't so scary or off-putting."

Until the past year or so, it seemed like it would be at least another decade before augmented reality would have a chance to become a widely used technology, said Ficus Kirkpatrick, Facebook's director of engineering. But advances in image and object recognition, along with the ubiquity of smartphone cameras, "has put us on the course to bring augmented reality," Kirkpatrick said in an interview.

Messenger head David Marcus claims the app has become the de facto "white pages" of messaging, since people can find and chat with friends without knowing their phone number. Now, Messenger wants to do the same for businesses, creating a "yellow pages" of sorts that let companies communicate with their customers.

Messenger will also let people chat with outside businesses as a group. That would, for instance, allow groups of friends to share Spotify playlists or to make a restaurant reservation through OpenTable that keeps everyone on the same page. The idea is simplify what might otherwise require a flurry of texts and sharing of links.

Zuckerberg also briefly addressed a tragedy that took place Monday, when a man posted video of a murder on Facebook. That raised questions about Facebook's ability to monitor gruesome material on its site.

The Facebook founder said his company has "a lot of work" to do on this front.