A robotic ray that swims toward light has made the cover of Science Magazine and is pushing the limits of what's possible in the design of machines powered by living cells. 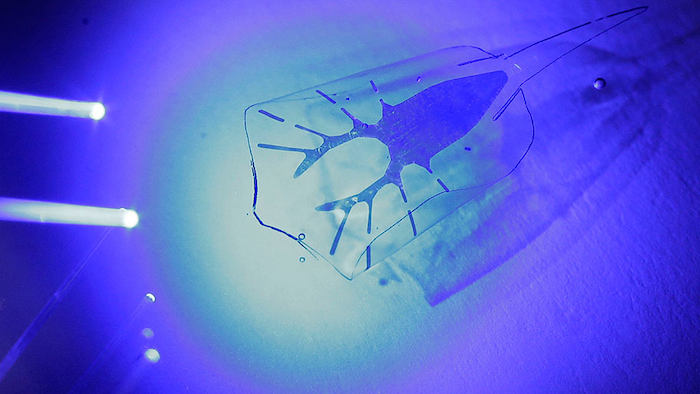 CAMBRIDGE, Mass. (AP) - The idea of taking apart a rat's heart and transforming it into a tissue-engineered stingray first came to Kevin Kit Parker during a trip to the New England Aquarium with his daughter.

Four years later, a robotic ray that swims toward light has made the cover of Science Magazine and is pushing the limits of what's possible in the design of machines powered by living cells.

A research team based at Harvard University's Disease Biophysics Group, which Parker directs, created the translucent, penny-sized ray with a gold skeleton and silicone fins layered with the heart muscle cells of a rat.

It's remote-controlled, guided by a blinking blue flashlight. Each burst of blue sets off a cascade of signals through the cells, which have been genetically-engineered to respond to light. The contraction of the tissue creates a downward motion on the ray's body. When the tissue relaxes, the gold skeleton recoils â moving the fin upward again in an undulating cycle that mimics the graceful swimming of a real ray or skate.

Parker, whose research includes cardiac cell biology, launched the project as a method for learning more about the mysteries of the human heart and a step toward the far-off goal of building an artificial one. But the interdisciplinary project is also sparking interest in other fields, from marine biology to robotics.

Parker is not a roboticist. But as an Army veteran who did two tours in Afghanistan, he welcomes any part his stingrays could play in advancing the development of machines able to perform dangerous jobs.

"Bio-hybrid machines â things with synthetic parts and living materials â they're going to happen," Parker said. "I've spent time getting shot at and seen people getting shot. If I could build a cyborg so my buddy doesn't have to crawl into that ditch to look for an IED, I'd do that in a heartbeat."

When he first asked postdoctoral researcher Sung-Jin Park to help him create the stingray four years ago, the bench scientist was doubtful.

"I had this whole idea of a laser-guided, tissue-engineered stingray made out of rat," Parker said. "He looked at me like a hog staring at a wristwatch. He was like, 'Have I trusted my career to this yahoo'? I think he thought I was unglued."

Indeed, the project to build the ray was more difficult and expensive â close to $1 million, according to Parker â than either of them imagined. A mechanical engineer by training, Park had to delve into molecular and cell biology. The team pulled experts from diverse fields, including an ichthyologist â someone who studies fish â to understand and help replicate a ray's muscle structure and biomechanics. Their work was published in Science last month.

Biologically-inspired robots aren't new. A precursor to the stingray was a tissue-engineered jellyfish Parker helped create in 2012, also with the aim of understanding the muscular pumping of a heart. But one of the robotic stingray's most intriguing contributions is the way it shows a glimpse of autonomy, said John Long, a professor of biology and cognitive science who directs Vassar College's Interdisciplinary Robotics Research Laboratory.

"By putting in the light control they have a way of controlling the cell without a nervous system," said Long, who was not involved in the stingray research. "We used to control puppets with strings. Now we can do it with light."

Long says the creation could spark new research into autonomous, part-living machines. He envisions a time when a packet of micro-rays could be unleashed into a busted sewage pipe with simple sensors to measure acidity.

The stingrays in Harvard's lab â Park and his colleagues built more than 200 of the tiny creatures during years of research â won't be going into any pipe or ocean. They swim in a pool of warm liquid solution filled with sugar and salt. The cells couldn't survive outside of a dish and weren't designed to, though Long said it would be possible to give a similar creature a skin that wraps up the solution and creates a kind of circulatory system. Battery power is a big challenge for robots, especially for tiny, lightweight machines, Long said, but creating a living power system of glucose-fed tissue could extend a robot's mission time. 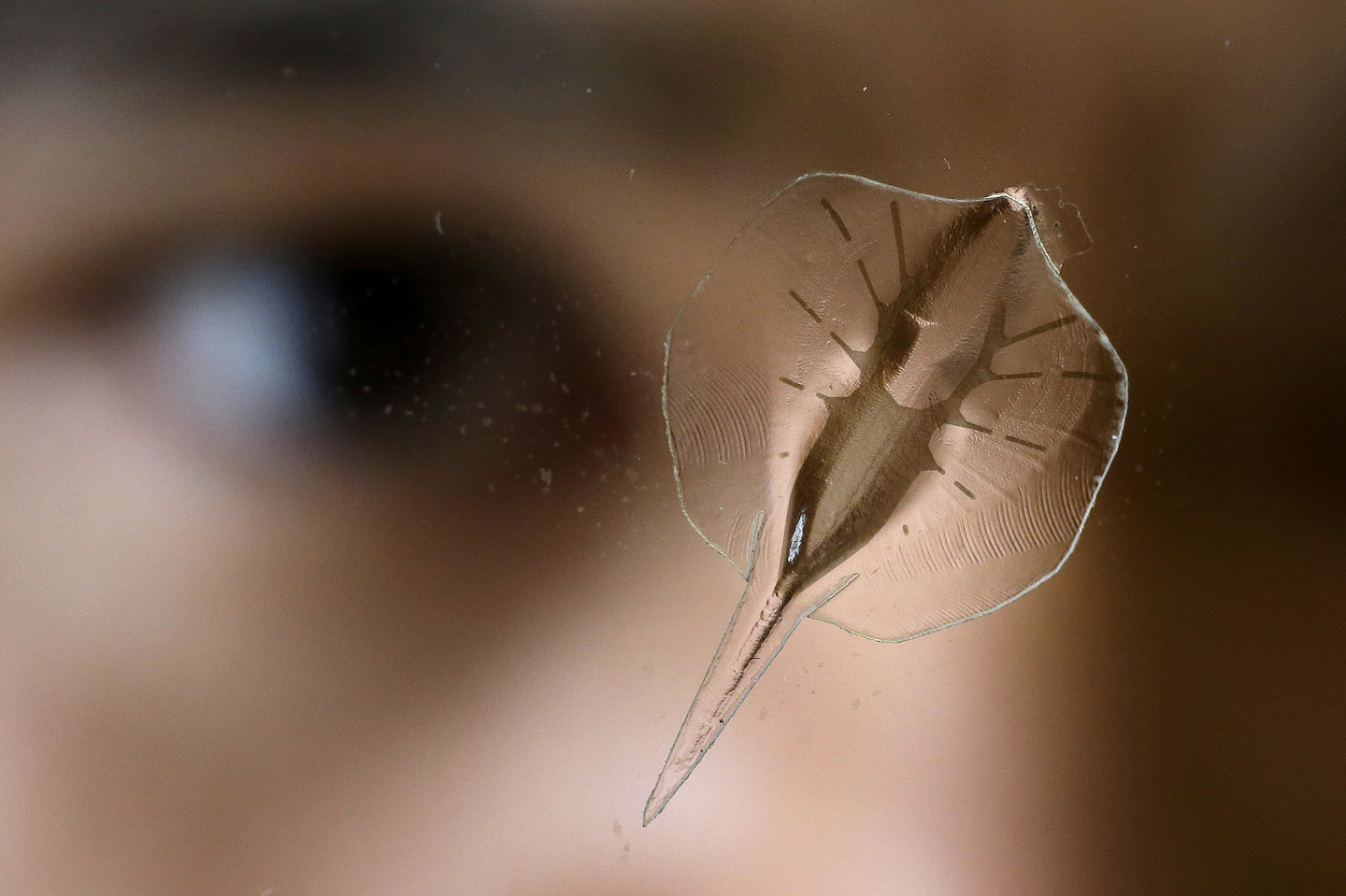 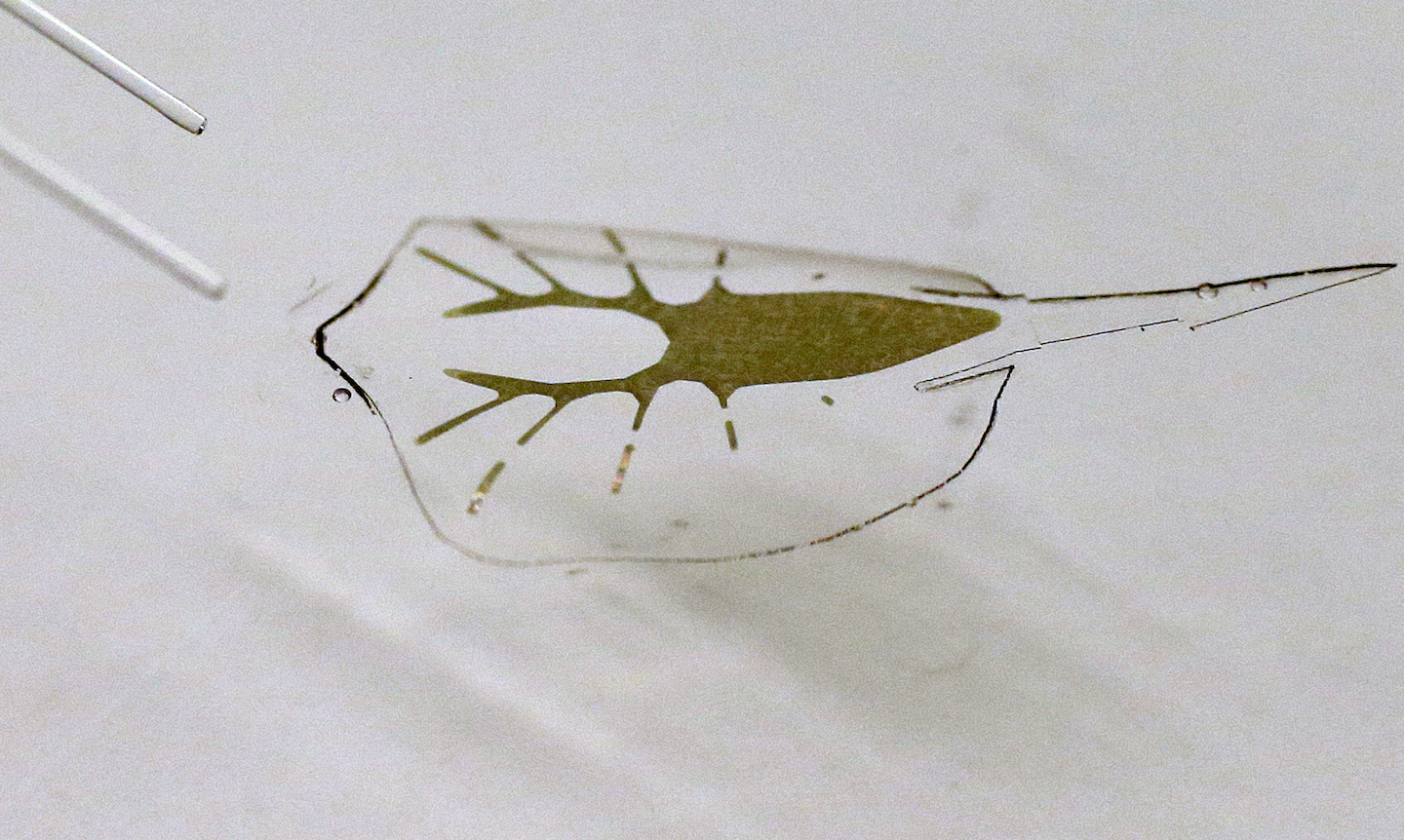 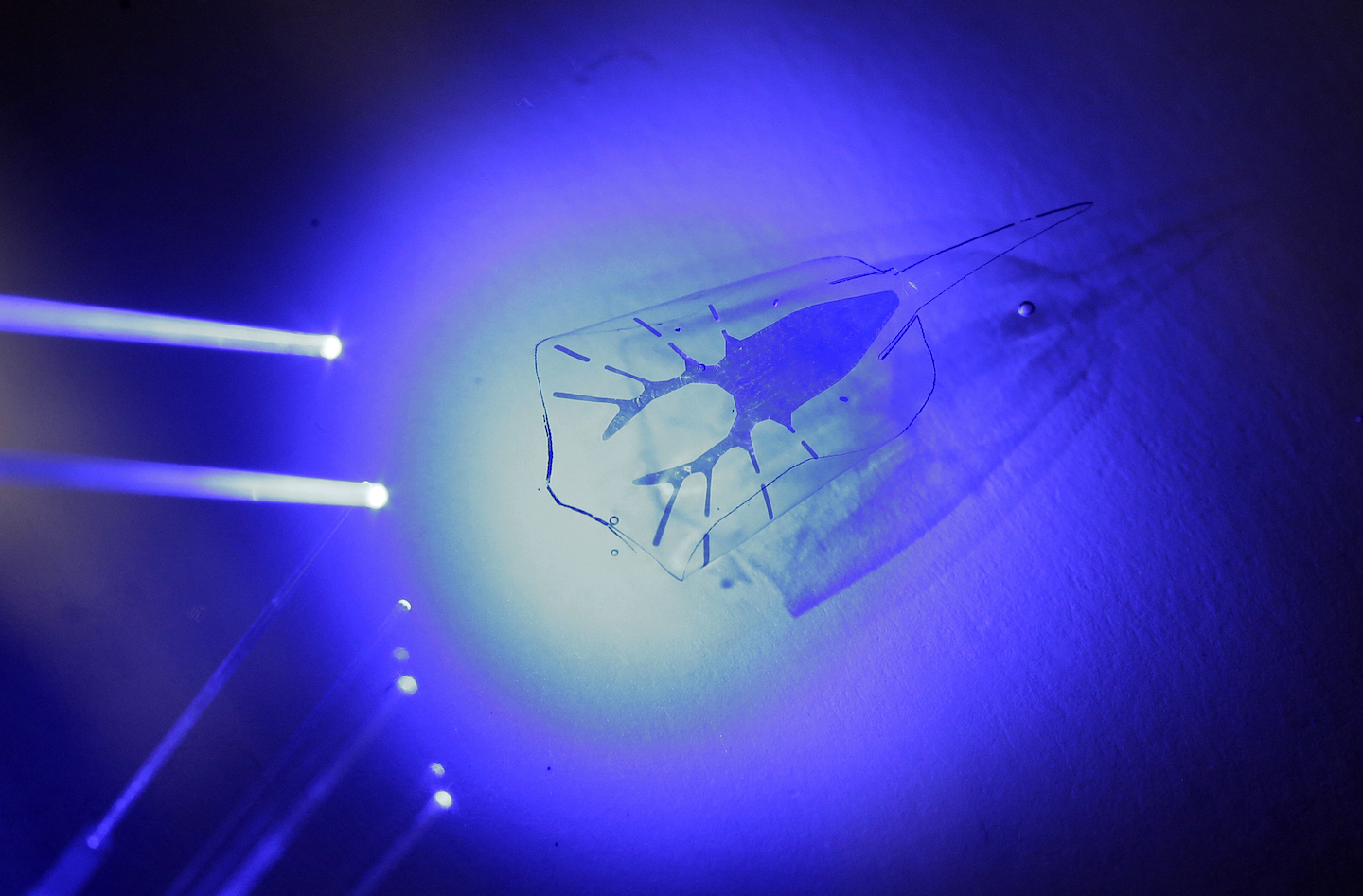