The road to a safer gun has been long. Initial efforts encountered a public wary of the technology, but that has eased as iPhones, tablets and other smart devices have become common. 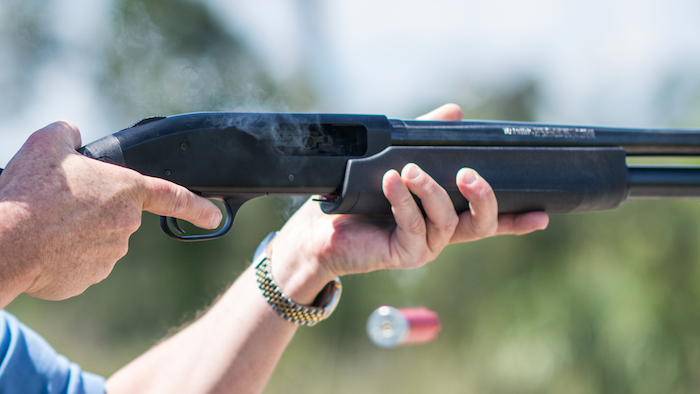 DAYTONA BEACH, Fla. (AP) — Jonathan Mossberg is among a small number of pioneers looking to build a safer gun. But unlike many others, he was in the gun business when he started down that path.

His family is renowned for its premier line of shotguns treasured by law enforcement, hunters and the military. Mossberg already has spent more than a decade working to develop — and someday bring to the market — a firearm that the wrong person cannot fire. It is intended to work without fail in the hands of its owner in a life-or-death situation.

Mossberg's iGun Technology Corp., based in Daytona Beach, Florida, relies on a simple piece of jewelry — a ring — that "talks" to a circuit board imbedded in a firearm to let it know the user is authorized. The ring must be within centimeters of the gun for the gun to fire.

The road to a safer gun has been long. Initial efforts encountered a public wary of the technology, but that has eased as iPhones, tablets and other smart devices have become common.

Mossberg isn't the only one attempting to bring a bit of James Bond to firearms.

Others are exploring biometrics, like an iPhone lock that opens with your fingerprint. Some rely on radio-frequency identification, or RFID, technology, proximity sensors similar to the system Mossberg's company uses. Some use watches to send a signal to the firearm.

They've had varying degrees of success, but none has been broadly marketed so far.

On Friday, President Barack Obama announced new steps to curb gun violence, including by identifying the requirements "smart guns" would have to meet for law enforcement agencies to buy and use them.

"As long as we've got the technology to prevent a criminal from stealing and using your smartphone, then we should be able to prevent the wrong person from pulling a trigger on a gun," Obama said.

The departments of Justice and Homeland Security said in a report Friday that they expect to complete the work of identifying the smart-gun requirements by October.

"The technologies are a reality now," said Stephen Teret, a professor of health policy and management at Johns Hopkins Bloomberg School of Public Health who studies gun violence and gun policies. "There are obstacles still in getting those technologies into guns and getting guns into the civilian marketplace."

Among them is cost. Modernizing gun manufacturing would mean higher prices for smart weapons.

Then there's politics. The industry is concerned that success with the technology would encourage the government to mandate it.

And the powerful gun lobby raises red flags about reliability. What happens if the firearm isn't syncing with the radio signal or the fingerprint isn't recognized? In a crisis, seconds are precious.

"If you need it to protect yourself and it doesn't work, that's a bad outcome," said Larry Keane, senior vice president and general counsel for the National Shooting Sports Foundation, which represents manufacturers. "Reliability is everything ... If your iPhone doesn't work, you're inconvenienced. You're not dead."

Mossberg's interest in smart-gun technology stemmed from a rise in police being killed with their own service weapons in the 1990s. Law enforcement didn't embrace the idea, preferring to use holsters that made it more difficult for a suspect to disarm an officer.

He switched gears and began developing a firearm for civilians, only to find resistance there, too. Many people in the focus groups he conducted around the country told him they wanted nothing to do with a gun that contained a circuit board.

Mossberg said the shotgun his company is developing has been tested more than 3,000 times with no failures. The next challenge: shrinking the circuit board so it fits into a handgun.