The Blimp On The Loose Saga Explained

The U.S. military has begun efforts to remove an Army radar blimp from the woods in northeast Pennsylvania, where the high-tech radar system crashed after it broke free from its mooring at Aberdeen Proving Grounds in Maryland. 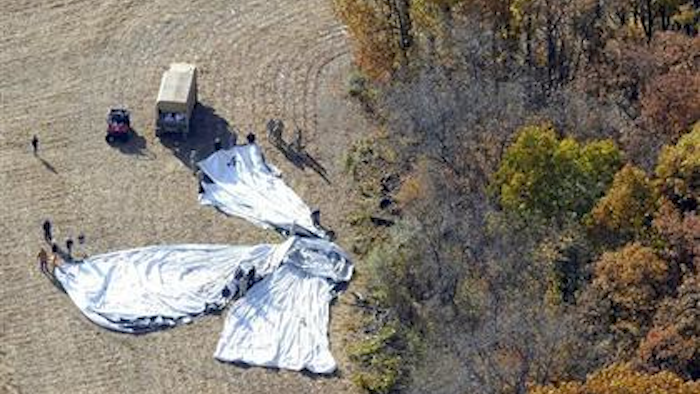 The U.S. military has begun efforts to remove an Army radar blimp from the woods in northeast Pennsylvania, where the high-tech radar system crashed after it broke free from its mooring at Aberdeen Proving Grounds in Maryland.

The radar system was built by Raytheon and is made up of two unmanned, helium-filled aerostats — also called tethered airships or blimps. One carries wide-area surveillance radar that can look in a 360-degree circle; the other carries fire control radar, which is designed to provide more specific targeting information.

The device is 242 feet long, floats about 10,000 feet in the air and is anchored to the ground by a 1-1/8-inch thick cable that carries electricity to the blimp and is supposed to be strong enough to withstand 100 mph winds. According to Raytheon's website, the cable tether once withstood a storm with 106 mph winds.

The two-blimp system is part of a three-year operational test at Aberdeen Proving Ground outside Baltimore.

WHAT DOES IT DO?

The JLENS is part of the military's national defense capabilities and is designed to detect cruise missiles and other threats to the Washington, D.C., region. It can detect moving pieces of machinery as far away as 340 miles and can stay up in the air for up to 30 days at a time. It does not carry any weapons or cameras.

HOW MUCH DOES IT COST?

A single radar blimp costs $235 million, but the Army has spent more than $2.6 billion on the system since research and development began.

HOW DID IT GET LOOSE?

So far, no one knows how the blimp was able to get loose. The cable that dangled from the blimp as it floated from Maryland to Pennsylvania was more than 6,000 feet long, according to officials, suggesting it became detached close to the ground.

According to defense officials, there is no indication the incident was caused by terrorism or other malicious intent.

When it came loose, it was tracked by the North American Aerospace Defense Command (NORAD) and reached an altitude of about 16,000 feet before it finally began to descend. It crashed in rugged woods near Muncy, Pa., about four hours later, landing in two pieces — the tail and the larger body — that were about a quarter-mile apart.

According to Defense Secretary Ash Carter, other blimps have broken free in the past, but this has never happened to one of the JLENS in more than 400,000 hours of operations.

HOW DID IT CRASH?

Pentagon officials say the automatic deflating system did not appear to work, so the blimp slowly lost air until it crashed. In conjunction with the Pennsylvania State Police, personnel used shotguns to deflate the aerostat once it was on the ground. They quickly removed sensitive radar equipment.

On Thursday, a recovery team of more than 65 military and civilian experts from Aberdeen and from Raytheon began to move the deflated blimp to a staging base at the National Guard Armory in Danville, Pa. The tail section was being moved first.

Two investigators from the U.S. Army Combat Readiness Center at Fort Rucker, Ala., flew to Pennsylvania Thursday to lead the probe. That team could grow larger if needed.

The military also has a claims process that can take care of any costs stemming from the incident, including the power losses. Anyone who believes he or she has a claim can contact the local military base and get information about the process.