The design, first announced in April, is one of three ANA planes that will feature Star Wars characters under a five-year promotional agreement with Disney. 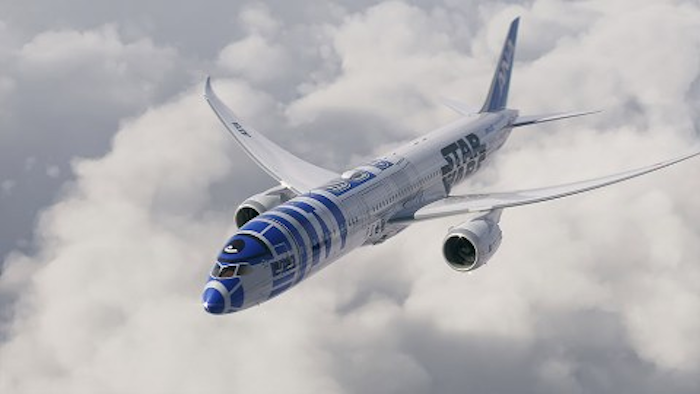 The first Boeing airplane produced as part of a partnership between a Japanese airline and the Disney-owned Star Wars franchise debuted over the weekend at the aerospace giant's plant in Everett, Washington.

USA Today reports that the nose of the All Nippon Airways 787 Dreamliner is painted to resemble the R2-D2 robot, while the franchise’s logo adorns the side of the plane.

The design, first announced in April, is one of three ANA planes that will feature Star Wars characters under a five-year promotional agreement with Disney.

The second plane will feature the BB-8 robot from the forthcoming Star Wars film, while a third will include both droids.

The first Star Wars 787 will begin flying next month with an initial commercial flight between Tokyo and Vancouver. The latter two planes are scheduled to hit the air in 2016.