"If you can hover a train, why not a building?" 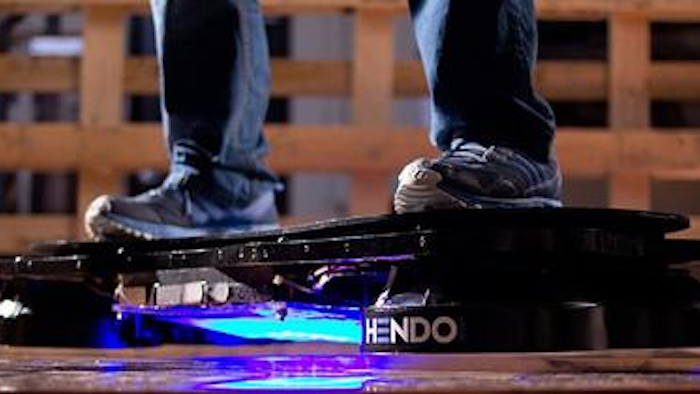 After the Loma Prieta earthquake, Greg Henderson began to look at ways to build more sustainable and earthquake resistant buildings. The idea came when he asked himself, "If you can hover a train, why not a building?"

With this radical idea, however, Henderson needed to start small, so he took to Kickstarter with the Hendo Hoverboard, which was touted as world's first real hoverboard. Henderson quickly raised $510,590 – and the subsequent response has been anything but small, the hoverboard even madeTime’s 25 Best Inventions of 2014.

“There is so much potential for this technology that it can sometimes be a challenge to pick a direction to focus on,” says Henderson, Arx Pax Co-Founder and CEO. “It could be utilized to move people and goods more efficiently, for saving lives and livelihoods during earthquakes and floods,” he adds. “We continue to come up with new ways this technology could be implemented in the world around us.”

This week, Arx Pax was officially assigned the patent for a “hoverboard which generates magnetic lift to carry a person.” Henderson’s first patent for “hoverboard” was filed in October 2014. Multiple patents followed, such as those for the magnet arrangement, and propulsion and control. However, Henderson was originally assigned a patent for “magnetic levitation of a stationary or moving object” in 2013.

The hoverboard’s core technology is magnetic field architecture (MFA), which focuses on more efficiently opposing magnetic fields. Henderson explains that picking the most innovative piece of technology involved, is a bit like asking a parent to pick a favorite child. “At this juncture, the most valuable piece [of technology] is probably the design of our hover engines,” he adds.

The hover engines each include an electric motor which rotates an array of magnets. (The patent provides the example of one inch cube neodymium alloy magnets of strength N50 that weigh about 3.6 ounces each).

To move forward and steer, the rider simply tilts the board in the direction they wish to go. According to the patent, “the amount of tilt in a particular direction can affect the amount of force imbalance and hence the magnitude of the acceleration.”

The team used 3D printing to rapidly prototype parts, but also turned to local machine shops for components, as well as making some themselves at TechShop, a member-based workshops that provides tools and equipment. CAD work was done in both Solidworks, AutoCAD, and Vectorworks. The magnetic modeling was done in ANSYS Maxwell.

“Many of our hoverboard designs have been rapid prototyped in-house using plywood chassis to determine the best configurations before we have metal parts fabricated,” adds Henderson.

While the design has already received a great deal of attention, Henderson hopes to continue to grow and expand the research and design of the MFA technology. “We're looking to work with strategic partners to grow our resources, as well as getting this technology out into the hands of the public to generate new areas where it our MFA might be utilized,” he adds. “We want to inspire co-creation on a global scale.”

However, for Henderson, the technology used to enable the hoverboard is far more important than the exorbitant toy itself – after all, his original idea was to hover entire buildings.

“I take it as my personal responsibility, my duty to demonstrate a better way to build in areas subject to natural disasters,” says Henderson, who hopes to lead the construction industry by example, providing more sustainable, cost effective alternatives.

But before Henderson developed the hoverboard’s technology, his idea for hovering buildings was much simpler. The patent, “Methods and apparatus of building construction resisting earthquake and flood damage,” was filed in March 2013, seven months before he filed for the magnetic levitation patent.

Two years later, Henderson is now famous for his hoverboard design, not floating buildings; however, it was his original passion to create an earthquake-proof structure that lead the development.

“At an altruistic level, our technology has the ability to change the way we think about how communities are designed and built - from family homes, to hospital rooms, to factories, to skyscrapers,” says Henderson. “We can build structures such that, with the flip of a switch, they are lifted out of harm’s way. The potential ravages of earthquakes and floods will no longer hold sway over occupants of these buildings.”

Before October 2014, Wikipedia described the hoverboard as a fictional levitating board seen most notably in the Back to the Future movies, it now describes several real hoverboard designs. And while the idea of hoverbuildings seem farfetched, so once, did hoverboards. What will Henderson think of next?