European aircraft maker ATR is in the spotlight again after the dramatic crash Wednesday of a TransAsia Airways turboprop into a river in Taiwan. It's the second time in seven months that a TransAsia ATR has been involved in a fatal accident. 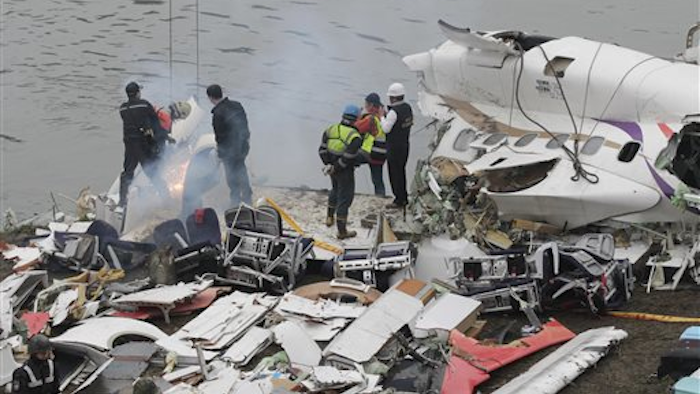 Hong Kong — European aircraft maker ATR is in the spotlight again after the dramatic crash Wednesday of a TransAsia Airways turboprop into a river in Taiwan. It's the second time in seven months that a TransAsia ATR has been involved in a fatal accident.

Regional aircraft maker ATR is a joint venture between European aircraft giant Airbus and Italian aerospace company Alenia Aermacchi. The company, which makes turboprop planes with up to 90 seats, was founded in 1981 when the predecessors of its parent companies merged. It's based in Toulouse, France, also home to Airbus.

ATR and rivals such as Canada's Bombardier and Brazil's Embraer are benefiting from growing demand for their smaller aircraft as air travel booms in developing nations, particularly in Asia. Meanwhile, soaring fuel prices in recent years forced airlines to stop operating smaller regional jets in favor of either turboprops, which are more fuel efficient, or bigger jet aircraft, which bring economies of scale.

The company's two main aircraft are the 50-seat ATR 42 and 70-seat ATR 72, both turboprops. The ATR 72's maiden flight was in October 1988. The 72-500 model came into service in 1996, followed in August 2011 by the 72-600 version, which has better fuel efficiency and a roomier passenger cabin. ATR boasts that its planes are more fuel efficient than jets because the engines reuse exhaust from the turbines to drive the propellers. About 20 percent of the aircraft is made of lightweight composite material, which also helps reduce fuel use and emissions.

ATR 72s have been involved in 10 accidents since 1994 that resulted in more than 350 deaths, according to data compiled by the Aviation Safety Network. A TransAsia plane crash seven months ago in Taiwan's Penghu archipelago killed 48 people. In 2013, all 49 people aboard a Lao Airlines plane died when it crashed in the Mekong River during a heavy storm as it was about to land. Other recent serious accidents include the 2012 crash of an UTAir plane shortly after takeoff from Tyumen, Russia killing all 29 aboard and the 2010 crash of an Aerocaribbean plane in Cuba that killed 68. The smaller ATR 42 has been involved in eight accidents since 1987 that killed 172 people.

Airlines all over the world use ATRs, and the company says there are more than 180 operators in more than 90 countries. From 1981 until the end of 2014, the company had delivered a total of 1,190 aircraft: 754 ATR 72s and 436 ATR 42s. It has an order backlog of 280 planes worth $6.8 billion that it says will keep its production lines busy for nearly three years. Its biggest customer is Indonesia's Lion Air, which last year signed a $1 billion deal to buy 40 ATR 72-600s, suggesting that each plane costs about $25 million. The deal brings Lion's total orders for that model to 100. Other Asian regional carriers that bought ATR planes last year include Bangkok Airways, which in November received the first of nine ordered, and Myanma Airways, which signed a deal for up to 12.