Amphibious Vehicle To Go On Sale Soon In U.S.

Amphibious vehicles could soon be zooming out of James Bond's garage — or pond — and into American homes. The Quadski — a one-person all-terrain vehicle that doubles as a personal watercraft — is being billed by its makers as the first high-speed, commercially available amphibious vehicle. 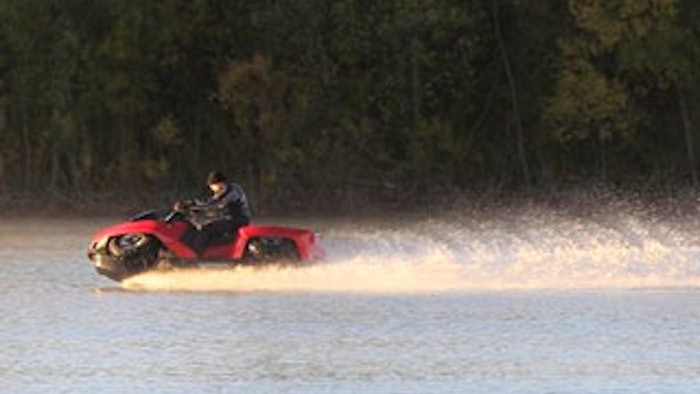 DETROIT (AP) — Amphibious vehicles could soon be zooming out of James Bond's garage — or pond — and into American homes.

The Quadski — a one-person all-terrain vehicle that doubles as a personal watercraft — is being billed by its makers as the first high-speed, commercially available amphibious vehicle. It's scheduled to go on sale in the U.S. by the end of this year for around $40,000. Michigan-based Gibbs Sports Amphibians Inc. hopes to sell the vehicle worldwide by 2014.

With its all-terrain tires and four-cylinder, BMW-supplied engine, the Quadski can drive up to 45 miles (72 kilometers) per hour on land. To take it into the water, the driver presses a button. In five seconds, the four wheels fold up and tuck into the sides. The Quadski can go a brisk 45 miles (72 kilometers) per hour in the water before a press of the button brings the wheels out again.

"You just drive straight into the water, quite fast, and keep on going. It's sort of magic," the founder of Gibbs Sports Amphibians, Alan Gibbs, told The Associated Press in a recent interview.

History is littered with attempts to make fast, long-lasting amphibious cars, from the campy German Amphicar of the early 1960s to current companies that rework sports cars by hand for $200,000 or more. But Gibbs, a former diplomat and entrepreneur from New Zealand, says the Quadski is the first land vehicle for sale that can go more than 10 mph (16 kph) in water. A lightweight, fiberglass hull and front wheels that rise mechanically when the vehicle hits the water are among the tricks the Quadski uses.

Gibbs, who has made everything from bras to television sets over a long career in New Zealand and the U.K., launched Gibbs Sports Amphibians 16 years ago after building his own amphibious car and wondering if he could make it on a larger scale. Since then, the company has spent $200 million, built nine prototypes and amassed more than 300 patents.

"It seems so simple, but it's really difficult," Gibbs said.

The Quadski isn't Gibbs' first vehicle. That honor belongs to the three-seat Aquada, which debuted in 2003 and goes 100 mph (160 kph) on land and 30 mph (48 kph) in the water. Virgin Group CEO Richard Branson used an Aquada in 2004 when he set an amphibious vehicle speed record crossing the English Channel.

But the Aquada never went on sale. First its engine supplier, Rover, went out of business. Then U.S. safety regulators wouldn't approve it for street use because of several safety issues. The government insisted on air bags, for example, even though Gibbs argued that they might deploy every time the Aquada hit a large wave.

Gibbs Sports Amphibians hopes to turn things around with the Quadski, which has fewer safety requirements because it's an ATV. The company's target customers are outdoor sportsmen as well as first responders. The Quadski will come in five colors and will be available at power sports dealers, concentrated in Florida, Texas, the New York to Boston corridor and the Great Lakes region.

Ryan Brown, a salesman at Carter Powersports in Las Vegas, has never heard of another vehicle like the Quadski and thinks it's a great concept. But he's not sure customers will pay $40,000 for one when a standard ATV costs between $4,400 and $10,000.

"These are toys people don't have a lot of extra money for right now," he said. "People are having a hard enough time getting financed on a $5,000 motorcycle."

The Quadski will be made at the company's Auburn Hills, Michigan, factory, a former Daewoo Group parts plant. Gibbs Chairman and CEO Neil Jenkins said the company now has 100 employees at the plant. It plans to produce 20 Quadskis per day with 150 employees when the plant is in full operation. The company expects to sell around 1,000 Quadskis in the first year, but Gibbs says he won't be disappointed if the company doesn't meet its sales targets.

"We'll respond to how the market develops," he said. "We wouldn't be doing it without being very confident people will love them."

Gibbs said the company may return to the Aquada someday and try to make it street legal for U.S. buyers. In the meantime it's planning eight personal sports vehicles based on the Quadski, including some with more seating and SUV-like proportions.

The company is also preparing to introduce the Phibian, a 30-foot (nine-meter) long, 6.5-ton model, and the Humdinga, a 22-foot (6.6-meter), 3.5-ton model, which are both intended for the military and first responders, Gibbs said. The company is looking for partners to produce those vehicles.