A steady push toward mechanization in Maine's blueberry industry is reducing the number of migrant farmers who travel to the state to rake the crop, which is vitally important to the state's economy, state officials and industry leaders said. 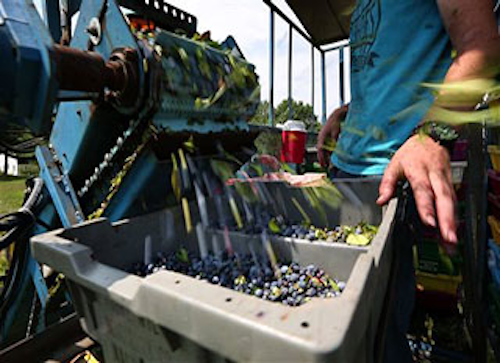 DEBLOIS, Maine (AP) — Mary Marshall grew up living the life of a migrant farmer, spending hours under the hot summer sun picking wild blueberries with her parents and eight siblings, then ending the day bathing in a lake.

It was grueling work that she looks back on fondly — a way of life that brought people of different cultures to the camps in Maine's vast blueberry barrens. And she laments the way it is disappearing.

"Machines are taking over. Even just going down to the camps, I see a lot of machinery. That's pretty sad," said Marshall, who harvested berries 40 years ago. "Our people could really pick that."

A steady push toward mechanization in Maine's blueberry industry is reducing the number of migrant farmers who travel to the state to rake the crop, which is vitally important to the state's economy, state officials and industry leaders said. Maine's blueberry harvest attracted more than 5,000 migrant farmers 10 years ago and it's down to about 1,500 today, said David Yarborough, a University of Maine professor of horticulture.

This year, migrant farmers will pick some 90 million pounds of the wild blueberries — praised for their benefits as an anti-oxidant rich food — that are indigenous in Maine and parts of Canada. They will form communities of their own that revolve around hubs like the Blueberry Harvest School and ethnic restaurants such as the migrant-founded Vazquez Mexican Takeout. There's even an end-of-harvest Wyman's Cup soccer competition for pickers at Jasper Wyman and Son.

The increasing harvests came alongside the development of mechanized harvesters — heavy pieces of machinery operated by a driver — which started to play more of a role in the 1990s, workers in the industry said. Some blueberry operations have gone almost completely mechanized, and more are headed in that direction, Yarborough said.

The trend means less work for migrant farmers who have long relied on blueberry season as a chance to earn several hundred dollars per week in the summer. The season typically begins in late July and ends around Labor Day.

"It's really gone down considerably," Yarborough said. "It's subject to drop as we produce more and better machines."

Growing mechanization is also making the nature of the remaining work more difficult. Rakers are left to work in parts of the fields that the mechanical harvesters can't reach, like ditches and uneven land.

That makes a form of labor that already includes repetitive lifting and bending in the hot sun even more difficult.

"Our people are sent out to the gullies," said Marshall, who now travels to Maine every summer to work at Blueberry Harvest School.

The state has some 44,000 acres of wild blueberries, based mostly in the rural Downeast area, and the state relies on the berries for about $250 million per year in economic value, official said. Blueberries are also one of the state's key cultural identifiers, along with lighthouses and lobsters.

"Things are changing as more machines take to the fields in place of hand crews," Flanagan said.

It remains to be seen if the trend will eventually jeopardize the existence of the community that has grown around migrant blueberry farming every year. But Briana Mejia, a raker who has been coming to work the fields for seven years, said the trend toward machines and away from workers is clear.

"When someone builds a bigger, better machine that can do the gullies, what's going to happen then?" Mejia said. "It's all about making money."