Health-conscious consumers might be persuaded to eat more beef if it was fortified with heart-healthy omega-3 fatty acids naturally found in salmon and walnuts, according to researchers and some ranchers who are feeding cattle flaxseed — even marine algae — with an eye to offering another wholesome dinner choice. 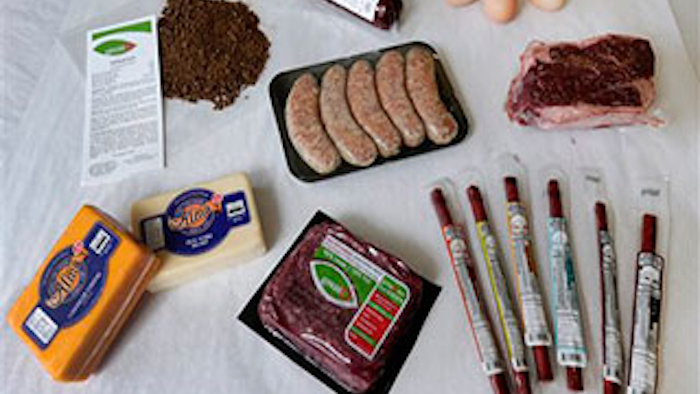 WICHITA, Kan. (AP) — Health-conscious consumers might be persuaded to eat more beef if it was fortified with heart-healthy omega-3 fatty acids naturally found in salmon and walnuts, according to researchers and some ranchers who are feeding cattle flaxseed — even marine algae — with an eye to offering another wholesome dinner choice.

People have long been told they can decrease their risk of heart disease by eating more omega-3 fatty acids, the kind salmon get from algae. It inspired researchers at Kansas State University: Could the steaks and hamburgers from cattle fattened on algae pass on those healthy fats?

Separately, some Texas grocery stores are selling beef products fortified with omega-3 through flaxseed, a trial run so successful that orders have quadrupled since it began seven months ago. And a nationwide study shows consumers would be willing to pay $1.85 a pound more for enriched steaks and 79 cents a pound more for enhanced ground beef, Kansas State agricultural economist Sean Fox said.

After putting a pot roast into her shopping basket at a Wichita grocery store, 31-year-old Lindsey Goodwin considered that very question. "Probably, it kind of depends on the price," she said.

But Terry Cooper, 36, was skeptical, adding that the university might have an "uphill battle" persuading people to eat more beef. "The reality is we all eat more junk food ... but we think we should eat healthy," Cooper said.

Algae contains the omega-3 type fatty acids known as eicosapentaenoic acid (EPA) and docosahexaenoic acid (DHA), which nutrition experts say people should consume at least 250 mg per day of both because of their protective effects on the heart; DHA is also associated with infant brain development. A third omega-3 type is alpha-linoleic acid (ALA), which is abundant in flaxseed.

Ground beef from cattle that eat grass, a natural source of omega-3s, contains about 20 to 30 mg in a 5-ounce serving. That increases to at least 200 mg per 5-ounce serving when cattle are fed algae or flaxseed rations, Kansas State researcher Jim Drouillard said.

Other omega-3 fortified foods are commercially available — such as eggs, bacon and chicken. Yet salmon is king, providing 10 times the amount of omega-3s than enriched beef products — at least 2,000 mg in a 5-ounce serving.

Cost comes into play when making omega-3 fortified beef more widely available. Researchers are examining whether algae is an economically feasible feed, given that commercial sources are scarce. Beef produced from cattle that eat algae contains more of the EPA and DHA fatty acids than cattle fed only flaxseed, Drouillard said.

All told, it may not raise consumer prices more than 15 to 20 cents a pound extra according to Bernie Hansen, founder of GreatO Premium Foods. He said the added costs of fattening livestock on flaxseed-based rations would be mostly offset by the lower costs of raising animals which are healthier and need fewer antibiotics.

The Manhattan, Kansas-based company, which for 14 years has researched how to produce omega-3 enhanced beef using flaxseed at an economically viable price, is test-marketing its fortified ground beef in 50 HEB supermarkets in Texas. When the trial began almost seven months ago, HEB was ordering about 100 cases every two weeks, each containing a dozen 1-pound packages of the omega-3 enriched beef. The response from shoppers was so good that within six months HEB increased its order to 400 cases, Hansen said.

Restaurant owner Suman Hoque says the omega-3 steaks have more marbling and are more tender and flavorful than leaner grass-fed beef. His patrons noticed, and have been coming back for it, said Hoque, who is selling about 200 steaks a week and buying about 1½ times more enriched beef this year than he did a year ago of just grass-fed beef.

"People love these. ... I sell more meat than anything else," Hoque said.

Sara Schwertfeger, a 31-year-old stay-at-home mom from Urbandale, Iowa, and a dietitian by training, knows the benefits of omega-3s, and purchases enriched eggs, salmon, walnuts, grass-fed beef and the beef sticks. But she doesn't know whether she would buy omega-3 enriched beef if it came from cattle fattened in a feedlot.

"It probably comes down to not only the nutrition," she said, "but if you also want to care about how they are raised."

The idea behind omega-3 fortified beef products isn't to tell people what they should or shouldn't eat, Hansen said, but to make what they're already eating healthier.