Away from the stadiums, it's the most hectic place at the Paralympic Games. 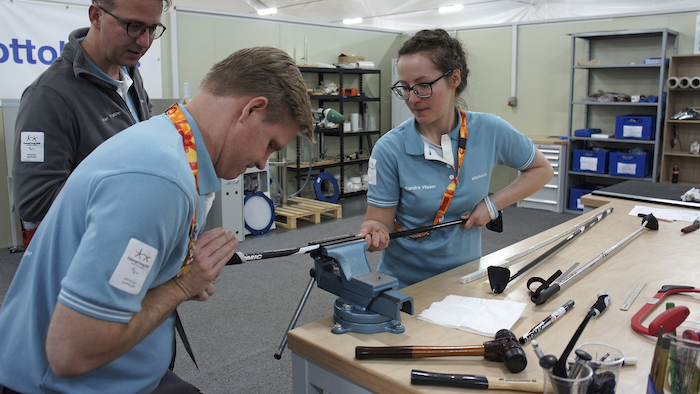 In this March 13, 2018, photo, John Spillar, second from left, one of Ottobock's American specialists who previously worked at the Parapan American Games and Invictus Games, works with an unidentified his colleague as Peter Franzel, left top, a director at Ottobock, watches at Pyeongchang's athletes' village in Pyeongchang, South Korea. Image credit: AP Photo/Kim Tong-hyung

Away from the stadiums, it's the most hectic place at the Paralympic Games — a white warehouse on a corner of Pyeongchang's athletes' village, where a team of technicians hustle around the clock to carve, weld and sew items near piles of bionic hands, feet and knees.

There are also stacked boxes of jumbled wheelchair parts and several huge machines used to repair the equipment that brought hundreds of disabled athletes from around the world to the sleepy ski resort town in South Korea's rural east.

Here, a team of 23 international specialists employed by Germany's Ottobock are asked to fix anything and everything — from broken wheelchairs and prosthetic limbs to hockey sleds and sit-skis in need of repair.

The unpredictable and pressure-filled job highlights the vital role of devices at the highest level of disabled sports.

"At the moment, it's absolutely quiet, but you never know," said Peter Franzel, a director at Ottobock, during what he said was a relatively calm morning at the repair shop in Pyeongchang this week. "In two minutes, the door opens and 10 athletes come in with a problem and we're suddenly very, very busy."

Franzel spoke as a pair of technicians hammered, stretched and sawed off the ski poles of a Swiss athlete who wanted them shortened. Others worked to fix a pair of wheelchair tires and frames.

That doesn't include the thousands of nuts and bolts, many boxes of glue and tape, and a variety of machines for sewing, carving and welding sports equipment and prosthetic limbs. There's also a high-tech system made of computers, cameras and laser equipment for measuring the balance and fit of the repaired devices.

As of Wednesday, Ottobock's technicians had handled more than 300 repairs at the Paralympic Games, which began on March 9 and continue through Sunday. The company expects the number of repairs to exceed 400 by the games' end, said spokeswoman Merle Florstedt.

In addition to the 300-square-meter (3,200-square foot) main repair office at the athletes' village, Ottobock also operates smaller repair shops at Pyeongchang's alpine skiing and biathlon venues and a hockey arena at nearby Gangneung.

The technicians at Pyeongchang come from nine countries, including the United States, Germany, Norway, Sweden, South Korea, Japan and China. Translators hired by teams and a translation app on smartphones further assist communication between technicians and athletes.

"We do have to be very creative in how we find solutions for these patients because with so many different parts and pieces, we have to be very inventive on what we are going to do," said John Spillar, one of Ottobock's American specialists who previously worked at the Parapan American Games and Invictus Games.

About 60 to 70 percent of the repairs so far have been wheelchairs, simply because so many of the 670 athletes at Pyeongchang rely on them, said Franzel.

"Everyone is pin trading here," he said. "We see some flat tires because of (dropped) pins."

Some jobs are easier than others. The first repair job at Pyeongchang was super-gluing the broken frame of the glasses an athlete had dropped, Franzel said. Canada's chef de mission, Todd Nicholson, wanted the length of his parka trimmed before the opening ceremony. A Polish athlete asked technicians to fix a broken wheel on his luggage bag.

The more complex repairs come from sports like fast and physical sled ice hockey games where players with lower limb impairments fly around the ice on lightweight aluminum sleds while banging into each other at high speeds.

On Tuesday, Spillar had just finished fixing a broken sled nose for an Italian hockey player, who temporarily came out of the team's 2-0 win over Sweden on Monday to switch to a back-up sled. Spillar said he had to re-weld both sides of the device, create a new pipe and attach additional struts to strengthen rigidity.

During the same game, Swedish forward Maximilian Gyllsten, who had his right leg amputated below the knee following a 2013 car accident, injured his left leg and later came to the repair shop asking for a protective covering that would help him play through pain.

The most difficult challenge so far has been the case of Croatian cross-country skier Josip Zima, who came to the repair shop angry and fearful that he might not be able to compete at the games at all. His team had sent Zima the wrong sit-ski to Pyeongchang and there was no way he could fit into a much smaller device that originally belonged to a female teammate.

"We were going to do everything that we could to get him out there on the field," Spillar said.

It took five technicians about eight hours to completely take the device apart and create an entirely new one that Zima could compete in. Metal bars and tubing were welded into the frame to expand the device. The technicians also had to realign the entire chair so that it could support the heavier Zima, which required installing additional struts and supports. Zima "jumped" on his new sit-ski the next day as was "so happy," according to Franzel.

But some repair jobs end with smiles; others don't.

The new leg shelter allowed Gyllsten, the Swedish hockey player, to play in the team's next game against Norway on Tuesday — and he scored Sweden's only goal in a 3-1 loss.

Things didn't end as well for Zima. His new device broke apart during the men's 1.1-kilometer sprint at Pyeongchang's Alpensia Biathlon Center on Wednesday. Zima improvised and finished the race but came last among the 35 athletes who completed the race.