GE plans to build the world’s most powerful offshore wind turbine, which will produce 67 gigawatt-hours per year. 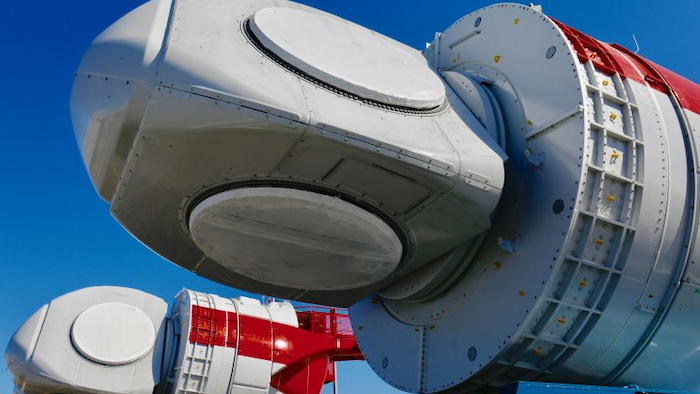 GE plans to build the world’s most powerful offshore wind turbine, which will produce 67 gigawatt-hours per year.

The Haliade-X turbine will stand on a tower 150 meters tall and have a 220 meter rotor, with blades longer than a football field. GE expects to invest $400 million in the project. The company plans to make that money back with the unusually high power: its 12-megawatt generator is capable of powering 16,000 homes, GE says. For comparison, the current generation of the Haliade model turbine generates 6 megawatts.

GE Renewable Energy plans to ship the first turbines in 2020. It will be designed and manufactured primarily in France. LM Wind Power, a Danish blade manufacturer owned by GE after an acquisition last year, will work on figuring out how to “industrialize” a project of this size.

“There’s a lot of manual labor involved,” says Vince Schellings, team lead at GE Renewable Energy. “You need as many as 250 workers working on a single machine, and all kinds of scaffolding and tooling to properly handle the material. Building a blade of this size requires a lot of people with strong team synchronization and collaboration to handle materials and tooling.”

Additionally, some of that work has to take into account the forces which will act on blades of that size once they have been built. “You catch a lot of wind, which is good for energy production, but the downside is that you need the support structure to keep the rotor up in the wind,” Schellings says. “It’s kind of unfortunate that as you scale the rotor size, the turbine costs will go up quicker than the incremental yields you get from the larger rotor.”

The estimate of the power produced was based on wind conditions on the German North Sea.

Wind turbine technician is one of the fastest-growing jobs in the United States in 2017, according to the U.S. Bureau of Labor Statistics, second after solar photovoltaic installation.