Students built a 3D-printed model of a jet engine to show off the capacity of Rolls-Royce’s Xplorer-1 engine and additive manufacturing. 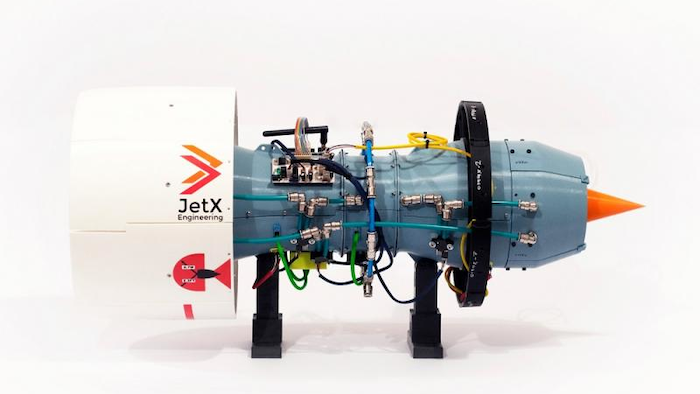 Students at the JetX jet engine club at the University of Glasgow built a 3D-printed model of a jet engine to show off the capacity of Rolls-Royce’s Xplorer-1 engine and additive manufacturing. While the engine is essentially a large teaching tool, it’s notable for its intricate 3D-printed parts and the look it gives into the inner workings of the engine.

More than 50 students participated in the project, which was highlighted as part of the 3D Hubs Student Grant. They’ve been working on the Xplorer-1 since 2013 and have a second project, Xplorer-2, in the works. The first engine was built from more than 965 3D printed parts, 300 fasteners, and 10 integrated sensors. Materials used include PLA, ABS, Nylon, PETG, and others printed on a desktop FWM printer.

The Xplorer-1 uses compressed air to replicate the realistic firing of the engine. In order to make the experience of building it as accurate to professional, current jet engine design as possible, each piece was modeled to match current aero-propulsion theories. Students performed computational analyses to examine how flow might change throughout the engine, including how the parts would need to take into account specific in-flight forces and landing conditions. Solidworks Flow Simulation, ANSYS Fluent & Star CCM+ were used on some parts, such as single stators, rotors, or multi-stage segments, to choose optimum designs when multiple designs were available.

Program founder Chris Triantafyllou found 3D printing to be the easiest option for manufacturing the model. “The transition from CAD to part is simpler and the amount you spend goes a long way with 3D printing especially when using an FFF 3D printer,” he said.