Toy Companies Break Down Barriers To Be More Inclusive

Many of the products breaking down the barriers started with smaller businesses, but big names like Mattel and Hasbro are getting into the game and offering lots more options this holiday season. 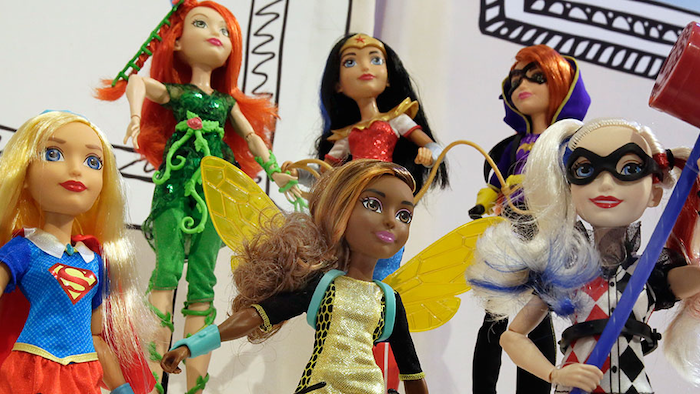 NEW YORK (AP) — Toy companies are working harder to think outside their usual box, offering more-inclusive items like dolls with disabilities, female superhero figures and characters with a range of skin tones.

Many of the products breaking down the barriers started with smaller businesses, but big names like Mattel and Hasbro are getting into the game and offering lots more options this holiday season.

What that means on the shelves is Barbies that have a greater variety of body types, eye colors and facial structures, a Lego mini-figure of a boy who uses a wheelchair, and an American Girl doll with accessories like a diabetes kit and arm crutches in addition to the hearing aids and service dogs it has offered before. Other items include coding toys, robots and circuit builder sets aimed at both girls and boys. 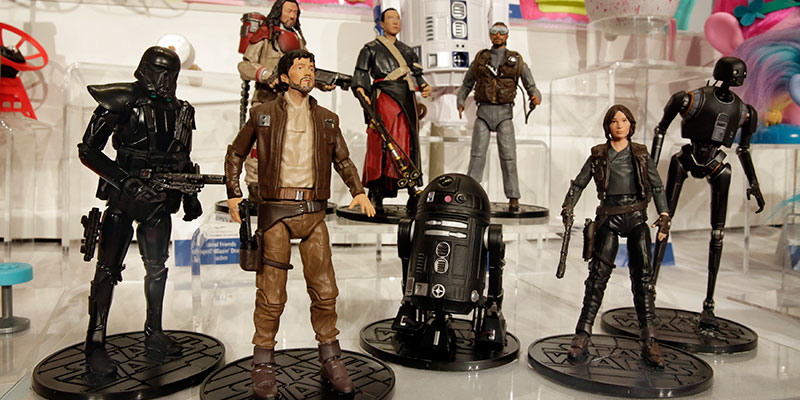 This Thursday, Oct. 6, 2016, photo shows the Star Wars Rogue One Elite Series characters, from The Disney Store, on display at the annual TTPM Holiday Showcase, in New York. Toy companies are offering products that are more inclusive, from Barbie dolls in all shapes, sizes and skin tones to baby dolls aimed at boys. Toy companies are also offering dolls that represent different disabilities. But still experts and parents say more work needs to be done. (AP Photo/Richard Drew)

Jennifer Weitzman, whose 5-year-old daughter Hannah has cochlear implants, has the American Girl doll with hearing aids and a Tinker Bell doll with a cochlear implant that Weitzman bought from a British site called ToyLikeMe.org.

"She lit up when she was given them. She thinks it's awesome that they have implants just like her," said Weitzman, of Mount Kisco, New York. "For many kids, it helps them identify and makes them feel included."

The trend started a few years ago, pushed by parents who didn't see enough diversity in the toy aisle and were turning to the internet or startups to find items.

Increasingly, the inclusiveness in the toy aisle means dolls with disabilities. Toys R Us has carried an exclusive line since 2013 called Journey Girls, which includes a wheelchair and a crutch set. Its partnership with American Girl to carry the Truly Me collection starting this month will include dolls that also use crutches, diabetes kits and wheelchairs.

While Lego has had larger figures before that use wheelchairs, the mini-figure introduced this year comes as part of the "Fun in the Park" set, mixed in with several figures that don't.

"The designers were thinking about what might you see in the park in the city," said Lego spokesman Michael McNally. 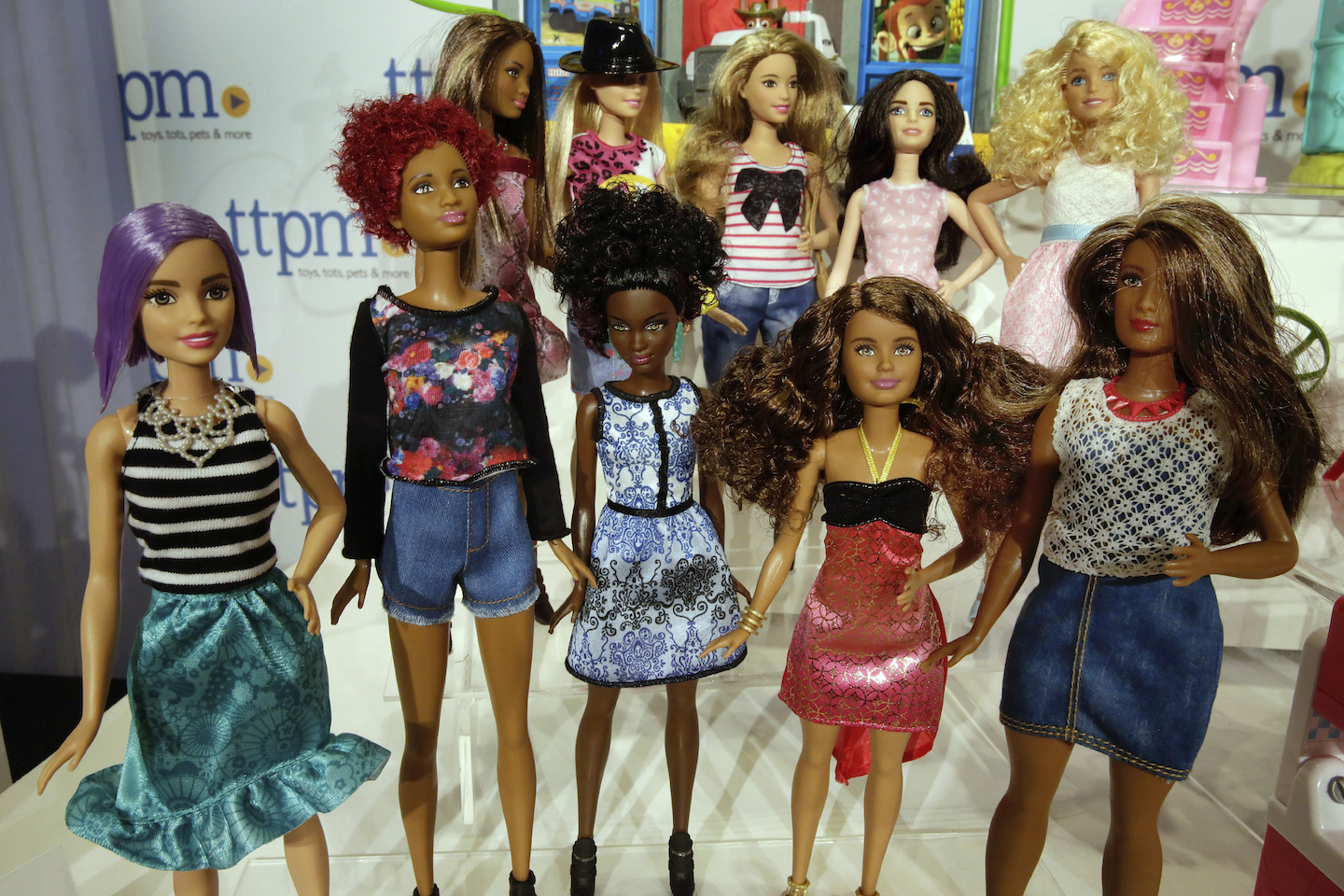 Lego mini-figures had been yellow so that children could imagine their own identity for the characters. "We've always been about helping kids find themselves," McNally said. But in 2004, it introduced flesh tones when representing real-life personalities.

Experts say it's critical for children to play with toys that don't perpetuate stereotypes about what's considered beautiful. They say the toys children play with have lasting impressions on their careers and their confidence.

"There's been some good progress, but there is a lot of work that needs to be done," said Elizabeth Sweet, a sociologist and lecturer at California State University in Sacramento, California. "Kids need to see themselves in the toys and objects they interact with."

For building toys, the company GoldiBlox, founded in 2012, was among the first to disrupt the pink aisle by offering construction sets aimed at girls. But it also realized it needed more racial diversity, and last fall introduced a black character called Ruby Rails and has since then added a Latina engineer called Valentina and other characters.

Many experts have been closely watching the moves made by Mattel, particularly with its iconic Barbie, whose business has been rebounding amid a makeover after seeing its sales suffer. The nation's largest toy maker launched the Barbie Fashionista collection last year that offered more skin tones, eye colors and facial structures. This year, it added three body types — curvy, petite and tall. It said those items have been doing well. Spokeswoman Michelle Chidoni says the company is also looking to add different body shapes to the Barbie career line and the Fairytale doll collection.

Racial diversity can also be key. American Girl, which is owned by Mattel, launched a doll this year whose story is that she is growing up in civil rights-era Detroit. Wal-Mart's My Life As doll collection has expanded the number of skin shades available, and Hasbro is adding more skin tones to its Baby Alive doll for next year.

Beyond introducing dolls and games that feature all kinds of characters, companies are starting to think differently about toys that have traditionally been aimed at boys or girls. The White House held a conference on gender stereotypes in media and the toys, drawing executives from major toy companies.

Target Corp. phased out gender-based signage in the toy aisle last year. It also was for a time the exclusive seller of Mattel's D.C. Super Hero Girls, including Wonder Woman and Batgirl, which were the first 6-inch action figures designed for girls. They join other female characters in the action figure aisle that include Black Widow and Star Wars heroine Rey, says Jim Silver, editor-in-chief of TTPM, an online toy review site.

Wal-Mart Stores Inc. is selling its first 18-inch boy doll this holiday season under the My Life As brand, and Hasbro plans to launch a boy doll under the Baby Alive brand next year.

John Frascotti, president of Hasbro Brands, cited My Little Pony, which originally was aimed at girls, and Nerf, which was traditionally for boys. Hasbro found the brands attract both boys and girls, so three years ago, it launched Nerf Rebelle that was styled for girls. As for My Little Pony, it's expanding into comic books, usually more a domain for boys.

"We are focusing on storytelling and worrying less about gender," he said.