Photos Of The Day: US Navy Gives Look Inside Futuristic $4.4B Zumwalt Destroyer

The 610-foot-long warship has an angular shape to minimize its radar signature and is the most expensive destroyer built for the Navy. 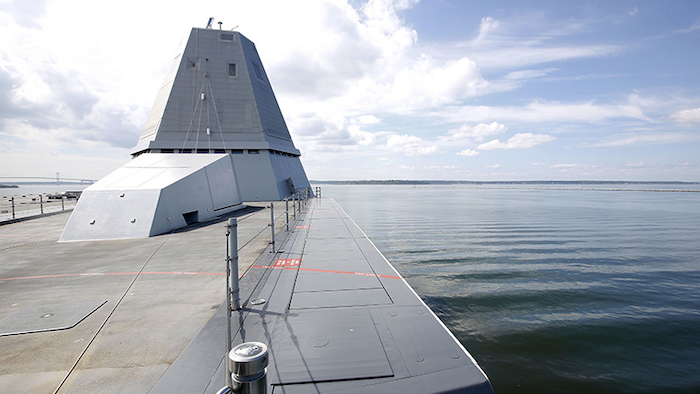 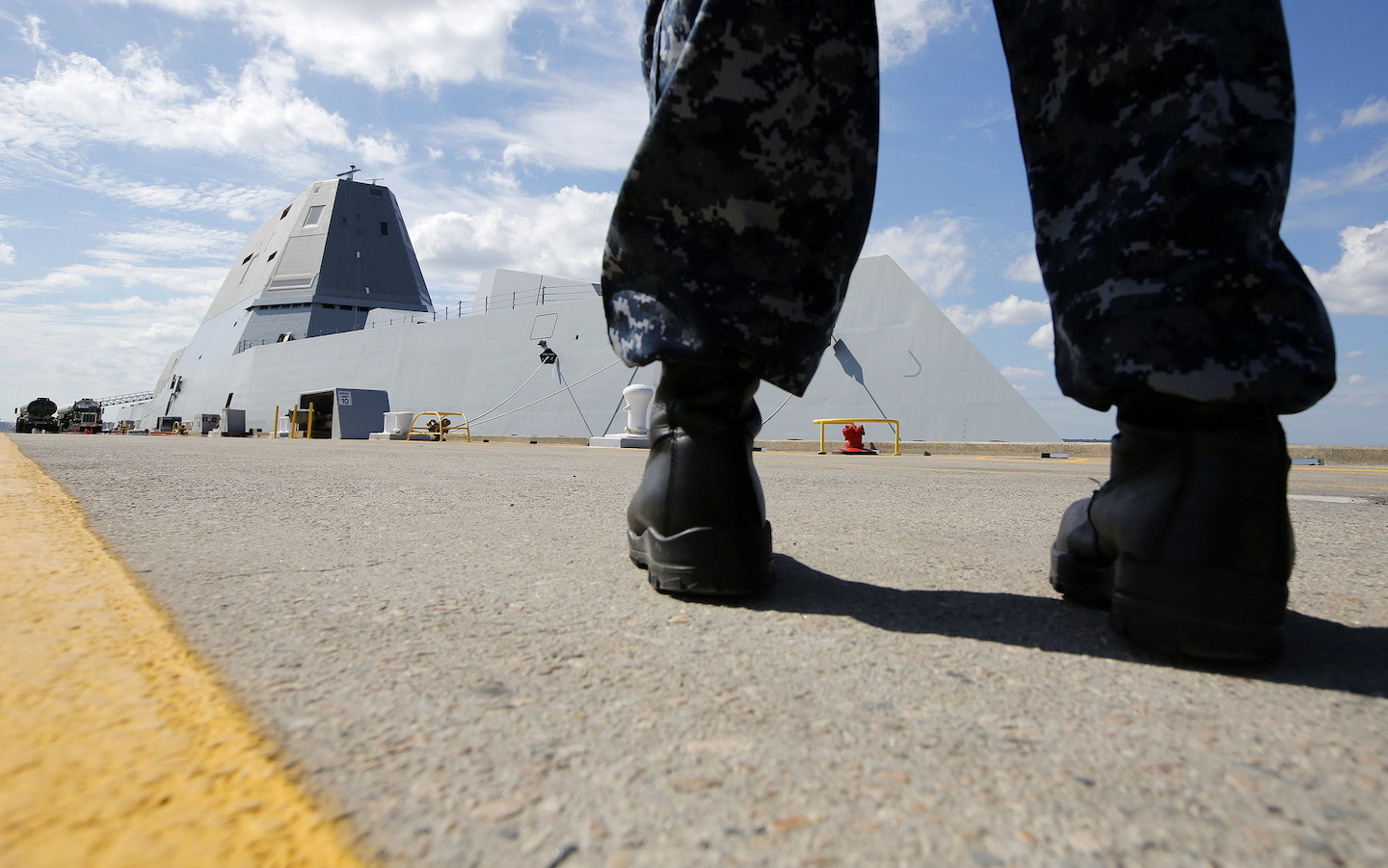 The Navy gave a first look inside the stealthy and futuristic Zumwalt destroyer on Friday during the ship's first port stop at a Rhode Island naval station.

The 610-foot-long warship has an angular shape to minimize its radar signature and cost more than $4.4 billion. It's the most expensive destroyer built for the Navy.

It's headed from Naval Station Newport to Baltimore, where it will be commissioned in October before going to its homeport in San Diego. It was built at Bath Iron Works in Maine. 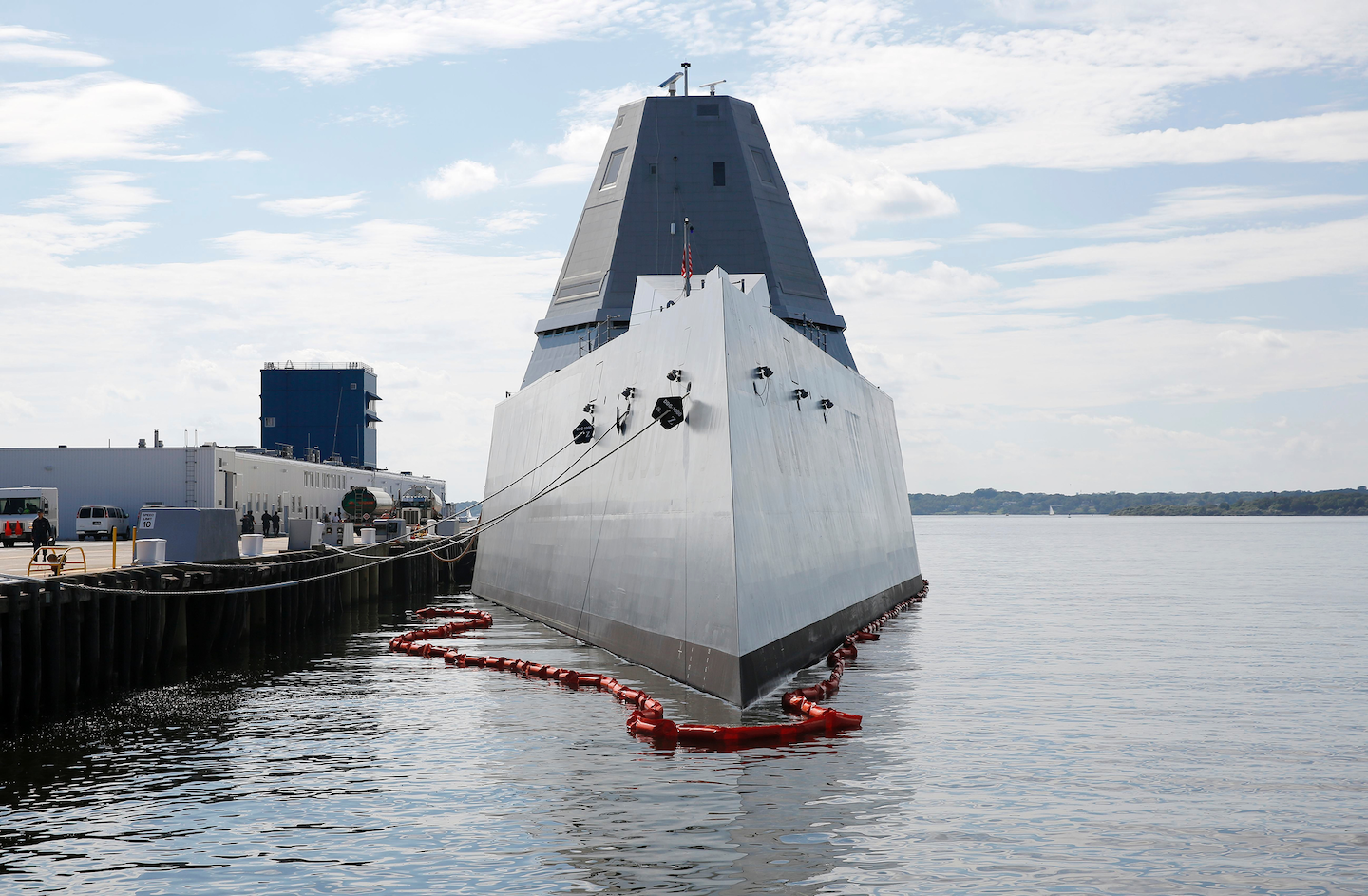 During a tour, the Navy showed off the ship's bridge, weaponry and mission center.

In the bridge, there are 180-degree windows and chairs for the ship's captain and executive officer to command the vessel. They overlook two gun mounts that resemble cannon barrels. The Zumwalt's powerful new gun system can unload 600 rocket-powered projectiles on targets more than 70 miles away.

In the mission center, about two dozen people can sit at consoles with multiple computer screens to plan missions, ranging from land attack and air defense to anti-submarine and anti-surface warfare and support for special operations forces. There's a large flight deck and two small boats on board in a bay that special operation forces can use. 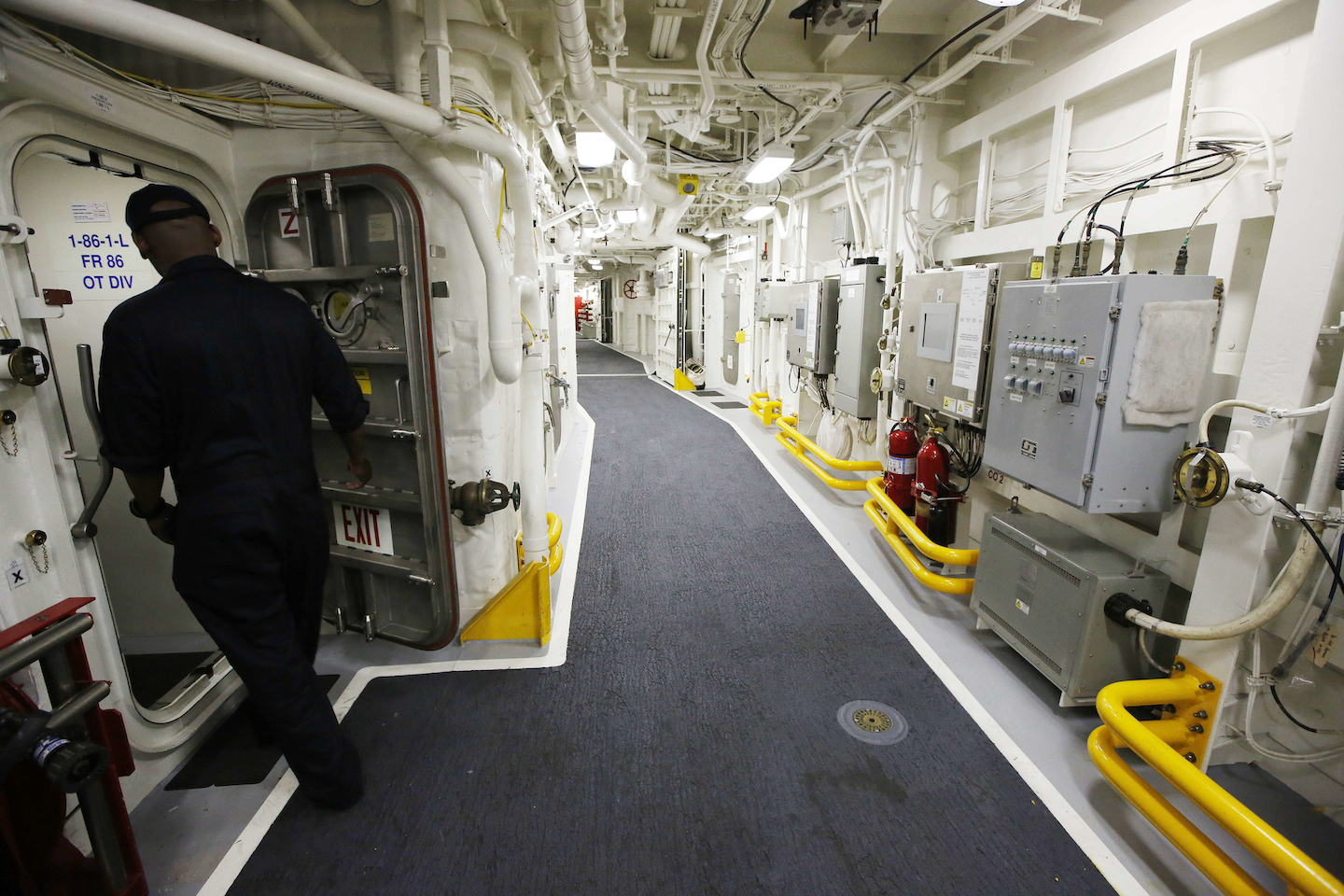 It looks like a much smaller vessel on radar and it's quieter than other ships, which makes it hard to detect, track and attack.

Vice Adm. Tom Rowden mans, trains and equips the surface ships of the Pacific fleet, which will include the Zumwalt. He said Friday the Zumwalt will make a significant difference.

Its advanced technology and capabilities allow it to do a range of defensive and offensive missions, and project power, wherever it is needed, and that's generating tremendous excitement within the Navy, Rowden said. He said the Zumwalt will be a "very stabilizing" sight for allies and partners, and perhaps a "menacing" sight for potential enemies.

And, the Zumwalt's unique and significant capability to generate power could be used in ways perhaps not even envisioned yet, such as in the testing and use of laser and directed-energy weapons systems, Rowden said. 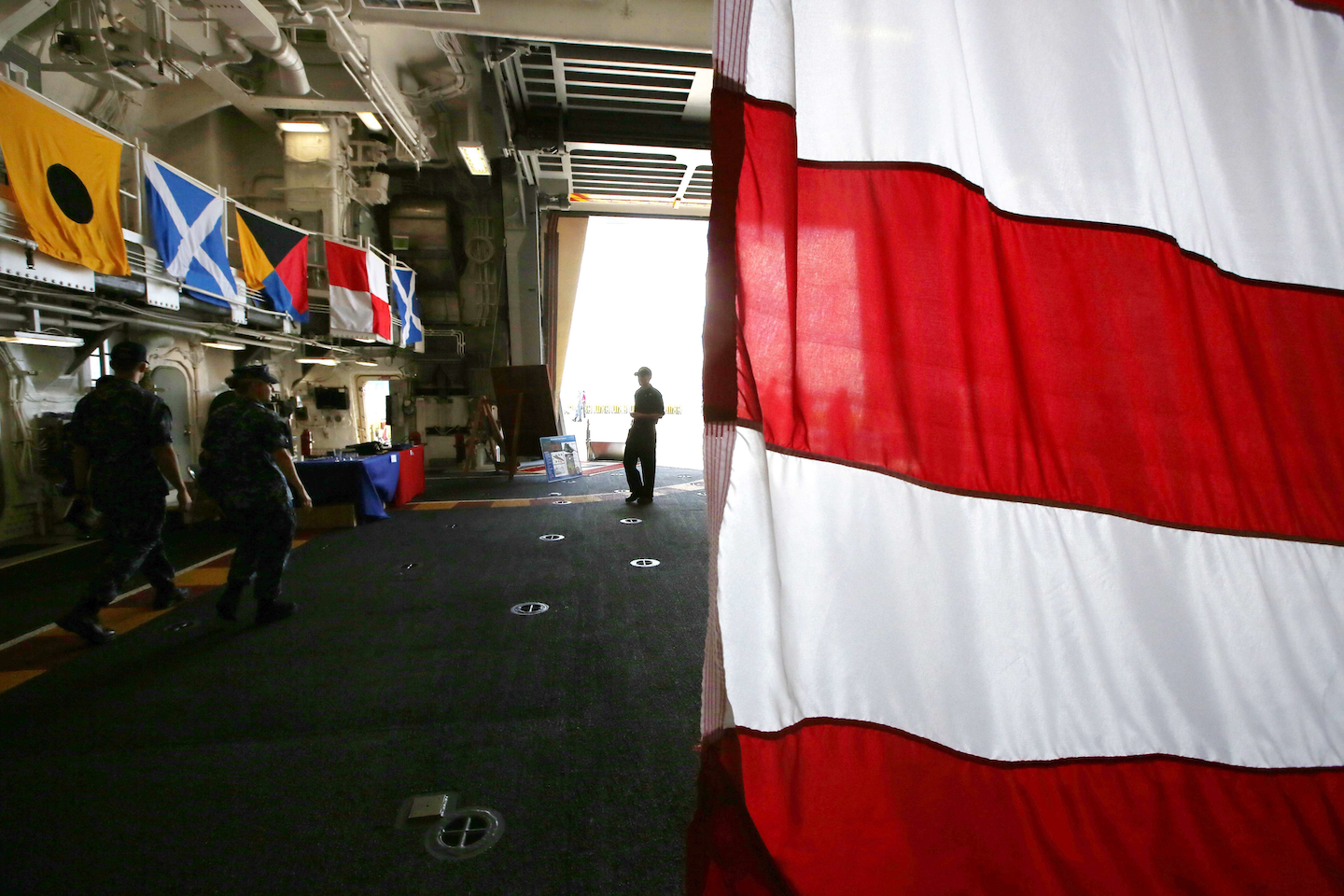 The ship is named after the late Adm. Elmo "Bud" Zumwalt, who earned the Bronze Star in World War II and commanded small boats that patrolled the Mekong Delta in Vietnam. He became the youngest chief of naval operations and earned a reputation as a reformer, who fought racism and sexism.

Capt. James Kirk, the ship's commanding officer, has pictures of Zumwalt and books about him in his office. Kirk said that the ship's commissioning will bring the admiral's legacy as a reformer back into the fleet. 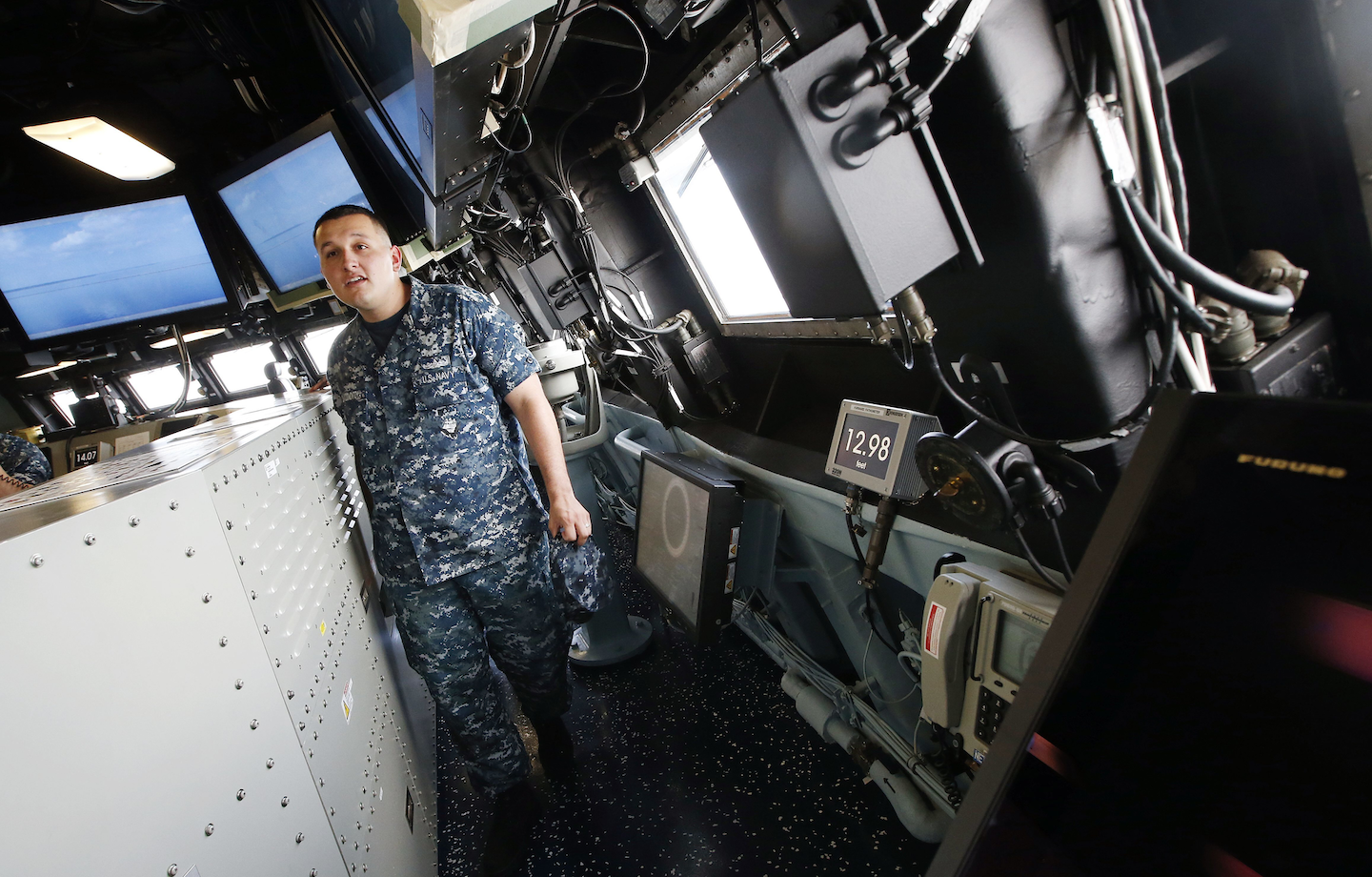 Kirk said the Zumwalt's crew of 147 officers and sailors possess a high level of technical expertise, great teamwork and mental and physical toughness.

When asked about the inevitable comparisons of the Zumwalt to Star Trek's Starship Enterprise and the skipper to the fictional Captain Kirk, the real Capt. Kirk said it does come up "every now and again," but noted that he was named after his grandfather and his parents weren't Trekkies. 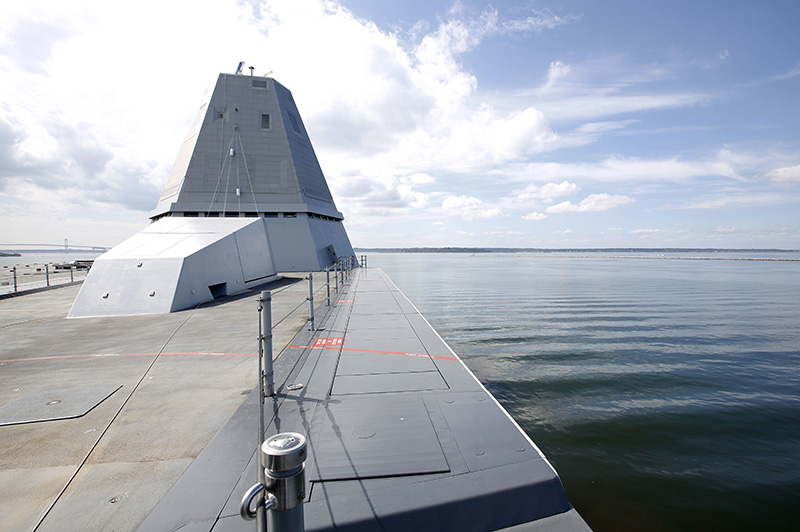 "But the first day I showed up at the Naval Academy, someone said, 'I can't wait till you're a captain,'" he said with a smile.

Additional equipment will be installed on the ship in San Diego, systems will be tested and the crew will train. Rowden said training and testing will last through 2017 and into 2018. He didn't speculate when the first deployment will happen.

U.S. Sen. Jack Reed, a Rhode Island Democrat, visited the Zumwalt on Friday, and he and Rowden said technologies aboard will likely be added to other classes of Navy ships moving forward.