A small company has developed a hockey puck-shaped product packed with an artificial attractant crabs and lobsters love. 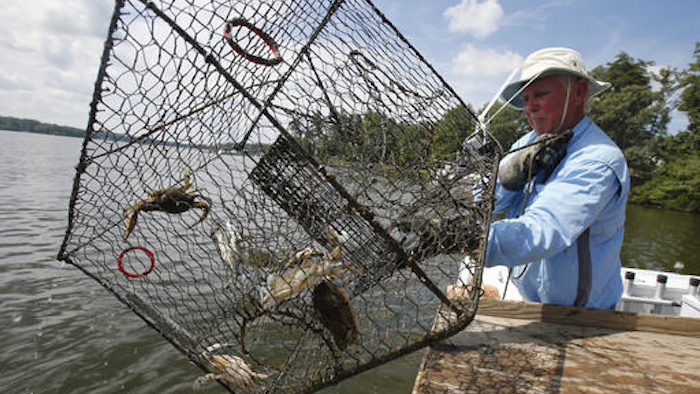 Fisheries for lobsters and crabs have grappling with a shortage of bait that synthetic bait may help with. (AP Photo/Steve Helber)

Lobster and crab fishermen have baited traps with dead herring for generations, but an effort to find a synthetic substitute for forage fish is nearing fruition just as the little fish are in short supply, threatening livelihoods in a lucrative industry.

With about $1 million in funding from the National Science Foundation, a small company has developed "OrganoBait," a hockey puck-shaped product packed with an artificial attractant crabs and lobsters love.

Commercial fishermen have long experimented with alternative baits. They have tried other fish species, processed slabs of horseshoe crab, even cow hide and pigs feet. Some products remain on the market; many have gone quickly.

No one has made commercially successful synthetic bait, and even animal-based alternatives don't always gain market acceptance, said Bob Bayer, a professor of veterinary science at the University of Maine who studies lobsters and has worked on attractants for 30 years.

"If somebody comes up with a good one, it will be used," Bayer said. "If it's effective and cost effective."

The lobster catch has been booming, but the fleet is suffering the most acute bait shortage facing the fishing industry. Lobster traps typically are baited with herring. However, not enough herring are being caught in the waters far off New England.

If prolonged, experts say, the shortage could raise the price and reduce the availability of lobsters and crabs.

Development of synthetic baits could cut into the $20 billion U.S. bait fishery, which dates to the Colonial era and plays a role in some other commercial fisheries, as well as in food products and nutritional supplements. Fishermen caught more than 200 million pounds of herring and 1.2 billion pounds of menhaden in 2014.

New England fishing managers are guiding the industry through a shortage of herring offshore by limiting the number of days they can fish closer to the coast. Without the restrictions, officials say, fishermen would be at risk of exceeding quotas the government establishes to protect fish species from overexploitation. 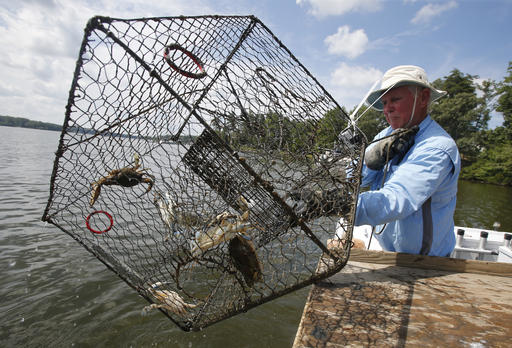 Fisheries for lobsters and crabs have grappling with a shortage of bait that synthetic bait may help with. (AP Photo/Steve Helber)

OrganoBait, developed by the Greensboro, North Carolina, firm Kepley Biosystems, is different from other alternative baits. It's not an animal product, but instead a calcium-based tablet made with synthetic materials that replicate the smell of decaying fish to attract lobsters and crabs.

"This is an area that can benefit from some science and technology," Dellinger said. "You can just eliminate the bait sector and it will be more fish in the ocean. Less impact on sea turtles, dolphins, all of the cute little critters."

In coastal Virginia, blue crab fisherman Malcolm Luebkert is one of a handful of fishermen testing out the synthetic bait, and he said he's bracing for a future when bait fish shortages become the norm. So far, he said, the synthetic alternative seems effective.

"When menhaden becomes scarce, we need an alternative, and we need one that's good," he said.

Mark Pfister, a bait dealer who intends to sell OrganoBait in Florida once it is on the market, said the early returns on stone crabs are promising. The price point for the product has not been determined, though Dellinger said it will be priced competitively with bait fish, which can cost about 30 cents per pound.

"There have been baits out before, but they've all failed," Pfister said. "This one looks like it's not going to fail."

Getting fishermen on board will present challenges. Stephen Train, a lobster fisherman based in Long Island, Maine, said he's more inclined to suffer high prices and volatility in bait fish availability than take a chance on an unproven alternative.

"I don't know if it would fish," Train said.