Meet Octobot, A Robot That's A Real Softie, And Cheap

The latest revolutionary robot isn't what you'd expect: It's squishy, wireless, battery-less and made for pennies by a 3-D printer. 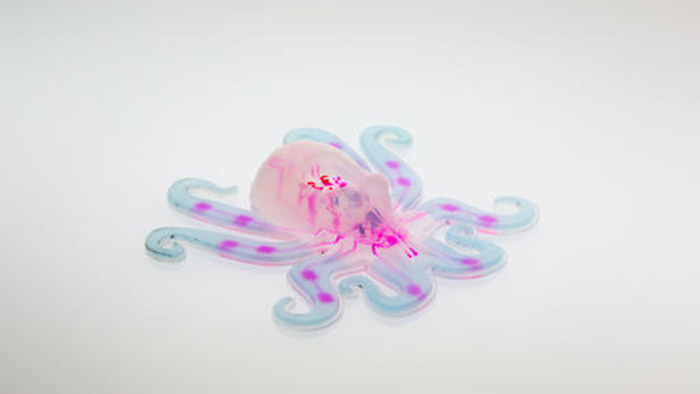 The latest revolutionary robot isn’t the hardened costly machine you’d expect: It’s squishy like Silly Putty, wireless, without a battery and is made for pennies by a 3-D printer. (Ryan Truby, Michael Wehner, and Lori Sanders, Harvard University via AP)

The latest revolutionary robot isn't the metallic, costly machine you'd expect: It's squishy like Silly Putty, wireless, battery-less and made for pennies by a 3-D printer.

Meet Octobot. It looks like a tiny octopus and is designed to mimic that slithery creature to get through cracks and tight places, making it ideal as a rescue robot.

A team at Harvard University has created a robot — actually about 300 of them, since they are so cheap to make — that is opposite of the common view of a robot. Soft, not hard. Flexibl,e not rigid. It's not mechanical, nor electrical. It's powered by fluids. The discovery is described, photographed and on video in the scientific journal Nature on Wednesday.

"It's sort of a hybrid between octopus and robot," said study author Jennifer Lewis, a Harvard professor of biologically inspired engineering. "We've done something that nobody's been able to do."

Soft robotics are important because "you've got these hard mechanical objects and soft humans" and when they interact — or collide — it can be a problem, Lewis said. That's not the painful case with Octobot, which fits in the palm of a hand. It's softer and more adaptive, she said. 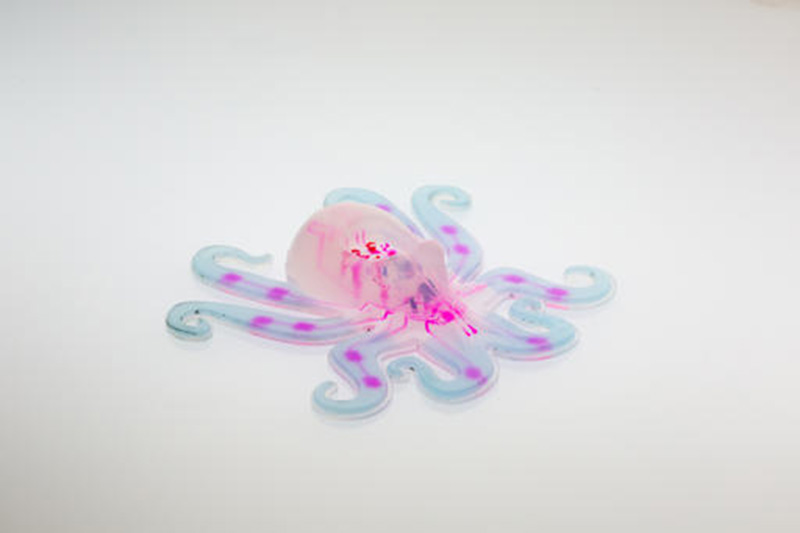 The latest revolutionary robot isn’t the hardened costly machine you’d expect: It’s squishy like Silly Putty, wireless, without a battery and is made for pennies by a 3-D printer. (Ryan Truby, Michael Wehner, and Lori Sanders, Harvard University via AP)

Here's a reality check: So far, all Octobot can do is wiggle a bit. It can't really even move along a table yet, so this is an "extremely simple first step," Lewis said.

Initially it was supposed to be a spider, but the team wanted both swimming and crawling and it looked more like an octopus, Lewis said.

The idea is to make this something that is powered by a chemical reaction in fluids; fluid movement moves the arms and directs the robot's actions. It can be printed cheaply by the 3-D printer with the most costly part a really small bit of platinum. Aside from that it is essentially like bathroom caulk, "a rubbery-type object," Lewis said.

Outside robotic experts raved about the new squishy machine.

In an email, Tufts University professor Barry Trimmer called it "an ingenious approach to building and controlling a completely soft robot."

Daniela Rus at MIT said the discovery was what the soft robotics community has been looking for: "The octopus robot is a first self-contained soft robot system whose components are all soft — it is a very beautiful machine."