The New Gear China's Military Will Show Off At Commemorative Parade

Fueled by booming defense spending, the People's Liberation Army is expected to showcase breakthroughs in missile technology and military aircraft. 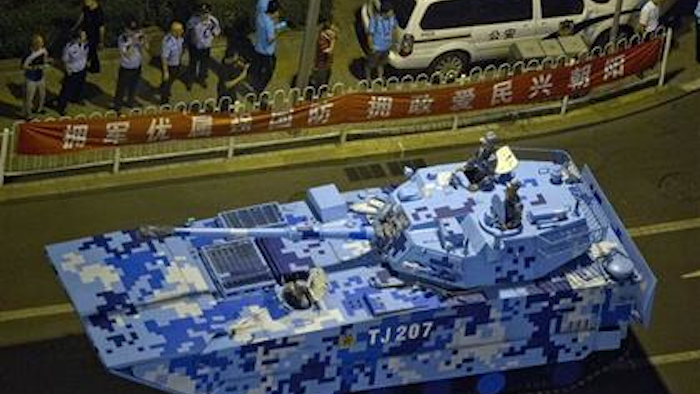 When China rolls out its latest armaments Thursday for a lavish parade commemorating the defeat of Japan in World War II, defense experts and foreign armies will be watching closely for any revelations about new military capabilities.

Fueled by booming defense spending, the People's Liberation Army is expected to showcase breakthroughs in missile technology and military aircraft that reflect its increasing focus on projecting force beyond its borders, especially adjacent seas where it competes with neighbors for territory and resources.

The parade will feature more than 12,000 troops, upward of 200 planes and helicopters and around 500 pieces of equipment, including tanks, rocket launchers and missiles of all sizes and ranges. China says more than 80 percent of the gear is being shown in public for the first time.

Of greatest interest are China's strategic weapons: bombers and missiles capable of attacking targets thousands of kilometers away. That's of particular concern to the U.S. and its allies in the region, especially Japan, with whom China has tussled over mineral rights and the ownership of uninhabited islands in the East China Sea.

China's rising capabilities also expose the vulnerability of Taiwan, the self-governing island democracy that Beijing claims as its own territory and threatens to conquer by force if necessary.

China's missile corps, formally known as the Second Artillery, has long served as its most potent means of projecting force abroad, and new developments are always closely scrutinized. Unlike the United States and Russia, China is not bound by the 1987 Intermediate-Range Nuclear Forces Treaty and has poured resources into developing missiles with ranges of 500 to 5,000 kilometers.

Observers will be looking for an appearance by the DF-16, a short-range ballistic missile loaded two to a truck, along with the DF-21D, an intermediate-range, anti-ship ballistic missile capable of sinking an American aircraft carrier in a single strike.

A new-version cruise missile, the DH-10, and upgraded DF-31A and DF-41 intercontinental ballistic missiles would also attract interest, although it is the mid-range missiles that most concern Andrei Chang, Hong Kong-based editor of the magazine Kanwa Asian Defense.

Chang said China appeared to be extending the range of the DF-16 to allow it to hit U.S. assets in Guam and other targets. Any appearance of the missile at the parade might suggest it is operational.

Equally attention-grabbing is a new-version bomber, the H-6K, based on the former Soviet Cold War-era Tu-16. China's official Xinhua News Agency says 90 percent of its on-board technology has been upgraded and has been "independently developed for long-distance precision strikes."

Han M. Kristensen of the Federation of American Scientists said the bomber would be equipped with the DH-20 land-attack cruise missile, giving China the capability of hitting targets as far away as Australia. Only Russia and the U.S. are currently able to launch cruise missiles from the air.

China's homegrown J-10 fighters and J-11 and J-16 copies of Russian Sukhoi jets have also featured in rehearsals, along with its Z-19 attack helicopters and transport choppers. Not seen so far are the J-31 and J-20 "stealth" fighters currently in development.

China's development of cutting-edge jet fighters is set to give it an overwhelming edge over Taiwan. Estimates say China could have about 1,500 so-called fourth-generation fighters by 2020, compared to about 350 on Taiwan, according to Rick Fischer, a long-time analyst of the Chinese military at the International Assessment and Strategy Center, a U.S. think tank.

China's 2.3 million-member People's Liberation Army is the world's largest standing military and its growth has been fueled by annual increases in the defense budget of 10 percent or more, pushing total defense spending to $145 billion this year, the second-most after the United States.

Beijing states that the parade is all about commemorating the past and demonstrating its commitment to safeguarding the peace. Yet the mass display of marching troops and the latest Chinese hardware seems calculated to broadcast China's rising military might, reflecting the tougher lines on sovereignty being pushed by President Xi Jinping, who also chairs the government and Communist Party committees commanding the armed forces.

"We will never yield so much as an inch of our territory to foreigners," states a new recruiting video for the Chinese navy, which recently added an aircraft carrier to its fleet. "We will never relinquish even the tiniest amount of our resources."

Among the scores of armored vehicles, tanks and mobile artillery featuring in the parade, observers will be watching especially for the latest iteration of China's main battle tank. Like much of the conventional arsenal, the MBT-3000 is geared toward the export market, where China seeks to compete with Russia and others by offering increasingly high-tech products at rock-bottom prices.

China's mighty military display may please the home audience, but is largely being shunned by the U.S., Japan and other major democracies. U.S. Department of Defense spokesman Bill Urban told The Associated Press on Tuesday that the parade "would not appear to be conducive" to the theme of reconciliation between former foes.

In particular, the show of short- and medium-range ballistic missiles may harden attitudes toward Beijing by casting it as a destabilizing factor in global military affairs. And while China-Russia ties appear to be warm — Russian President Vladimir Putin is scheduled to attend Thursday's parade — China's missile deployments are fueling suspicions in Moscow about Beijing's long-term intentions, said Kristensen, of the Federation of American Scientists.

Already, China's missile capabilities are bringing it closer to being able to overwhelming the defenses of a Japan-based U.S. Navy aircraft carrier battle group, Fischer said.

"This very near-term Chinese capability has dire implications for the ability of the United States to fulfill defense treaty obligations in Asia and to defend U.S. interests like sustaining global access to sea lanes in the South China Sea," Fischer said.