“I hate looking into crystal balls, but we can look into this one and say that in five years we’ll have unmanned aerial vehicles in every ship.” 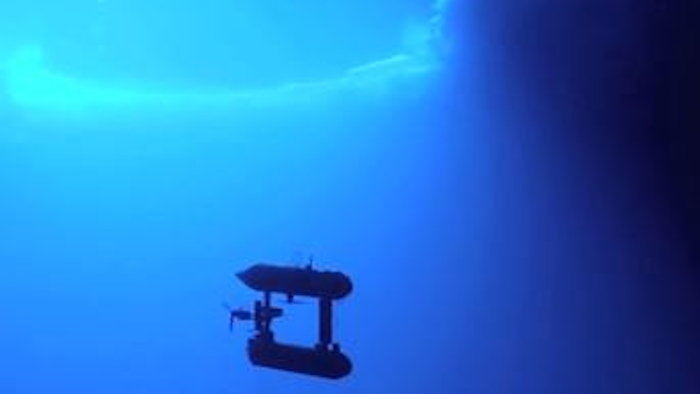 This fall, a small fleet of robots were sent an urgent message: “Run away!”

The sea gliders deployed by the Office of Naval Research raced south, outrunning the freezing ocean.

Working both in concert and isolation, these and many other autonomous underwater vehicles (AUV) and unmanned aerial vehicles (UAV) are used to explore the changing environment of the Arctic. The Association for Unmanned Vehicle Systems International brought ocean engineer Hanumant Singh and Office of Naval Research Arctic Program Officer and Science Advisor Martin Jeffries together to talk about how robots are used to study the ice.

The hardware and software that run unmanned vehicles in the Arctic must be hardened against the extreme environment and have excellent acoustic communication with their mother ship, since ice, and therefore the vehicles portals to the ocean water, are always moving.

“One of the most fundamental differences in the underwater environment is that if the robot had some failure mode the simple thing to do is drop a weight and come back to the surface … under ice that’s absolutely the wrong thing to do. If the robot would come up under sea ice, ice breakers, even though they do break though ice, cannot go through easily to any given spot,” Singh says.

Acoustic transmissions containing GPS coordinates are used to lead the researchers to the robots in order to find the best access points for them, whether they’re working correctly or floundering. This is actually easier in the Arctic than it is elsewhere in the ocean, since the water underneath the ice is itself very quiet.

Changes in the behavior of the Arctic ice over the last few years have made some of this exploration easier. Jeffries works as part of the ONR Emerging Marginal Ice Zone Project, a large endeavor looking at a new marginal ice zone in the Beaufort Sea north of Alaska. A marginal ice zone is the seasonal region where the ice shelf meets the open ocean. Ice has been retreating in the Arctic since at least 1979, changing the location of the marginal zone. More open water means more area that the Navy needs to explore, since it could potentially operate there.

“The goal is to help the Navy improve its numerical forecasting and prediction capabilities so the Navy would have the best possible ice and weather forecasts should it need to send a surface vessel or vessels into the Arctic,” says Jeffries.

Other changes have been observed as well. Near-surface temperature maximum areas, patches of ocean that stay warm during the winter, melt the bottom of the ice cover in a way that has never been seen in the arctic before. Chlorophyll levels have also changed:

“This is an autumn bloom of algae, and this is good to see, if you will because this adds to the evidence that primary production in the Arctic Ocean is not occurring only in the spring and summer now, but there’s a secondary bloom also occurring in the autumn,” Jeffries said. “Primary production is now being spread across the year if you will, or the open water season.”

This was the first time sea gliders were used in the Arctic Ocean, although they have been used in the Davis Strait, between Canada and Greenland, by researchers from the Applied Physics Lab at the University of Washington.

The acoustic sources were placed about 100 meters under the ice, and were used to position the other vehicles.

Their performance was even more successful than expected, in part because of the extreme stratification of the temperature in the ocean. Signals weren’t scattering off of the rough bottom of the ice because of a degree of stratification which did not previously exist, Jeffries said. This allows the researchers to use the acoustic communicators instead of dead reckoning when they need to find their vehicles.

Next, Martin wants to see whether sea gliders can be used for longer missions, working in and around the ice for a full year. The vehicles’ battery life isn’t a limitation, but small problems with the complexity of the software systems and the redundancy of the hardware mean it isn’t quite ready yet.

Another area in which Singh hopes to go more high-tech is in replacing scout helicopters with drones. Now, many ice breaker ships carry helicopters in order to map large areas and plot the best routes through thin ice. However, acquiring and running a helicopter is expensive. Off-the-shelf commercial drones could do the same work, Singh says.

“I hate looking into crystal balls, but we can look into this one and say that in five years we’ll have unmanned aerial vehicles in every ship,” he says.

For now, AUVs will continue to swim and float under the surface of the Arctic, giving researchers a close look at the weather, ice flows, and topography of the Earth’s newest open ocean.