The new products could be an important step for the emerging industry of "smart" homes. 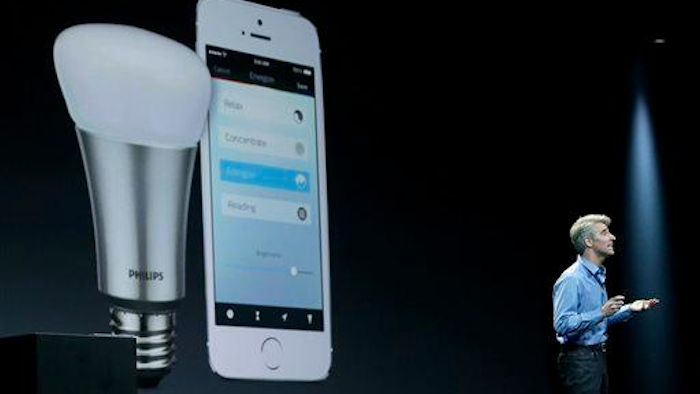 The first "smart" home gadgets that can be controlled by Apple's voice-activated digital assistant are going on sale this week, just days after rival tech giant Google announced it's building its own software for Internet-connected home appliances and other gadgets.

The new products could be an important step forward for the emerging industry of "smart" or "connected" homes, where appliances, thermostats and even door locks contain computer chips that communicate wirelessly. While a number of companies are working on similar products, analysts say Apple could persuade more consumers to try them by making it easy to control different products from a familiar device, such as the iPhone.

Apple announced its "HomeKit" software project a year ago, but isn't making the new products. Instead, other companies have been working to make devices that meet Apple's criteria for compatibility and security. Two manufacturers are now selling products and three more are accepting online "pre-orders" or plan to begin selling in coming weeks.

HomeKit-certified products hitting the market Tuesday include wireless hubs from two companies, Insteon and Lutron Electronics. The hubs, about the size of a small home router or cable TV box, act as the central controller for lights and other gadgets. The hubs in turn can be managed with a smartphone app.

Lutron Electronics, for example, is selling a $230 starter kit that includes its "Caseta Wireless Smart Bridge" hub and two dimmer units — either wall switches or plug-in units for lamps — controlled by the hub. Insteon says its hub will work with compatible lights, power switches and thermostats. Three other companies say they expect to start selling HomeKit thermostats, power plugs and climate sensors in coming weeks.

You can already buy similar products from these companies, which have their own smartphone apps to control them. The tie-in with Apple means a user can control those apps with Siri, the voice-activated digital assistant on Apple's iPhones and iPads. Users must link with an Apple TV box to control from outside the home.

Apple also says products using HomeKit software must meet standards for compatibility, so they work with HomeKit products made by other manufacturers, and for encryption, which keeps hackers from taking over a system or stealing user information.

While Apple wants Siri to play a leading role in "smart" homes, its biggest rivals want in, too. Google announced last week that it's creating software called Brillo as a common platform for Internet-connected gadgets in the home or in commercial settings. Microsoft and Samsung are also promoting software to control home systems.