A small fleet of self-driving cars is maneuvering through traffic in California using an array of sensors and computing power. Here are some things to know about these cars of the future. 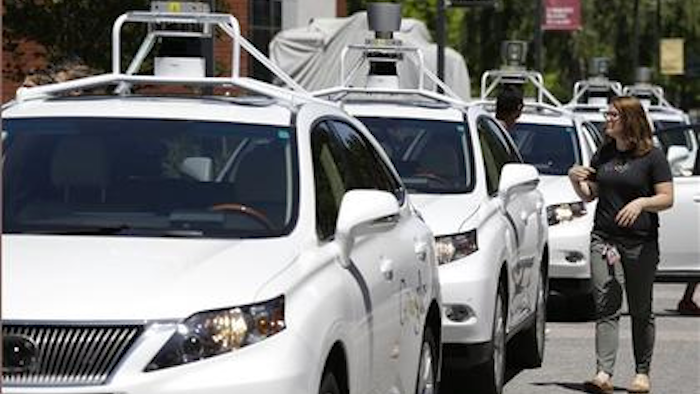 A small fleet of self-driving cars is maneuvering through traffic in California using an array of sensors and computing power. Drivers are required to be along for the ride, but much of the time, they keep their hands off the steering wheel and brake and gas pedals.

Here are some things to know about these cars of the future:

Since September, the seven companies permitted to test the cars on public roads have been required to report any collisions to the state Department of Motor Vehicles. A total of 48 cars have permits. In response to questions from The Associated Press, the state said four accidents have been reported since September. Google Inc. then said Monday that its cars had been hit 11 times since 2009. Over those six years, they traveled about 1 million miles with the car driving, and 1.7 million miles total.

The companies rolling with the most cars are not traditional automakers — they're run by by Silicon Valley billionaires.

According to the DMV, Google has permits for 23 Lexus SUVs, while electric car maker Tesla Motors has 12 vehicles. Audi, Mercedes-Benz and Nissan have three vehicles each; parts suppliers Bosch and Delphi each have two.

The DMV is still drafting rules for when the general public can get behind these wheels. Google executives said their timeframe is the next few years, but others say it will take decades before truly self-driving cars proliferate.

For now, the DMV has licensed 255 people to sit behind the wheels during this testing phase.

Google has the most what it calls "safety drivers," with 159, the DMV said. The agency said Audi has 30 licensed drivers, but the automaker said it has 27. Nissan has 17; Tesla 16; Bosch 12; Mercedes-Benz 12 and Delphi nine.

Google was driving its cars on public roads before California passed a law regulating testing. "Since the start of our program 6 years ago, we've driven more than 700,000 miles autonomously, on both freeways and city streets, without causing a single accident," spokeswoman Katelin Jabbari said. Google said later Monday that its updated total was closer to 1 million self-driving miles. Google also said its cars have traveled "the equivalent of over 15 years of typical human driving" since September. That would be about 140,000 miles.

The other companies wouldn't say how many miles their test cars have driven since September.

Nevada, Michigan and Florida also have passed laws permitting self-driving cars on their roads, and regulators there said they were not aware of any self-driving car accidents since then. Because other states have not expressly outlawed the cars, companies may test elsewhere — though the four states with rules have just about every driving condition and terrain.