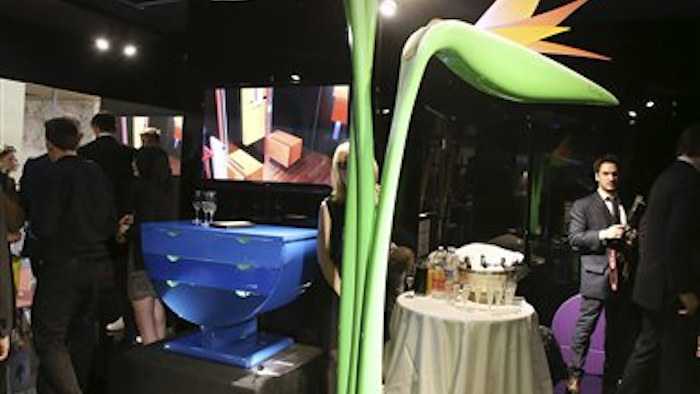 The sprawling show, which closed Sunday, is the largest in the world, capitalizing on Italian excellence in furniture design and craftsmanship. The weeklong happening, which spills out into Milan venues with numerous side events, is also increasingly the launching pad for high-level collaborations among the fashion, architecture, technological and design worlds.

"The market is big and growing for those who have a strong brand," said the presiding chairman of the international furniture show, Kartell CEO Claudio Luti, noting that visitors from 160 countries were on hand to see new products from some 2,400 furniture makers at the Rho convention center near Milan. "It is a great opportunity and a great recognition of the quality of innovation."

GET A CHARGE OUT OF YOUR FURNITURE

At the end of a long day, both user and mobile phone are out of juice. In the dream house of the near future, there's no more fumbling for phone chargers. Just plunk down your device on a surface with a built-in wireless charging station.

Powermat wireless recharging technology is being incorporated into Corian surfaces, the DuPont creation that can be molded into virtually any shape and purpose, making it ideal for kitchen countertops, bathroom surfaces and tabletops — any of which now can become a charging station. The energy transfer is through magnetic induction, not electricity, meaning "there is no chance of sparkage," said Scott Eisenstein, a Powermat vice president.

DuPont envisions the broadest initial application in public spaces, say, restaurants, airports or train stations where mobile device charging can be monetized. But DuPont also sees a market niche for the technology as a luxury feature in private homes.

"DuPont Corian is so far ahead of the curve in recognizing that wireless power charging needs to be in places where you find yourself every day," Eisenstein said.

Until the wireless technology becomes standard in mobile phones, Powermat has bridge technologies in the form of charging phone cases or a charging ring that plugs into the device. Each need to be placed on a specified spot on the surface, where the energy transfer can be made.

For design aficionados, there is nothing more galling than finding out that a competitive neighbor also bought that coveted Philippe Starck chair. Now, thanks to a concept launched on the sidelines of the furniture show, buyers can customize their own designer furnishings.

Seven designers, including Starck, Sebastian Bergne, Sam Hecht and Kim Colin, have designed "naked" furnishings — chairs, tables, sofas — for an inaugural collection of a new brand concept dubbed Tog, short for together. Consumers can choose from colors and combinations offered by the designers. But Tog coordinator and designer Nicola Rapetti said the concept also establishes a network of so-called customizers who offer additions of their own. For example, one Dutch "customizer" offers knit covers for chairs, and the possibilities for collaborations within the Tog community, as it grows, is endless.

Eventually, Starck envisions that 3-D printing will expand the concept even further.

Starck called Tog "a philosophy, a political idea" because it brings mass production to design, which will bring down prices.

"It's a high-tech miracle," Starck said. "You have a guy somewhere who will make a beautiful object, just for you."

A temporary store was opened in Milan this week and the first permanent store will open in Sao Paolo, with more to follow. There is also a website, www.togallcreatorstogether.com .

The Pucci fashion house has teamed up with the Bisazza ceramic makers to create splashy wall mosaics featuring archival Pucci patterns. The collaboration was born out of friendship between Laudomia Pucci and Rossella Bisazza, women who have taken over the historic Italian brands founded by their fathers.

While Bisazza has collaborated with designers before, this is its first with a fashion house.

"The idea is to transfer the print from garments to interiors," Bisazza said in the brand's Milan store. "It is a way to decorate the house."

Three of the creations are envisioned as wall hangings, pieces of art in limited editions of 99. Each bold, geometric mosaic is made from hand-cut stones and takes six mosaic makers 200 hours to assemble. The collection also includes three more-industrialized products that can be installed directly on interior walls.

"It has been a great collaboration, also very easy, very quick," Bisazza said. "It is not always that way."

Fashion designers are increasingly expanding into home and furniture lines to complete their brands. Prada presented its CloverLeaf Sofa, a sectional that in its full, circular configuration creates intimate space for conversation with front-and-back seating. In its entirety, the sofa, which comes in velvety red, gold and green, commands a large space but can be broken down into elegant S-shaped seating, as Prada did in its via Montenapoleane womenswear store.

Missoni decorated an interior wall with plates in a mix-matched floral and zigzag design that it made in collaboration with the historic Tuscan porcelain company Richard Ginori.

Pierre Cardin, a pioneer in ready-to-wear fashion, also was one of the first fashion designers to branch out into furniture. Now his nephew, Rodrigo Basilicati, is spearheading a new collection of Cardin's so-called "Utilitarian Sculptures."

A high-back curved S-shaped chair with ever the slightest spring is part of the collection. It is made out of flexible birch, plied into curves and covered with lacquered paint. Each piece takes two to four months to produce in Cardin's native Veneto (the designer moved to France at age 2) and will be made by order in limited quantities of as few as eight.

Cardin, now 91, was on hand for the unveiling of the creations at the Milan fairgrounds, wearing a double-breasted suit jacket accented with a green kerchief. He promptly went about reorganizing the stand, banishing refreshments, overseeing the transfer to the corner of a heavy sculpted floor lamp in the shape of a giant plant and repositioning a light to better accentuate a bureau.

Kartell has returned to table wear, a line it abandoned in the 1970s, this time tapping the imaginations of three designers and three chefs for their ideal table settings.

Italian chef and restaurateur Davide Oldani wants his servers to know exactly how to place a plate before diners so he put a raised thumb print on his dishes for proper orientation. Andrea Berton and Carlo Cracco stuck to accessories, from serving plates for Cracco to sculpted bread dishes by Berton.

ARCHITECTS TRADE DOWN IN SCALE

Knoll continues its long tradition of collaborating with architects dating from Mies Van Der Rohe's Barcelona chair. This year, it has tapped London-based David Adjaye, who said he was apprehensive until "I understood that it would be an opportunity to express my position in terms of materials, silhouettes and forms."

Adjaye designed two chairs intended as complementary forms, one the skeleton and one the skin. Washington Skeleton is a solid sculpture, a curved intersection of crisscrossing lines, made of cast iron and either painted or copper-plated. Washington Skin is made from nylon that gives for a light backward bounce.

"My starting point was the idea of a seated person, and the form of the chair echoes this," Adjaye said. "The pattern is then a drawing of the forces required to brace this shape and make it a chair. It is like an exoskeleton."

While technology remains a driving force in home furnishing innovations, there were also many simple, low-tech solutions on offer.

A Dutch design team created pop-up furniture for temporary restaurants or festivals — a cushioned and heated bench for two with a built-in table that folds into a box for easy transport. The pieces, made for side-by-side dining or working, were dubbed Soullmate.