Could The Military Get Its Own 'Google Glass'?

The Q-Warrior features a full-color and high-luminance see-through display that is able to project symbols and videos directly onto the field of battle. This could include waypoints, other points of interest or even areas/buildings housing known enemies. 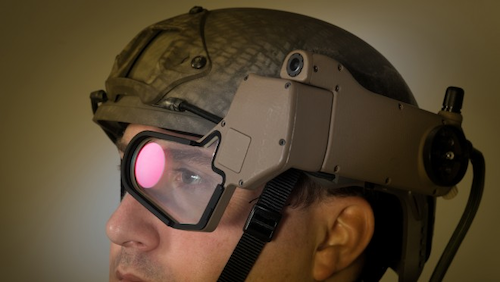 BAE Systems has unveiled its Q-Warrior helmet-mounted display technology, which aims to provide soldiers and Special Forces personnel with more real-time visual data. It looks a bit like a fighter jet pilot’s head's-up display, but has been designed specifically for the ground-level soldier who needs, for example, to be able to identify hostile versus non-hostile forces, or coordinate fellow soldiers.

The Q-Warrior features a full-color and high-luminance see-through display that is able to project symbols and videos directly onto the field of battle. This could include waypoints, other points of interest or even areas/buildings housing known enemies using already-gathered intelligence.

“Q-Warrior increases the user's situational awareness by providing the potential to display 'eyes-out' information to the user, including textual information, warnings and threats,” says Paul Wright, Soldier Systems' Business Development Lead at BAE Systems' Electronic Systems. “Other key features include enhanced night vision, waypoints and routing information, and the ability to track both personnel and assets.”

Although the technology may seem distant from what might be found on the plant floor, there’s a precedent for wearable technology to be utilized in manufacturing operations. Oftentimes, what begins as state-of-the-art military technology ends up being appropriated for other uses, so it’s not out of the question that a similar tech could be used my a plant manager in order to see, at a glance, which systems are operating on-schedule, or which motors are running hot could use a round of maintenance.

For example, Motorola Solutions has already developed its own HC1 Headset Computer, which can be used by manufacturing or warehousing staff to easily view important documents or statistics about the company while also relaying video from the plant floor to another location. There's no cabability to actively project data onto the plant floor via augmented reality as the Q-Warrior does — yet — but more than one company has seen the demand for wearable technology that can offer information in a more passive manner that allows employees to keep their hands free and at-work.

The philosophy is very much the same for the new Q-Warrior. BAE Systems says the Q-Warrior technology will first be deployed at the section commander level, although it could be standard issue kit for every soldier on the ground in the near future.

Wright added: “This is likely to be within non-traditional military units with reconnaissance roles, such as Forward Air Controllers/Joint Tactical Aircraft Controllers (JTACS) or with Special Forces during counter terrorist tasks.”