A multimedia artist is bringing his 12-foot American flag that's viewed with Google Glass to the National Portrait Gallery for a special President's Day weekend exhibition. "Portrait of America" by New York-based artist David Datuna is the first artwork to use Google's Internet-connected eyeglasses, organizers said. 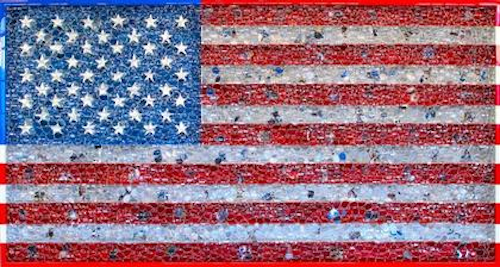 "Portrait of America" by New York-based artist David Datuna is the first artwork to use Google's Internet-connected eyeglasses, organizers said. It's part of Datuna's series of works entitled "Viewpoint of Billions." Datuna's "Portrait of America" will be on view Saturday, Sunday and Monday at the museum.

The flag installation is a collage made of plywood, newspapers and images of George Washington, John F. Kennedy, Martin Luther King Jr., Lady Gaga and other figures. The top layer is made of hundreds of eyeglass lenses that give the piece a different look from different vantage points.

In an interview, Datuna said he set out to tell a story that reflects American culture, its freedom of expression and the innovators who push the country forward.

Cameras embedded in the artwork and on Google Glass allow the viewer to become part of the artwork, and it evolves over time, exploring connections between art and technology. Visitors can have their portraits taken wearing Google Glass and share them on social media.

The National Portrait Gallery, which houses the U.S. presidential portraits, also is hosting a family day on Saturday with various activities for children and a story day on Sunday with a story about President Abraham Lincoln.