The birthday of what's called the world's first action figure is being celebrated this month by collectors and the toy maker that introduced it just before the nation plunged into the quagmire that would become the Vietnam War — a storm it seems to have weathered pretty well. 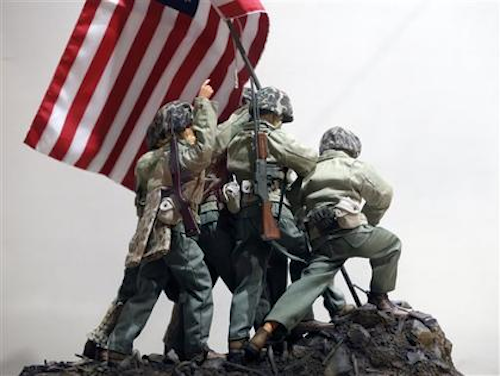 The birthday of what's called the world's first action figure is being celebrated this month by collectors and the toy maker that introduced it just before the nation plunged into the quagmire that would become the Vietnam War — a storm it seems to have weathered pretty well.

Since Hasbro brought it to the world's attention at the annual toy fair in New York City in early 1964, G.I. Joe has undergone many changes, some the result of shifts in public sentiment for military-themed toys, others dictated by the marketplace.

Still, whether it's the original "movable fighting man" decked out in the uniforms of the four branches of the U.S. military, or today's scaled-down products, G.I. Joe remains a popular brand.

But it's Don Levine, then the company's head of research and development, who is often referred to as the "father" of G.I. Joe for shepherding the toy through design and development. Levine and his team came up with an 11½-inch articulated figure with 21 moving parts, and since the company's employees included many military veterans, it was decided to outfit the toy in the uniforms of the Army, Navy, Marines and Air Force, with such accessories as guns, helmets and vehicles.

Levine, who served in the Army in Korea, said he got the idea for the moveable figure as a way to honor veterans.

But he and his team knew the product wasn't in Hasbro's usual mold, and it took years of pitches before Merrill Hassenfeld gave it the company's full backing.

"Most boys in the '60s had a father or a relative who was or had been in the military," said Patricia Hogan, curator at The Strong National Museum of Play in Rochester, home to the National Toy Hall of Fame. "Once you've bought Joe, you need to buy all the accessories and play sets and add-ons, which was great for business."

G.I. Joe hit the shelves in time for the 1964 Christmas shopping season and soon became a big seller at $4 apiece.

It remained popular until the late 1960s, as opposition to Vietnam intensified and parents shied away from military-related toys. Hasbro countered in 1970 by introducing "Adventure Team" G.I. Joes that played down the military connection. Into the '70s, G.I. Joes featured "lifelike hair" and "kung-fu grip" and were outfitted with scuba gear to save the oceans and explorer's clothing for discovering mummies.

Hasbro discontinued production later that decade. In the early 1980s, Hasbro shrank Joe to 3¾ inches, the same size as figures made popular by "Star Wars." It has stuck to that size, with the occasional issue of larger special editions.

Over the decades, G.I. Joe has spawned comic books, cartoons, two movies starring Channing Tatum, and a G.I. Joe Collector's Club and its annual convention — GIJoeCon — held in Dallas in April. But for many G.I. Joe fans of a certain age, the newer products hold no appeal.

"The 12-inch G.I. Joe built that company," said Tearle Ashby, of the New York village of Ballston Spa. "The stuff they put out now is garbage."

Ashby, a psychotherapist who turns 50 in June, played with G.I. Joes as a boy, but few survived, falling victim to encounters with firecrackers and little parachutes that failed to open.

On Saturday, he and other collectors plan to bring their 12-inch G.I. Joes to the New York State Military Museum in Saratoga Springs to celebrate the 50th birthday.

The exact date of G.I. Joe's introduction remains hazy. Ashby and others, including Hasbro, believe it was in February 1964 — but American International Toy Fair organizers say it was held in March that year.

Hasbro said it intends to announce details of its 50th anniversary plans during this year's fair in New York on Feb. 16-19.

G.I. Joe was elected into Toy Hall of Fame in 2004, six years after Barbie was enshrined. Hogan said the hall doesn't have policies prohibiting toy weapons from induction, although all candidates must be deemed safe. The U.S. was in the early stages of the wars in Afghanistan and Iraq a decade ago, so G.I. Joe's induction didn't meet the opposition it might have faced as the conflicts dragged on, Hogan said.

"I suspect," she said, "most people would have acknowledged that G.I. Joe really does belong in the Toy Hall of Fame."