Need a hand lifting something? A robotic device invented by University of Pennsylvania engineering students can help its wearer carry an additional 40 pounds.Titan Arm looks and sounds like part of a superhero's costume. But its creators say it's designed for ordinary people. 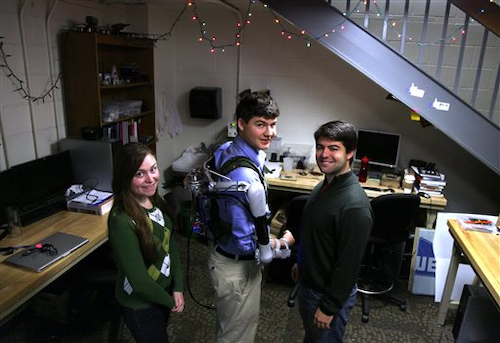 PHILADELPHIA (AP) -- Need a hand lifting something? A robotic device invented by University of Pennsylvania engineering students can help its wearer carry an additional 40 pounds.

Titan Arm looks and sounds like part of a superhero's costume. But its creators say it's designed for ordinary people — those who need either physical rehabilitation or a little extra muscle for their job.

In technical terms, the apparatus is an untethered, upper-body exoskeleton; to the layman, it's essentially a battery-powered arm brace attached to a backpack. Either way, Titan Arm's cost-efficient design has won the team accolades and at least $75,000 in prize money.

"They built something that people can relate to," said Robert Carpick, chairman of Penn's mechanical engineering department. "And of course it appeals clearly to what we've all seen in so many science-fiction movies of superhuman strength being endowed by an exoskeleton."

The project builds on existing studies of such body equipment, sometimes called "wearable robots." Research companies have built lower-body exoskeletons that help paralyzed people walk, though current models aren't approved for retail and can cost $50,000 to $100,000.

The Penn students were moved by the power of that concept — restoring mobility to those who have suffered traumas — as well as the idea of preventing injuries in those who perform repetitive heavy-lifting tasks, team member Nick Parrotta said.

"When we started talking to physical therapists and prospective users, or people who have gone through these types of injuries, we just kept on getting more and more motivated," said Parrotta, now in graduate school at the university.

So for their senior capstone project last year, Parrotta and classmates Elizabeth Beattie, Nick McGill and Niko Vladimirov set out to develop an affordable, lightweight suit for the right arm. They modeled pieces using 3-D printers and computer design programs, eventually making most components out of aluminum, Beattie said.

The final product cost less than $2,000 and weighs 18 pounds — less than the backpack that Beattie usually carries. A handheld joystick controls motorized cables that raise and lower the arm; sensors measure the wearer's range of motion to help track rehab progress.

Since its unveiling, Titan Arm has won the $10,000 Intel Cornell Cup USA and the $65,000 James Dyson Award. The resulting publicity generated a slew of interest from potential users, including grandparents who find it hard to lift their grandchildren.

"We found out that some people can't even lift a cast-iron pan to cook dinner," McGill said.

Experts say the aging population represents a potentially big customer base for exoskeletons, which originally were researched for military applications.

"There is certainly a market, but it's slowly emerging because the systems are not perfect as yet," said Paolo Bonato, director of the Motion Analysis Lab at Spaulding Rehabilitation Hospital in Boston.

Titan Arm's design impressed Yong-Lae Park, an assistant professor of robotics at Carnegie Mellon University in Pittsburgh who watched a video demonstration. He noted, though, that its low cost represent parts only, not the salaries or marketing built into the price of other products.

Park's research is focused on making exoskeletons less noticeable — "more like a Spider-Man suit than an Iron Man suit," he said.

The Titan team hopes to refine its prototype, although three members are now busy with graduate studies at Penn and one is working on the West Coast.

Among the considerations, Parrotta said, are different control strategies and more innovative materials and manufacturing.

And, of course, a second arm.