Alabama was too slow to guarantee the rights of minorities during the civil rights era, and now it's too slow to ensure the rights of people based on sexual orientation and gender identity, Apple CEO Tim Cook said Monday in challenging his home state to do better. Cook's comments came as he,... 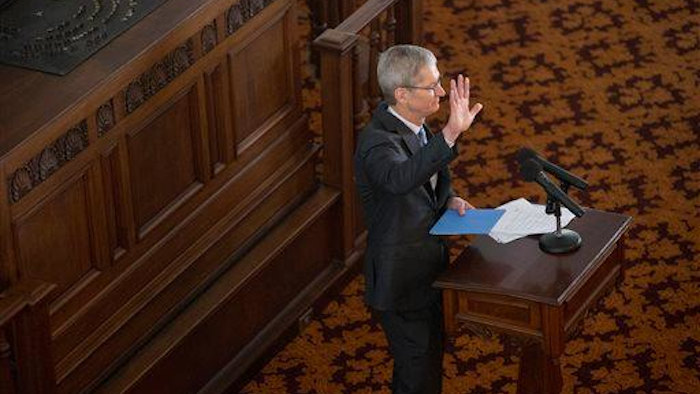 Alabama was too slow to guarantee the rights of minorities during the civil rights era, and now it's too slow to ensure the rights of people based on sexual orientation and gender identity, Apple CEO Tim Cook said Monday in challenging his home state to do better.

Cook's comments came as he, University of Alabama football coach Nick Saban and six others were inducted into the Alabama Academy of Honor, which recognizes living state natives for their contributions.

Speaking at the Capitol in the chamber where the state voted to secede from the Union in 1861, Cook said Alabama and the nation "have a long way to go" before realizing Dr. Martin Luther King Jr.'s dream of equality.

Alabama was "too slow" to guarantee rights in the 1960s, Cook said, and it removed a ban on interracial marriage from its Constitution only 14 years ago.

"And (Alabama is) still too slow on equality for the LGBT community. Under the law, citizens of Alabama can still be fired based on their sexual orientation," said Cook, a native of coastal Baldwin County. "We can't change the past, but we can learn from it and we can create a different future."

Alabama is among the states that do not recognize same-sex marriage, and it also doesn't offer legal protections on the basis of sexual orientation or gender identity.

Cook also called educational equality "one of the greatest civil rights issues of our times." Earlier this year, Apple said it would give $100 million for school technology, and Cook announced the money would go for equipment and training at 114 schools in more than 29 states, including five in Alabama.

"We at Apple view it our responsibility to step up and act," Cook said. The company is partnering with the White House on the project.

Cook is a native of Robertsdale who attended Auburn University. He succeeded Apple founder Steve Jobs as chief executive officer in 2011.

The Apple executive spoke on behalf of the group. He visited a Baptist church once pastored by King before the ceremony.