British police said Friday they have seized components of a gun made from plastic on a 3-D printer and are testing to see whether it was a viable weapon. The Greater Manchester Police force said officers found a plastic magazine and trigger, along with a 3-D printer, in a raid against suspected gang members. 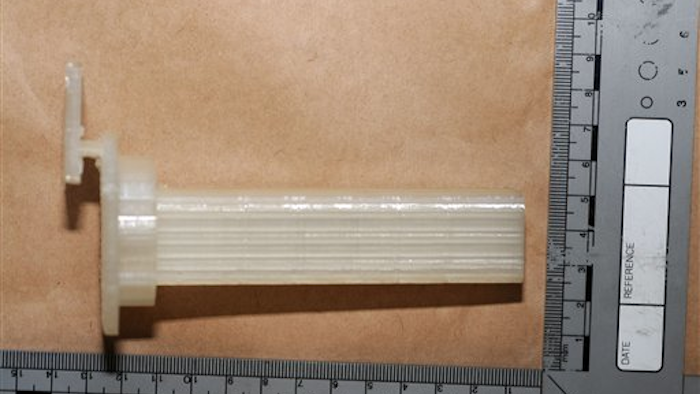 LONDON (AP) -- British police said Friday they have seized components of a gun made from plastic on a 3-D printer and are testing to see whether it was a viable weapon.

The Greater Manchester Police force said officers found a plastic magazine and trigger, along with a 3-D printer, in a raid against suspected gang members.

Forensic specialists are examining the parts to see whether the gun would have worked.

Police said that if the gun were viable it would be the first such seizure in Britain.

Earlier this year a Texas company said it had successfully test-fired a handgun created with a 3-D printer, and posted blueprints for the weapon online. Such printers can be paired with a home computer to manufacture objects using layers of high-density plastic.

Authorities worry the technology could allow anyone to manufacture guns which would pass unnoticed through metal detectors.

"These could be the next generation of firearms and a lot more work needs to be done to understand the technology and the scale of the problem," said Detective Inspector Chris Mossop of the force's organized crime unit.

Police said one man was being questioned on suspicion of making gunpowder.

According to a commenter at tech site The Verge, the Manchester police may have made a terribly embarassing mistake — the parts could very well be spare parts for a Makerbot Replicator 2 3D printer, which was also seized by the police. The "magazine" pictured above could, instead, be a holder for filament spools. The Greater Manchester Police has since released the following statement:

"We need to be absolutely clear that at that this stage, we cannot categorically say we have recovered the component parts for a 3D gun.

What we have seized are items that need further forensic testing by national ballistics experts to establish whether they can be used in the construction of a genuine, viable firearm.

We will also be conducting a thorough analysis of computers we have recovered to establish any evidence of a blueprint on how to construct such a weapon.

Clearly the fact we have seized a 3D printer and have intelligence about the possible production of a weapon using this technology is of concern. It prudent we establish exactly what these parts can be used for and whether they pose any threat.

What this has also done is open up a wider debate about the emerging threat these next generation of weapons might pose.

The worrying thing is for me is that these printers can be used to make certain components of guns, while others can be legitimately ordered over the Internet without arousing suspicion. When put together, this could allow a person to construct a firearm in their own home.

Thanks to Challenger, which is the biggest ever multi-agency response to organized crime in Greater Manchester's history, we now have even greater resources to combat any emerging threats posed by organized criminal gangs, which may include the production of these weapons.Under Challenger we will a multi-agency action plan for every single organized crime group in Manchester and we will target these networks from every possible angle, hitting them where it hurts."