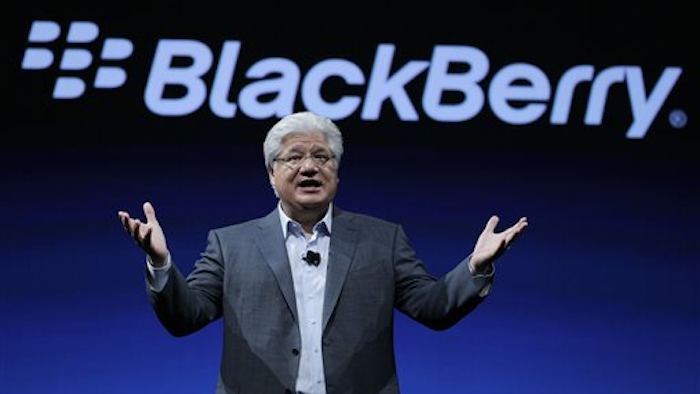 TORONTO (AP) -- BlackBerry founders Mike Lazaridis and Douglas Fregin are weighing taking over the distressed smartphone company as it searches for a savior.

The filing said Lazaridis and Fregin own 8 percent of BlackBerry.

Their announcement is the latest sign of investor interest in BlackBerry after the company launched a review to consider a possible sale or break-up of its operations. The Canadian company announced last month that Fairfax Financial Holdings Ltd., which owns close to 10 percent of the company, signed a letter of intent that "contemplates" buying BlackBerry for $9 a share, or $4.7 billion. Fairfax, BlackBerry's largest shareholder, is trying to attract other investors. Private equity firm Cerberus is also interested in looking at Blackberry's books as a step toward a possible bid.

The stock is trading below Fairfax's tentative offer on fears that the deal won't go through or that the final price will be lower. Shares of the company rose 9 cents, or 1.1 percent, to $8.20 Thursday.

The BlackBerry, pioneered in 1999, was once the dominant smartphone for on-the-go business people and other consumers. It could be so addictive that it was nicknamed "the CrackBerry." But then came a new generation of competing smartphones, starting with Apple's iPhone in 2007. The BlackBerry suddenly looked ancient. The company's sales and market share shrank and it lost billions in market value.

This year's much-delayed launch of BlackBerry 10 system and the fancier devices that use it was supposed to rejuvenate the brand and lure customers. It did not work. Waterloo, Ontario-based BlackBerry recently announced 4,500 layoffs, or 40 percent of its global workforce, and reported a quarterly loss of nearly $1 billion.

The founders may be invested in keeping the struggling BlackBerry from being broken up in a sales process.

"It's his baby. If anyone is going to see value in the company it's him," said BGC analyst Colin Gillis, referring to Lazaridis. "He founded this company. I'm sure it's not pleasant to watch the spot it is in and he sees value in it. It must hurt to see reports that this thing is going to get ripped up and fed to the vultures."

And Lazaridis has a reputation to protect. He has long been celebrated as a Canadian business hero, even appearing in the country's citizenship guide for new immigrants as a model of success.

A spokesman for Lazaridis, who owns about 5.7 percent of BlackBerry, said he would not comment beyond the filing. Fregin helped Lazaridis found the company formerly known as Research In Motion and served as vice president of operations before he left. The filling said the goal is "stabilizing and ultimately reinventing the company based on a plan developed by them."

The stock didn't rise much Thursday because it was widely expected that Lazaridis might make a bid, Gillis added.

The head of Fairfax, Prem Watsa, has also said he's not interested in buying BlackBerry to break it apart and that he wants to see it survive and exist in Canada.

Watsa and Lazaridis are friends — Lazaridis recruited Watsa to join BlackBerry's board when he stepped down as co-CEO in January 2012. It remains to be seen whether the two team up on a bid, Gillis said. Watsa told The Associated Press last month that Lazaridis was not involved when Fairfax made its conditional bid.

"The Special Committee, with the assistance of the company's independent financial and legal advisers, is conducting a robust and thorough review of strategic alternatives. We do not intend to disclose further developments with respect to the process until we approve a specific transaction or otherwise conclude the review of strategic alternatives," BlackBerry spokeswoman Lisette Kwong said in an emailed statement. She declined to comment on the filling by Lazaridis and Fregin.

Although BlackBerry was once Canada's most valuable company with a market value of $83 billion in June 2008, the stock has plummeted to less than $9 from over $140 a share. That gives it a market value of about $4.2 billion.