Worldwide shipments of personal computers fell in the third quarter of the year, the sixth straight quarter of decline as cheaper tablet computers and smartphones cut into demand, according to market research firms IDC and Gartner Inc. 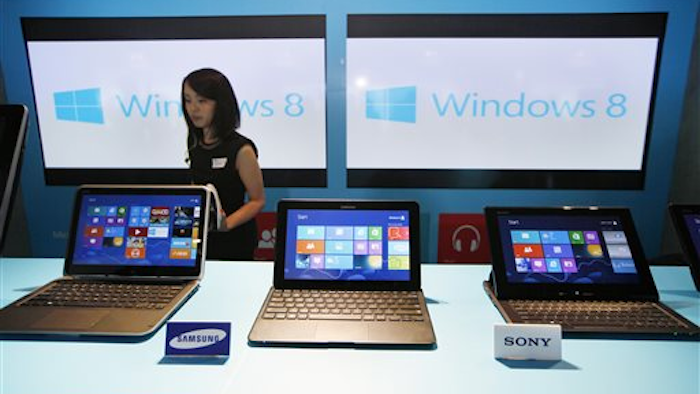 Worldwide shipments of personal computers fell in the third quarter of the year, the sixth straight quarter of decline as cheaper tablet computers and smartphones cut into demand, according to market research firms IDC and Gartner Inc.

IDC expects that the PC market will hit bottom sometime next year, with a recovery starting in 2015 as companies and consumers finally replace aging PCs. Gartner says this year will be the worst, with flat shipments next year and single-digit percentage growth in 2015.

"There's sort of a rubber band effect where PCs that need to be replaced will be," said IDC senior analyst Jay Chou.

Gartner principal analyst Mikako Kitagawa said that in developed countries, consumers won't abandon PCs, though they are holding onto them longer and spending money on other gadgets before replacing them. "The overall market size will shrink, but at some point those old PCs will be replaced by new ones," she said.

The outlook for a stabilizing PC market was mirrored by Hewlett-Packard Co., the world's No. 2 PC maker behind Lenovo. In a presentation before analysts Wednesday, the company predicted "stabilizing revenue declines" for its upcoming fiscal year, which starts in November.

The top 3 PC sellers — Lenovo, HP and Dell — all grew shipments between zero and 3 percent during the quarter, thanks in part to a healthy U.S. market, both research firms said. Acer and Asus suffered steep declines.

IDC said Acer and Asus suffered declines of about 34 percent, while Gartner pegged the drop at nearly 23 percent.

IDC said Acer suffered from weak consumer spending while Asus was hurt by a lack of corporate customers.